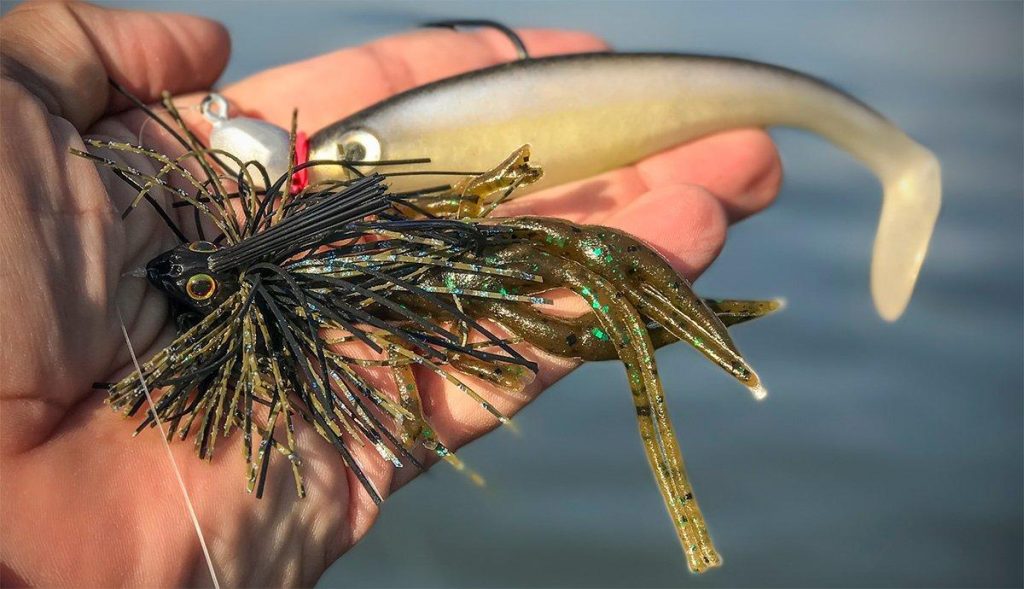 When I was learning to bass fish, the really good fishermen that I looked up to all told me the same thing â€” “you throw a jig if you want to catch big bass.”

Thirty years later, when guys ask me about bass fishing, especially here on Kentucky Lake, I tell them, “you throw the swimbait if you want to catch big bass.”

I’m certainly not advocating that everyone run home, empty their jig boxes and throw them in the trash. I don’t measure hypotheses with such extreme rationale. I’m interested in if other anglers have seen more of a trend in their fishing or others fishing where a swimbait is reached for more for big bass than a jig. Because I’m a student of bass fishing â€” the anglers, the fish, and especially the tackle. I field thousands of calls, messages, emails, texts a year asking about various lures.

I’ve probably had my hands on more baits than most and have non-disclosure agreements with most of the top tackle companies. Some folks think I’m the authority on current tackle options. But most guys trust I will give an honest opinion born from playing with a lot of tackle on the water in various situations and not just in a tackle shop. And I ask a lot of questions from folks who make lures and fish a lot.

In my observations recently, in not only my own fishing, but that of professional tournament fishing, local fishing, trends in tackle and just discussions with peers in and around fishing, the swimbait has become the hot commodity in the last decade. 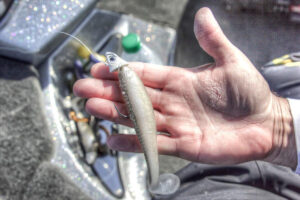 Certainly jigs still catch numbers of bass, catch big bass and win tournaments. So I don’t mean to say they replaced the jig as an option. But maybe it has been dethroned as the king of the big bass baits.

I think maybe part of it is a maturity thing, or a progression as an angler, where I went from wanting to get 100 bites every time I go fishing to being satisfied with only 5-10 bites as long as they are the big ones. 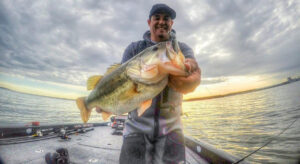 So many tournaments are getting won on a soft swimbait these days, where years ago it was a spinnerbait or a jig all the time. I know if you talk to guys who have lived their whole lives on the TVA, they will talk to you about how much clearer the water is now than it was 10 or 20 years ago and think that shift has a lot to do with lures that work better now than then.

Anglers have gotten better over the years. The bass are under more pressure now than any decade of the past that’s for certain. The waters are cleaner, meaning the fish probably get better looks at our lures.

Sure there are windows where you don’t have to exactly match the hatch, and in fact, going the polar opposite catches more bass. But it does seem that we are seeing more guys going with more subtle lifelike presentations to catch bass consistently, especially on highly pressured waters. I reckon mimicking forage is what a soft swimbait does very well. The Basstrix Paddle Tail, Keitech FAT Swing Impact, Reaction Innovation Skinny Dippers, Huddleston Deluxe Trout, and many others built strong loyal followings based solely on their effectiveness for catching big bass when a more realistic option was necessary.

The interesting thing is that’s the same reason a jig was and has remained such an effective lure for bass fishing. It’s very lifelike, and it looks natural even in the cleanest of water.

I would still argue that a jig is more versatile because a swimbait does not fish vertically as effectively as a jig. I have caught a lot of fish on swimbaits picking them up and dropping them back to the bottom. I’ve caught fish holding a swimbait in place below the boat and even on a drop shot. I can skip a swimbait under a dock like a jig and slow crawl it out or burn it just under the dock. I can throw a swimbait around bushes on weedless hooks and catch fish out of cover.

But a jig can be dunked in heavy cover, swam horizontally, drug on the bottom in deep or shallow water and not get hung up.

A swimbait is in its prime when it’s moving horizontally. So that does limit its options.

But consider my question: are bigger bass feeding on forage that sits in one place or swims and moves around horizontally, especially in the presence of said big bass?

This weekend I was fishing in 48 degree water. I had fished a small pocket with a crankbait. It was shallow in the back so I reached forâ€¦ my jig. Force of habit.

I knew I could pull it through there without getting hung up on any cover or rocks in that shallow water. I fished it through the area four straight casts. On the fifth cast, I lost my patience and reeled the jig in literally as fast as I could. A 6- or 7-pound bass bull rushed the jig swimming as fast as I’ve ever seen a bass swimâ€¦ in 48 degree water mind you — horizontal and overbearing.

I think that is where the swimbait might be taking over as the big bass bait of choice in fishing. There is something about the profile of a swimbait swimming aggressively through an area with a thumping tail that seems to enrage larger bass as opposed to a jig seemingly sneaking along the bottom.

As sure as I’m writing this, someone will go catch a record bass or win a tournament on a jig. Heck, Mark Rose won this past weekend at the FLW Tour on Lake Travis on a jig and a swimbait. Go figure. One thing for sure, bass fishing isn’t an exact science. No one has it all figure out. And no one lure will do it all. But it has been interesting watching the changing trends and adaption of the bass and the anglers related to lures like jigs and swimbaits.

What are your thoughts on swimbaits versus jigs for big bass? 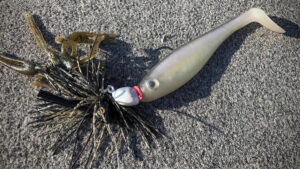 Land Your Biggest Bass with Swimbaits