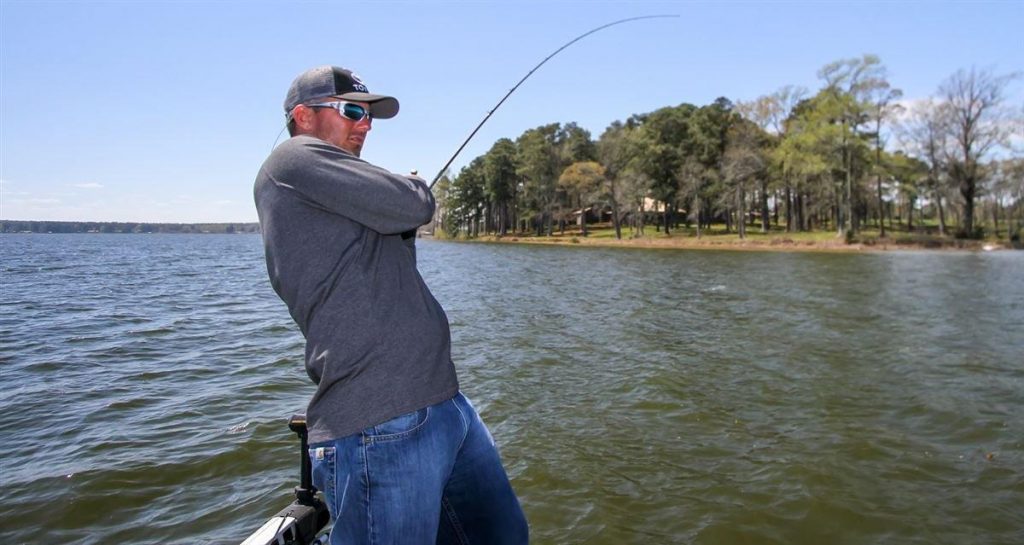 You’ve had the morning rally, squeezed out a few bites here and there, but now the sun’s high in the sky, the wind is light and frankly, fishing kinda sucks.

Don’t give up; there are always options and a good one for just about any time except the spawn is a milk run of main lake points. Deep water access, flat feeding areas, usually bristling with some kind of structure – these areas are a no-brainer to locate, they’ll indulge several different tactics and with a casual rotation among a handful of spots, you can easily fill those tough midday hours with a legitimate shot at bending rods.

Toledo Bend guide Darold Gleason notes that, unlike river systems, which benefit from periods of current flow, reservoir lakes are largely subject to the day’s weather. Cloudy or overcast skies can extend the active periods for bass, but generally, early and late define summer’s prime times.

“On the TVA lakes the fish get active when (the dam) is drawing current. But it’s just different on most reservoirs. The fish are either going to hunker down in grass or structure, or they’ll suspend around trees or brush piles.”

Next time you find yourself facing that midday slump and begging for a bite, consider that main lake points, while certainly not the only midday option, are definitely one of the best for a couple key reasons. For one thing, you’ll have no trouble finding these obvious topographic features and hopping point to point is no different than the pocket hopping of spring and fall.

“Because points usually have deep water nearby, they give the fish an opportunity to be near shallow water where they can pull up and feed with the option to back out,” Gleason said. “A lot of times in the summer, it seems like your baitfish, crawfish, bluegill and things like that are more likely to be around points.

“Also, on lakes like Toledo Bend, there’s usually a lot of structure on the points. So, with structure and deep water access, the fish can pull up on a piece of cover or multiple pieces of cover. A lot of times, I think the fish are just relaxing around the structure in the shade, and if you get lures near them, because they’re opportunistic, they’re likely to take a bite.”

Gleason summarizes his top choices for point duty: “In the midday, they’re not eating a lot, but they’ll eat a big meal, so a football head jig with a craw trailer is my first choice. I’ll also throw a Carolina rig, but I’ll use a small bait like a Trick Worm or a small creature bait.

“Another productive bait is a shaky head or drop shot with a finesse worm. If you’ve fished several points with a football jig or a shaky head, and you’re not getting bites, you might go to that lighter presentation.” 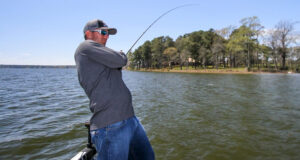 A STROKE OF LUCK

“A lot of times when they’re suspended and hitting crankbaits, stroking a jig works really well because it keeps it up in their face without being as quick as a crankbait,” Tutt said. “Stroking works best when there’s no grass because you can get it up and down, and the fish can see it better.”

For this technique, Tutt stresses alertness. He doesn’t expect the decisive strikes he gets from cranking, so sensory perception needs a high setting.

“You really have to pay attention; it’s a line-watching process. You can, however, catch some really big fish this way,” Tutt explained. “I pop it up off the bottom a yard or two, and I’m watching my line every time it goes back.

“You’ll see the line either tick, or it’ll just stop and go slack. When you see that or feel anything different, you want to set the hook. Don’t wait; it doesn’t cost you anything to set the hook.” 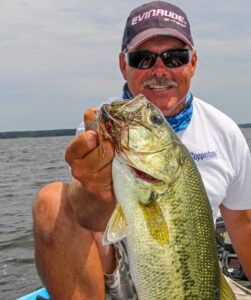 Effective presentation clearly matters in the stroking technique, but Tutt starts with proper jig preparation. Because he’s looking for a quick rise and a fast fall, Tutt trims about an inch off the body of a Strike King Rage Craw. This, he said, affords him the action that attracts fish with the hydrodynamics that lets the bait do what it needs to do.

“I also trim the skirt down so it’s a really small profile,” Tutt said. “That makes the jig fall faster because you don’t have a lot of bulk. You want that thing to go up and down, up and down quickly.”

Color is another key for Tutt, and one of his favorite summer looks starts with a green pumpkin jig and a green pumpkin skirt accented with brown, blue and orange to mimic southern bluegill – a summertime staple in the bass diet.

“Typically what I try to do on a jig is just match the hatch. You can hardly go wrong with green pumpkin or black and blue anytime, but those colors represent some type of forage,” Tutt said. “When it’s darker and cloudy, I go with a black and blue or black, blue and purple (jig/skirt). As it gets lighter and brighter, you want to go with more natural colors like green pumpkin, watermelon red or something like that.”

Now, during the midday lulls, even a good point can have its slumps. However, both Tutt and Gleason agree that persistence often pays off in a big way. You gotta mark fish or bait; otherwise, yours is a fool’s errand.

A notable example came during a hot summer day on Toledo Bend when Tutt was working a main lake point in about 17 feet of water. Tutt worked all around the point with a Carolina-rigged lizard, while I kept a dropshot wet, but a couple small fish didn’t reflect the quality on the graph.

Switching to his bluegill-imitating football jig, Tutt made a handful of stroking presentations and after a half dozen shots, he came tight on a good fish. My host couldn’t help but sigh in disgust when a 7-pound drum broke the surface, but he was quick to point out the up side.

“That’s a good sign,” he said. “They eat the same thing that a bass eats.”

Not 5 minutes later, Tutt’s jig bumped a stump, and the 4-pound largemouth waiting on the other side was all too happy to help himself to what must have looked a lot like a bluegill.

“When you have a spot that looks good, or you caught some fish there, or you see some fish on the graph, you don’t want to just make 10 or 12 casts with one bait and leave,” he said. “You want to try a couple different lures.” 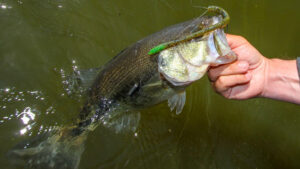 Now, finding a point is easy; finding fish, not always a cinch. Gleason stresses the importance of a thorough and diligent search.

“In the mornings, they’ll be on the sides of the point; they’ll pull up to feed and then slide off,” he said. “At midday, they’re more on the ends, but they’re going to be positioned around whatever the cover is – stumps, big rock, brush piles, standing timber, etc.

“Typically, the best way to know is to side scan the point before you fish it. Even if I see some fish on the side, I’ll still go out to the tip of the point and all the way down the other side, just to make sure I’m not missing some magic honey hole.”

As Gleason observed, you may find scattered pods of fish anywhere along the points, but there’s usually a tightly defined window in which a tightly defined area presents the jackpot opportunity. Settling for the first sign of life isn’t necessarily wrong, but it can prove terribly limiting.

“If you’re fishing the side of the point without scoping out the tip of the point or the other side, you could really be missing a great feeding frenzy,” Gleason said. “So always start on one side, but recon the entire area.

“A lot of your efficiency comes from looking at the points and knowing what’s there before you even make a cast.”