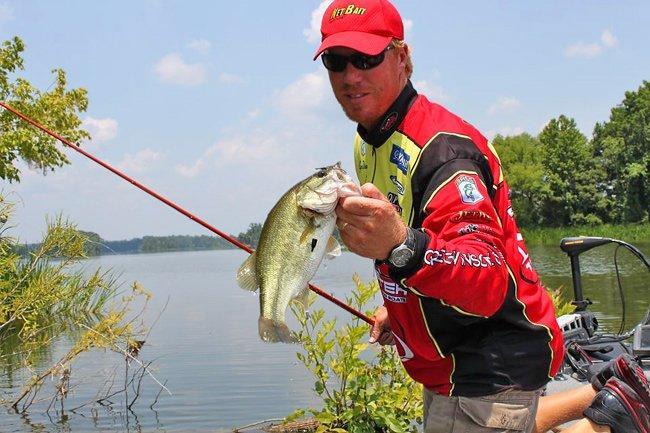 As summer finally fades into fall, bass fishing ramps back up. Bass, shad and other bait fish that have been pushed deep all summer finally resurface and make themselves more readily available. Many anglers speculate why the bass went deep in the first place. Obviously the water warmed. And then there’s that pesky thermocline and turnover that we always hear about. But oxygen levels, algae growth and plankton, all factor into the bass fishing equation.

Bassmaster Elite Series pro Greg Vinson spent countless hours in the classrooms of Auburn University Montgomery studying the science that makes fish do what they do and more importantly six years in the field working for the Alabama Department of Environmental Management.  Majoring in Environmental Science and earning a Bachelor of Science degree in Biology, Vinson offers a unique outlook on what makes fish act so “fishy.”

“There are four things a bass needs in order to survive: oxygen, food, optimal temperature range and habitat.”

Algae and plankton are the two basic building blocks for any aquatic ecosystem. In the southeast, the period from April to October is classified as algae’s growing season. Algae produce oxygen as byproducts through photosynthesis. So wherever algae grow, there will also be a large supply of oxygen.

This level in the water column is known as the thermocline. Below the thermocline, due to lack of light that is needed to produce the algae, there is little to no oxygen. So the window of where to find oxygen, the first criteria for finding bass, has been established above the thermocline.

Plankton feed on the algae which is the most plentiful near the thermocline where it’s growing. A chain reaction then determines where the second criteria for bass, food, can be found.

“Forage fish, like shad, feed on plankton,” Vinson said. “So they are going to go where the plankton is the richest and then your bass are going to follow the shad.”

Now, even though oxygen exists everywhere above the thermocline, the water temperature increases as you near the surface. This temperature change is what drives fish as deep as possible in the hot summer months. The optimal temperature range for bass to be active and feed is between 65 to 75 degrees. So when the surface temps hover around 100 degrees, bass tend to search for that third criterion down deep.

The last step in piecing the puzzle together is finding some form of cover to hold the fish. A bass likes to use rocks, stumps and logs as pick off points in twenty feet of water just like it does in two feet. Locate some form of cover with an optimal temperature range, oxygen and food and you should be knocking on the bass’s door. 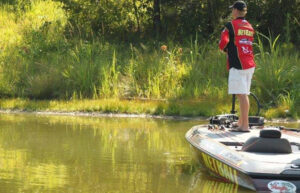 There is no set level, however, at which the thermocline can be found on any given body of water. Several factors come into play, but the most important are water clarity and current. Light penetrates farther in clearer, stable water. This light warms the water and grows the algae establishing the depth of the thermocline. Still water also heats up fast than water that continuously tumbles and mixes like that of a river system. So although the thermocline may be 40 feet deep on a clear impoundment like Lake Lanier it can be only 12 feet deep on the stained Alabama River that same day.

As the summer lingers, the temperature of the water above the thermocline begins to reach a consistent level from top to bottom. Since the deepest water no longer offers a more suitable water temperature some bass start to move shallow and hunt shade and shoreline vegetation. This vegetation creates oxygen just like the algae and the shade can drop water temps as much as 20 degrees.

Knowing this nearly earned Vinson a win at the PAA event on Neely Henry in late August. Catching the largest limit of the tournament on the final day, he made a run at the win and finished a mere 0.2 pounds behind the winner. While many anglers where fishing deep, his 17.92-pound bag came flipping a Netbait B Bug in less than a foot of water.

“I actually started deep at Neely Henry,” he said. “I found some fish offshore but they weren’t the quality I wanted. With it being August, I knew a lot of fish would move back shallow. So I went to the grass and focused on fishing the shady parts of the clumps of the grass.”

In September and October, several things start to happen that inevitably lead to what is known as the turnover. The algae that has been growing all summer begins to cloud the water preventing the light from penetrating down deep. This starts to raise the thermocline up through the water column pulling that algae and oxygen higher and higher.

Simultaneously air temperatures begin to drop resulting in a lower surface water temperature. This cool water becomes denser and therefore heavier. The same simple scientific principle that makes cold air fall on your feet when you open your refrigerator door drives this cooler water below the warmer water that is beneath it. This mixing effect is known as the turnover.

The green and brown tint that the water has during this time is a result of all the algae that was down at or near the thermocline being thrust up near the surface with the warmer water. If you have ever dealt with this as an angler you know that fishing during a turnover can be tough.

“A turnover is going to make fishing tougher for 2 or 3 days because it’s a shock to the system,” Vinson said. “What has been a gradual movement of the thermocline from April to October suddenly flips and their whole world is turned upside down.”

Fish during this two- or three-day period are in “limbo,” and they have to adjust. Within a week or two, however, it becomes apparent that the turnover was actually a good thing. The system stabilizes and fish start to feed and move again.

In late September and early October, mild turnovers will occur in shallow bays and creeks since these are the first areas to cool. It takes only a couple cold nights or thunderstorms to cool the surface temp and flip these shallow areas. Shad make their way back into these bays and creeks from the main river where they have been relating to the thermocline. A complete turnover in the southeast, for example, usually doesn’t occur until late October.

As the water stabilizes after this turnover, the oxygen levels actually drop in the shallows as a result of all the low oxygen water that was introduced during the turnover. This is one of the two reasons that wind is so critical in the fall.

“The wind does two things. It aerates the water along the surface plus it moves the plankton that the shad are feeding on.”

Plankton drifts in the water column along the surface and is positioned primarily by the wind. This explains why, after the wind has been blowing into a bay or on a bank for a couple days, you’ll find big balls of shad grouped up. The wind moves the plankton into these areas. The shad aren’t actually directly positioned by the wind, rather they move to the place with the highest concentration of food as they have all year. Then the bass follow suit.

In order to find active bass any time of year, Oxygen, food, optimal water temperature and habitat must be present. However in the fall one should especially pay attention to the wind since it can heavily influence the location of food and the oxygen levels. As the thermocline rises and temperatures drop prepare for the water to be in flux for a short period of time but know that, once the turnover is over and everything stabilizes, the fish should be shallow and feeding again.