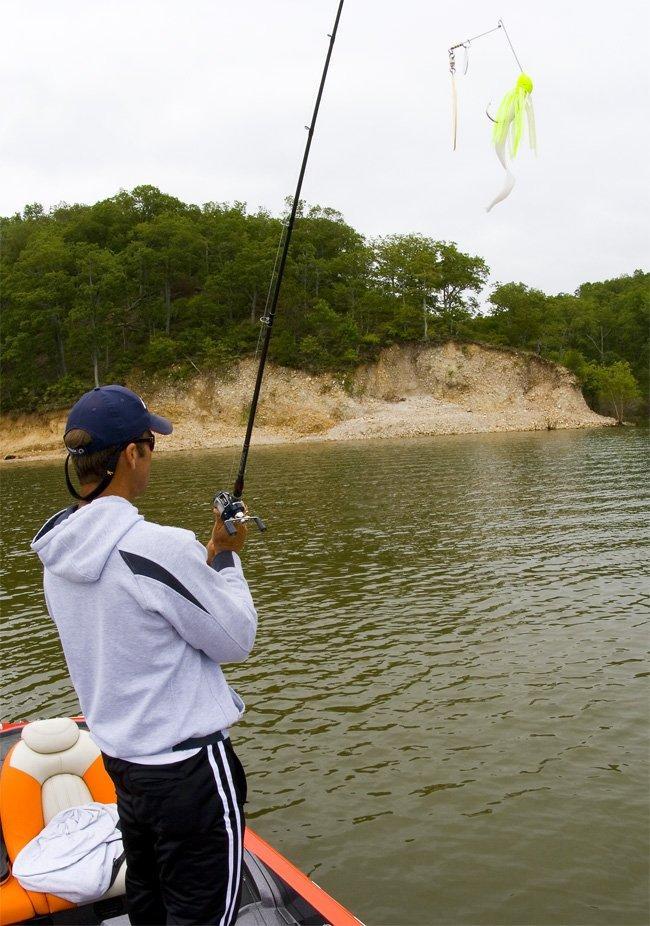 When you think of deep fishing, what’s the first bait that comes to mind? A crankbait? A Carolina rig? A big football jig? Maybe even a jigging spoon. Or what about a drop shot? All these are good choices. But I got a first-hand, eye-witness account of how good a spinnerbait can be for deep bass.

FLW Tour pro Terry Bolton is known as an “offshore fisherman” of course, but he’s also a good shallow water stick. Rightfully so, he does a lot of his damage with a spinnerbait. However, he’s equally as skilled in deep water with a big spinner in his hand.

We spent a day on the lake recently so he could walk us through how, when and where to fish a big spinnerbait for deep bass, and it was really interesting to see how he worked the bait and how effective it was at catching bass. So you’re in for a treat if this is one skill you wanted to improve in your deep-water arsenal. 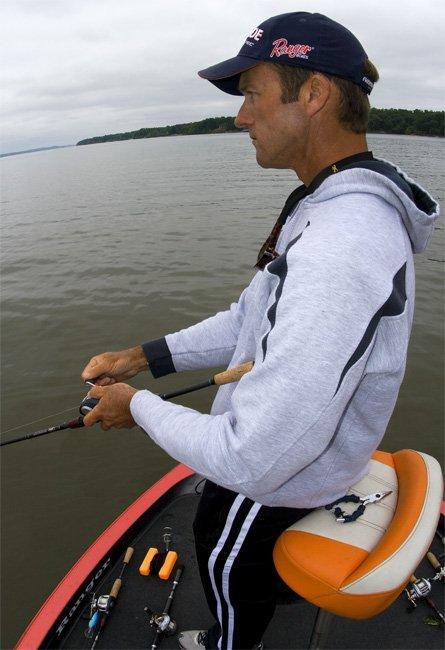 First let’s talk about the right setup for fishing spinnerbaits.  Bolton opts for a 3/4-ounce spinnerbait about 90 percent of the time and the other 10 percent he’ll go a bit heavier with a 1-ounce spinnerbait, usually opting for the heavier bait in severe wind. He’s found through years of trial and error that a No. 5 willow blade is as large as he’ll go for his back blade. He then either pairs it with a No. 2 or No 2 1/2 Colorado blade or a No. 3 or 4 Willow blade on the front. He keeps his colors really simple. He throws a chartreuse and white skirt with a nickel and gold combination of blades.

He prefers a cranking reel, something in the 5:1 gear ratio ballpark. And he pairs that with a 6-foot, 10-inch medium-heavy or heavy-action rod. The reason for the heavier rod is because on a long cast with a bait that is 10-20 feet deep, you’ve got to be able to drive a hook with all that water creating drag on your line. He’ll use anything from a 6-foot, 6-inch rod up to a 7-foot rod, but his preference is 6-foot, 10-inches.

He’ll spool up his reel with 14 to 17 pound monofilament or fluorocarbon. He’s gotten to where he prefers fluorocarbon because he believes he has less stretch to set the hook on a long cast and just a bit more sensitivity than mono. But he’s caught a pile of bass on monofilament as well.

“I’m really looking to throw a spinnerbait on any open water situation offshore,” Bolton said. “I throw it a lot post spawn, when the fish first start grouping up offshore. I will generally be looking for water deeper than 8 feet and also a lot of points right after the spawn.”

As the fish work out from their spawning bays and flats, Bolton starts looking at the first breaks into deeper water. If he can find where a point or a high hard spot intersects with some sort of channel, ditch or other significant depth change, that’s where he’s looking to roll his spinnerbait. 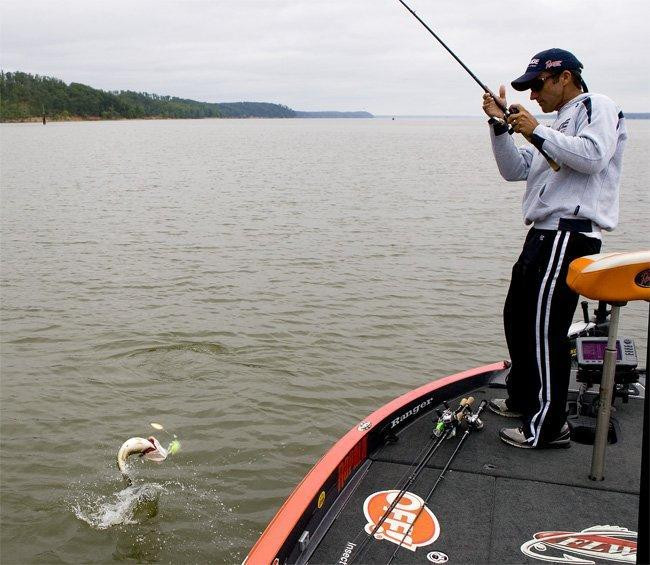 Like most other techniques in fishing, there’s really no mystique to fishing deep spinnerbaits. It’s simply building confidence in the bait that makes it effective for you as an angler. But there are keys to fishing it right that make it a lot more productive.

Bolton starts with a long cast and counts his bait down to the bottom. He wants to know how deep his bait starts on each cast and that helps him keep his bait near the bottom during his retrieve. He usually gives the rod a quick pull or pop to get the blades turning after hitting bottom. Then he just creeps the lure along. If he feels like he’s off the bottom, he pauses and feels his bait back down and then continues reeling.

He keeps his rod low, with the tip pointed at his bait. From there he’ll employ one of two retrieves. He either slow and steadily reels it along the bottom, or he’ll use a lift and drop technique. The key is to feel the bottom much like you do with a crankbait to identify brush, big rocks, grass, and more.

“On the steady retrieve, I tell people that I fish it like it’s December and the bass are real cold,” Bolton said. “That mentality keeps the bait close to the bottom and keeps me from getting too excited, especially when they start biting it.”

The lift and drop is just as it sounds. He’ll raise his rod tip slowly and then let the bait fall back on semi-taut line so that it flutters down but he can still detect a fish “slapping” at it as it falls.

“When they first group up, you sometimes have to lift and pause to get them to react to the spinnerbait,” he said. “And they often will slap at it multiple times so you have to be quick on the draw to hook them. When they are really slapping at it, a crankbait can sometimes be better, because a spinnerbait only has that single hook where a crankbait will stick those slappers in the side of the face with those two big treble hooks.”

With the lift and drop, a longer cast is better. The bait falls more naturally the further from the boat the bait is. As the bait gets more vertical to the boat, it doesn’t have that same natural forward glide that it did at the end of the long cast. That’s one thing to keep in mind on your boat positioning on the spot with a deep spinnerbait.

Each day can be different. One day they may have wanted the lift and drop and the next day they may want it steadily retrieved, so Bolton is always varying his retrieve from day to day on the schools.

“People will have to realize that it’s not a numbers bait as much as it is a big fish bait,” Bolton said. “And they often get hung up on what brand I throw or things like that. The thing I tell people is to find a brand you like and stick with it. Because one brand’s 3/8 ounce is another brand’s 1/2 ounce. Each one is a little different from the next brand. So just pick a brand you like and get good with how it spins and how you fish it.”

It’s an effective means for covering deep water and letting you know if active fish are in the area. And when the fish aren’t active, it can be a great way to trigger them and find them when they move slightly off the spot. The deep spinnerbait is another great tool for the angler for deep bass after the spawn. 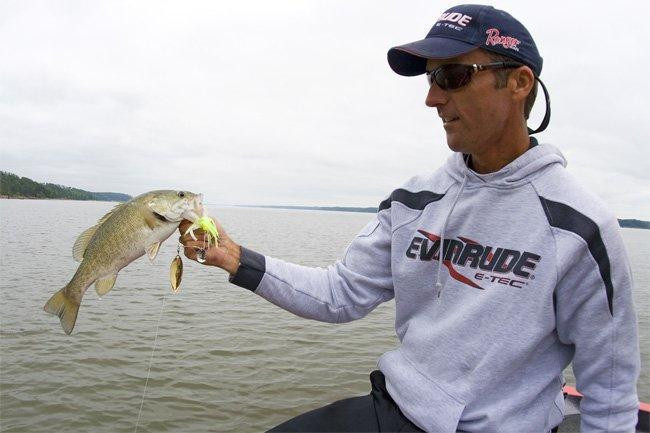