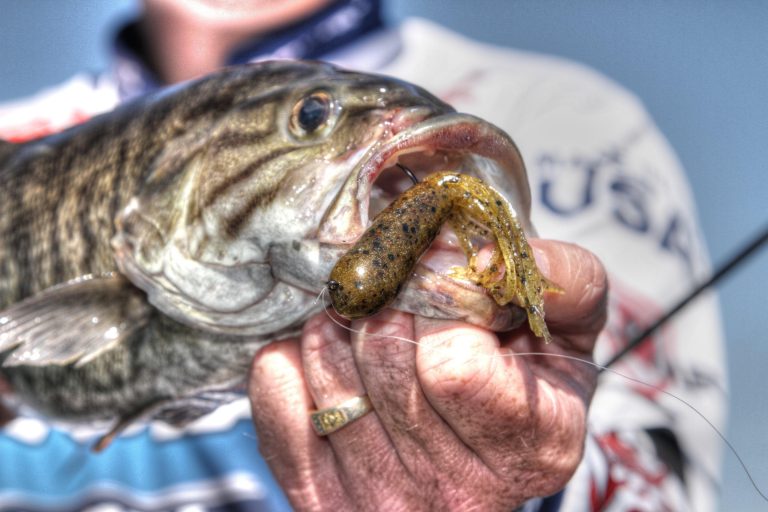 Mark Zona was perplexed. Fishing a tournament on Lake Erie’s north shore “many, many moons ago,” he found himself in the top 3 after day one.

That, of course, was not the problem. What had him scratching his head was a dried-up bite, likely borne of uncharacteristically calm conditions.

Suffice it to say, he was about to crack—perhaps, not in the way you might imagine.

“I had be fishing in 9-15 feet of water, and when I went back the second day, I’ll never forget it, Lake Erie was a sheet of glass. I mean there wasn’t a ripple,” Zona said. “I wasn’t catching them.

“I had four little rock piles that they were on, and they were bigguns. I was catching them (the previous day) on a 5/16-ounce tube, and when I went back through there, I was arrogant enough to think, ‘Well, I must have caught them all yesterday.’ Yeah right; uh … no.”

So, it’s 11 a.m., Zona has one 11-inch keeper in the boat and he’s facing the potential of an epic train wreck.

Then, it happened. A moment of experimentation turns “What if?” into “That’s it!” 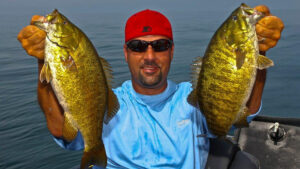 Zona’s solution was the technique known as “cracking.” Also called “snapping,” these terms aptly describe the action of sharply jerking a heavy lead-head tube and allowing the bait to drop back and “crack” into the rocks or any other solid structure you’re fishing.

“The whole system of cracking a tube is rate of fall and rate of snap,” Zona explained.

Diagonal Delivery: According to Zona, proper cracking starts with that long bomb cast. Create some distance and work the tube on an angle.

Keep It Loose: To minimize forward movement, while also allowing the bait to fall back to the target site, slack is a good thing for those of cracking intent. Try this on a tight line and you’ll yank the tube out of the strike zone. Slack line jerking; that’s the name of the game.

“If you watch a goby, they’ll make that dead dart and stop, then repeat. Those Great Lakes fish are so conditioned to seeing a tube drug on the bottom, but this gives them a different look.

“Call it a reaction bite on a traditionally slow-moving bait.”

Western pro Cody Meyer, who’s keen on cracking for smallies and spotted bass in deep California reservoirs, uses this technique to do the otherwise undoable.

“A lot of times, the spotted bass and smallmouth will be deep where most people are dragging a jig,” he said. “When you’re cracking a tube, you’ll actually draw a reaction strike.

“If you’re fishing in 40 feet, and you can’t get a crankbait down there, you can fish a Carolina rig or a jig. But if you start cracking that tube, you’re drawing attention from fish that haven’t seen it.”

The Right Tackle: Zona likes a custom 7-foot, 5-inch medium spinning rod with an oversized reel holding 8-pound fluorocarbon. A beefy outfit with just the right amount of tip allows both the distance and action necessary for the cracking technique.

“You’re double-handle throwing that tube as far as you can,” he said. “The other thing is that if you have too stiff of a rod, you’re losing that bounce—that rubber band effect. With too soft of a rod, if I get a 4- or 5-pound smallmouth at the end of a long cast, and he’s going crazy, I have no leverage on him.

“Whether I’m cracking a tube shallow or deep, I only feel 20 percent of the bites I get on it – the rest of the time, the rod just loads.”

Fluorocarbon is important, because it absorbs much of this technique’s inherent snappiness. Braid, by comparison, is too responsive and imparts too much action on the tube – not to mention the risk of opening a hook.

“What we’ve all read, ever since I was a kid is that when it goes dead flat calm is to go lighter, go finesse,” he said. “But when you’re on St. Clair or on Erie, when you go lighter, you’ve gone lighter with everybody else that’s out there.”

Of course, some of fishing’s greatest moments come when we buck the trends, break from the norms and show the fish something different. When others are inclined to ease off the gas, cracking shouts “pedal-to-the-metal, baby!”

“Cracking a tube is so much better when it’s calm because those are the days when everybody says you have to downscale and go to a 3/16- or a 1/8-ounce tube. That’s when it’s at its best.”

Sunlight also factors here. The higher the sun angle and the clearer the day’s conditions, the more baitfish drop closer to the bottom. Midday is cracking primetime.

“Most people only think about smallmouth, but that’s probably why it works so well for largemouth. They never see it,” Meyer said.

Zona agrees, and points out that for inland largemouth – as well as smallies – he won’t hesitate to use the cracking technique in vegetation. The attention-grabbing objective remains the same, only instead of doing so through impact, he’s trying to get the fish’s attention through a ruse of faux struggle.

“What I’m trying to do is bomb a 1/2- or 3/8-ounce tube, and I want it to purposely grab grass,” Zona said. “When you start bouncing your line, I know it’s hung in that grass, but I’m not just trying to rip it out.

“What ends up happening is you draw everything from around that area to come and see what’s going on. When it comes free, that’s when they’ll bite it.”

Elsewhere, Zona found the fish receptive to this technique even in highland reservoirs like Table Rock, where cracking tubes on river flats near the dam yielded great success this spring. 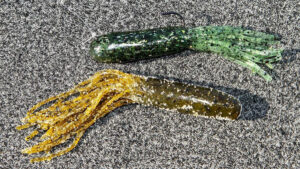 Smooth Operator: Jordan Lee offers this suggestion: Moisten the jighead with saliva prior to insertion in the tube. This allows for a smoother motion with less chance of tearing the tube prior to the point at which the eye penetrates.

Open Wide: For optimal hook sets, Meyer cuts a slit in one side of his tube to allow maximum hook exposure on the bite.

Hold Fast: The tube hookset is simply a reel and load deal for Zona. But he makes sure he never lets up, even for a second.

“I’ll rough talk ‘em when they come up to jump the first time,” he said. “I’ll do everything in my power to keep the fish down. A lot of times, the more pressure you put on that rod, the less he’ll want to come up.” 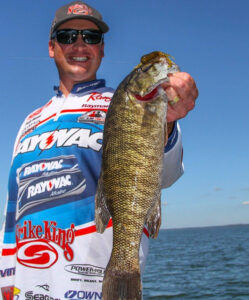