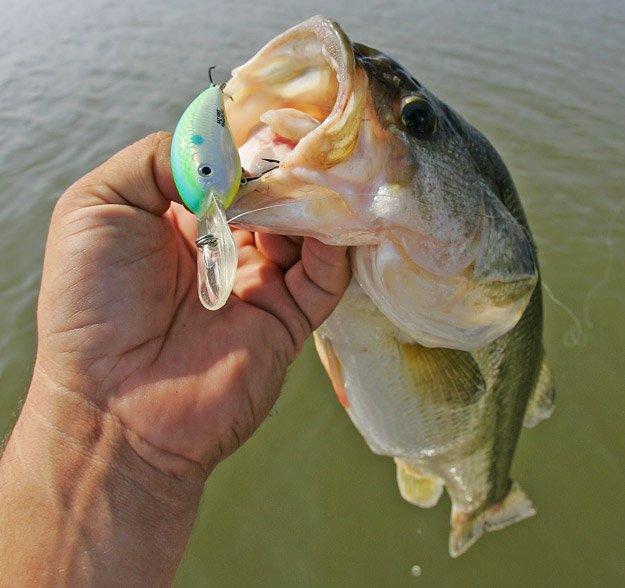 Some tools just work better than others. That is they are more suited for the task at hand given different scenarios. But that also means there are times when they are not the best tool in the box for the job. A crankbait is definitely one of those tools in fishing. When the fish are in the right position and mood, there isn’t a better bait in your tackle box to catch a big bass. Problem is the window of opportunity is not as large as most anglers think.

Many pro anglers have made a name for themselves throwing big crankbaits “out.” By out they mean out away from the bank. When the bass move to offshore structure, they have capitalized on schools being positioned right, with the right attitude and the right conditions to maximize the crankbait’s effectiveness. But for two anglers, the results have been crazy with crankbaits recently.

Pro angler and guide Curt McGuire of Paris, Tenn., recently won the FLW American Fishing Series event on Kentucky Lake in May. McGuire realized that enough big fish had moved out away from the spawning banks and were easy pickings on the ledges on Kentucky Lake. But he figured out early that the better bite was on a big crankbait.

Likewise Bassmaster Elite Series pro Russ Lane of Prattville, Ala., has done some major damage with a big plug. “I’ve probably cashed 75-80 percent of checks throwing a big crankbait offshore,” Lane said. “I don’t need a bunch of bites, I just need five of the right bites and a big crankbait gets that for me.” 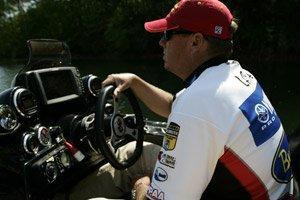 Lane has had two monster days in Tennessee River events on the Elite Series this year. At Guntersville he had a 26-pound limit the final day, and at Kentucky Lake he did the same on the second day of competition due in large part to the power of a big crankbait.

Both anglers are quick to note that no one crankbait does everything. You need a variety of colors and sizes with different actions because sometimes the fish react to one swimming motion better than another on any given day.

“I don’t think there is one bait and you put your finger on it and say ‘this is THE CRANKBAIT,’” Lane said. “Each one is a tool and you use them all for different situations. When I’m working those big schools like on the Tennessee River lakes, I have five totally different crankbaits on deck.”

“Sometimes when I catching fish on a crankbait and they only have one hook or I’m getting that sensation that something just took the water off my crankbait (it quits swimming for a second), then I know I need to make a change,” McGuire said. “I’ll change the color or even the style of crankbait to see if they will get that bait a little better.

The two anglers disagree though on line size and how they want the baits to run, yet both have had success doing it each way. McGuire goes light for his crankbaits all the time. 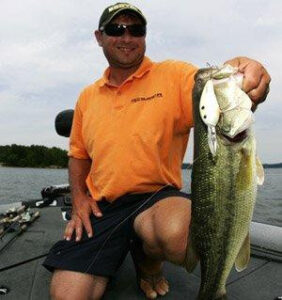 “I use 8-pound monofilament exclusively for my cranking on the Tennessee River,” he said. “I’ve tried fluorocarbon and other sizes of mono, but the fluoro can be hard to manage in 8-pound test. Besides, I want a little extra stretch with the 8-pound mono. I reach a few more fish that other guys might miss, and I’ve never had an issue landing fish. I might lose a few but everyone does. But I feel like I’m getting more bites too.”

Lane lets the situation dictate his line sizes. “I want my crankbait to get down and barely touch the bottom,” he said. “I don’t want it plowing. So I use different line sizes to make my crankbaits run how I want them to. If I know I’m fishing 15 feet on top then I might use 12-pound fluorocarbon with a Bomber Fat Free Shad because I know that will just get down and barely touch.”

McGuire has a totally opposite philosophy on how his crankbaits run. Rather than just ticking bottom, he wants to cast the bait as far as humanly possible on every cast. Then he wants the bait plowing and stirring up the bottom. But he definitely has a method to the madness of his cranking. He’s not concerned with feeling every rock but definitely wants to feel when his crankbait starts digging into cleaner bottom. That’s the key to him.

“On most ledges, humps and points, I will throw the bait across them so that I can bring it up one side and down the other,” McGuire said. “What happens is the bait is stirring up dirt and silt on the bottom and then it comes flying into that nice clean bottom where the fish are sitting and it surprises them. I think they see something kicking up all this debris and then all the sudden a crankbait appears right in front of them. I crank it fast so they don’t get a good look at it and just react.”

Both anglers like a rod with a good parabolic bend but enough backbone that the rod doesn’t seem flimsy. Lane would like to use glass rods to fight the fish, but he gets better feedback from his bait and the bite on a graphite rod. For that reason, he uses American Rodsmiths David Fritts graphite rods. McGuire uses some old Pfleuger rods that aren’t even on the market anymore, but the rods have a good even bend and enough backbone to pull the hooks snug into the mouth of a big bass.

Both anglers will move the bait fast while fishing but they also will change it up with a stop and go. Lane adds a twist.

“I like to stop the bait and then point my rod back to the bait so that it has enough slack to back up,” Lane said. “At times I think the bass is tracking the bait the whole way, and he never hits it because the bait never did something different or changed directions. I’ve seen where that can really trigger a school and make them more aggressively feed.”

Another tip both offered about fishing fast is to keep moving. Lane will often work down a ledge looking for active bass only casting every 10 to 20 yards on the ledge. McGuire will work all the way around an area like a point, a hump or ledge until he finds the angle that the bass want the bait to run. He finds that more often than not there is one cast that you can keep repeating to trigger consistent strikes. The key is not to come up to one spot and make a few casts and give up on it. Work around, move around and keep moving.

McGuire keeps his philosophy simple on cranking out. “I throw a big crankbait to get big bites,” he said. “If you catch 10 bass off a ledge on a big crankbait and 10 on a jig, your 10 on a crankbait are going to outweigh the jig fish every time. At least here on the Tennessee River that’s the case.” 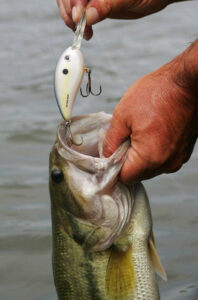 So what baits do the anglers reach for when they are fishing out away from the bank? McGuire almost always starts with a Bomber Fat Free Shad. That’s one of the choices that Lane also starts with a good portion of the time. Both will throw other crankbaits as the situations dictate and keep several different kinds tied on. Several other options that both anglers liked were Norman DD22s, Strike King Series 6. Other good choices are the Rapala DT baits for quiet approach and tight wiggle and Lane also really likes the new Spro Little John DD. That crankbait is finding its way into a lot more tackle boxes because it’s a fish catcher.

As for colors they both like the Citrus colors from Bomber, Chartreuse colors with either Blue or Brown/Green backs and Natural shad colors including the Sexy Shad from Strike King and variations of it. The Chartreuses get the nod in the real early spring when there is more stain in the water and the shad have some more color to them. But as the summer progresses and the rain lessens and the waters clear, those natural shad colors get more productive.

One final note on location, both anglers said the ledges they crank are relative to the part of the lake they are in. Every lake has an upper, lower and middle section. If the bass are biting on top of ledges in 8-12 feet of water in the upper end of the lake then they will run that upper third of the fishery looking for similar depths and spots. But when they move to the middle or lower ends of the lakes that could mean the bass are now 14-16 feet on top or 18-20 feet on top in the lower end. Being aware that because you caught bass in 12 feet in the upper end, doesn’t mean that translates exactly to the lower end. It’s another great tip for anglers to keep in mind on their lakes.

Both have the same idea but approach it a little differently. Both anglers have proven each system works when it counts and what anglers should learn from this is they need to fish crankbaits and adapt them to fit their own style. What works for one guy might need to be tweaked to work for you. The key is to get out there, cover water and stick with it. Late spring and early summer is the prime window for this application when the schools are first grouping up offshore and aren’t conditioned yet to crankbaits.