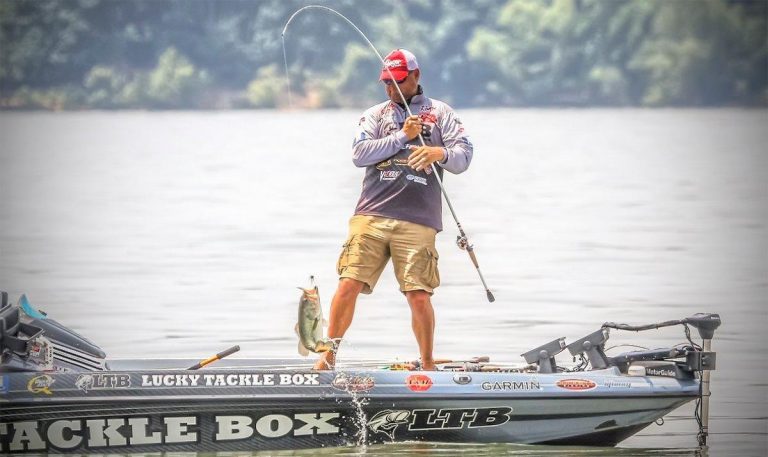 Aside from the ones in another angler’s livewell, most agree that some of the toughest bass to catch are suspenders. This time of year, anglers fishing offshore occasionally face the frustration of bass floating off the structure and often sliding out to adjacent deeper water and holding in general lethargy.

Suffice it to say that catching your fish in that perplexing suspension mode, requires a shift in strategies. Indeed, you’ll do well to replace those traditional ledge tactics with a few apropos targeting moves designed to tempt a few more bites from a scattered school.

Take away that current, and you eliminate the fish’s primary reason to hug the ledge.

“When there’s no current, the shad leave,” said FLW Tour pro Jason Lambert. “Once the shad stop sitting in the places the bass need them to, the bass just kind of hang out.

“It’s strange, you can see a hundred fish in a school one day and the next day you can’t see a fish anywhere around that spot. And then two hours later, you can roll back over that same place and those hundred are back again. I think they just suspend out there to rest for a little bit.”

Summer skies typically start seeing cloud cover developing at least by early afternoon, but periods of intense sunlight can also push the fish off a ledge—particularly in the absence of any wind to break up the surface.

FLW Tour pro Randy Haynes agrees that it’s the scattering tendency that makes suspended fish so difficult to engage. Whereas locating a school on the ledge provides clear sonar returns, suspenders typically appear as one or two marks.

“When they’re scattered over a larger area, they’re harder to graph them,” Haynes said. “You might ask yourself ‘Is this bass, or is it bait?’

“It’s really just having confidence in your units. You might see two or three here, one over here, one over there and three or four over there. They’re just harder to recognize because they’re not grouped up. It’s just the size of the fish.”

“When they suspend off the side, they tend to be less active and harder to catch,” Hawk said. “I’d rather see them suspended close to the drop before fishing for them.” 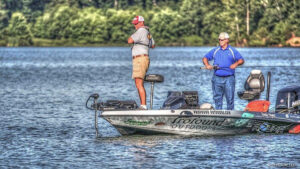 When fish simply float up from the ledge and suspend near their feeding grounds, Hawk selects his presentation based on position in the water column.

For fish holding over deeper water, Haynes likes a medium swimbait like the 5-inch Zoom Swimmer on a 1/2- to 3/4-ounce lead head.

Lambert also likes the swimbait technique, but when the fish are finicky, he’ll rig a Castaic Jerky J on a 1-ounce scrounger-type head. The straight-tail, oversized soft jerkbait relies on the lipped jighead’s wobble for its motion, but the overall look is less aggressive than a traditional paddle-tail swimbait.

If suspending fish won’t bite the swimbait, Haynes will show them the big 10-inch Zoom Ol’ Monster worm, Texas rigged on a 4/0 round-bend hook with a 3/8-ounce weight.

“The worm falls through the middle of them, and one usually gets it on the fall,” Haynes said. “If not, you can yo-yo it, or work it up through them like a spoon. There’s something about that ribbon-tail plastic worm they really like.”

For a different look, he’ll alternate with a Zoom Trick Worm on a 3/16-ounce shaky head.

Lambert’s favorite tool for tempting suspenders is a drop shot comprising a 3/8-ounce weight and V&M Trickster worm nose-hooked on a No. 1 split shot/dropshot hook. The key is a vertical presentation.

“I video game them,” he said. “I’m not dropping until I see them.

“I put it in their face and leave it there. I don’t give it much action, just a gentle twitch. I’m not violently moving it, just enough to make the worm wiggle.”

IMPORTANCE OF GRAPHS AND BOAT POSITION

With his scrounger presentation, Lambert always sits deep, casts shallow and brings his bait off the edge. This is the most effective angle to entice fish that are ever watchful for the random shad passing along the edge of the drop.

“I never sit up top and throw out deep; it’s so much more aggravating fishing up a ledge than down a ledge because you hang up so much,” Lambert said.

Once his bait reaches the deeper water, Lambert wants to make sure each of his retrieves remain in front of the fish as long as possible. They’re not likely to chase anything during this sluggish time, so you gotta make it easy on them.

“That’s why good electronics and understanding what you see down and in front of you, like with the Garmin Panoptix are so important,” he said. “You can track the depth of your bait as it comes back to the boat and adjust as needed.

“When fishing for scattered suspending bass, you want any advantage that increases your percentage of getting your bait through those fish. You have to hit those suspended fish in the head with it to get those needed reaction bites.”