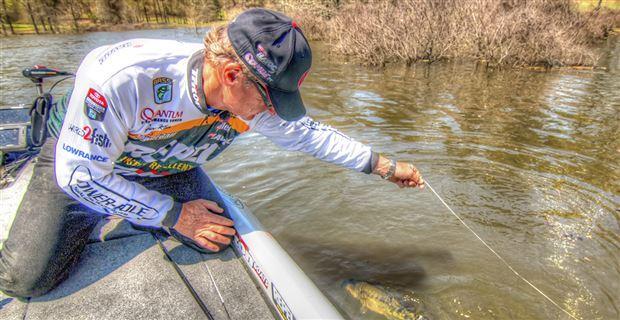 An avid hunter and long-range marksman, Bassmaster Elite Series pro Gary Klein’s all about making that perfect shot — a principle that also guides his shallow water game. During summer’s swelter, targeted bait presentations are critical and, for his money, nothing more quickly defines this than flipping and pitching.

Particularly relevant to warm season pursuits in lakes lacking deep, offshore structure, or in scenarios where some of the fish prefer the shade of shallow cover; flipping offers a meticulous method for “sighting in” those woody, leafy, vine-strewn targets.

“The important thing about the flipping technique is that it allows me to develop a pattern within a pattern,” Klein said. “I don’t like to come into an area and see everything. I try to isolate the targets.”

“I don’t want to come into an area and see everything,” he said. “In a flooded (scenario) like Texoma, you could go into a bay and 3 hours later you’re still in there. You try to see it all and fish it all.

“Every hour you’re on the water and every bite you get should make you more efficient at hitting the key stretches. On the third day at Texoma, it was so easy. Those fish in the area I was fishing were so predictable, I could tell you ‘I’m going to get bit right there, over there and over there,’ and I wouldn’t waste my time anywhere else.”

Klein said flipping and pitching allows him to take a representative sampling of the area, probe it for specifics and apply that knowledge to the larger layout.

“Sometimes the obvious is not the obvious, but flipping or pitching allows you to determine that pattern within a pattern and be dead on accurate.” 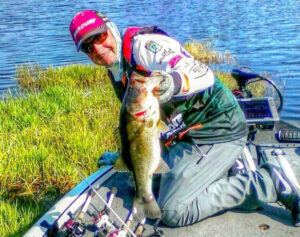 Noting the differences between flipping (reel engaged, line pulled to the side and released on the forward swing) and pitching (reel disengaged, bait lightly gripped to load the rod tip in underhand form), Klein said he seamlessly transitions between the two while working a stretch of cover with various target distances.

Flipping enables him to precisely pick apart particular pieces of cover, while pitching extends his distance when he needs to reach back into a little pocket or gap in the vegetation.

With each new spot, Klein wants to determine if the fish are living in the cover, or simply using it. Sky conditions often influence this, as fish roam more under cloudy skies, while strong sunlight pins them tighter to cover. That being said, Klein’s a fan of tempting fish from their fortress.

“A lot of times, this will dictate how I present the bait,” he said. “If I’m fishing really thick stuff, my first pitch isn’t going to be way down in the middle of it because chances are you may lose that fish.

“I try to position the boat in such a way that I can get the fish to come from the cover to eat the bait so I have a better chance of landing the fish. If that doesn’t work, then I’ll go right into the thick stuff and get him.”

Essential to Klein’s flipping game is an 8-foot, heavy-action Duckett Fishing flipping rod, which not only allows him the reach to send his bait into the target zone, but also equips him to control and direct a hooked bass. While he trusts braided line to cut through vegetation, Klein likes 25-pound fluorocarbon around wood to prevent the line pinch common to super lines. 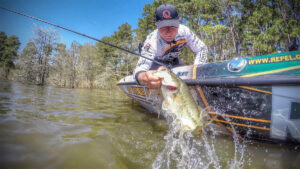 CHOOSE THE RIGHT FORM FOR SUMMER

When it comes to picking the right flipping rig, Klein’s a big fan of listening to the fish. As he puts it, “One bite will rat on the rest of them.”

That said, situational awareness guides his basic bait selections. For example, the lanky profile of a 10-inch Berkley Power Worm with an 1/8-ounce sinker makes an enticing presentation as if slithers and swims through loose cover such as gaps in lily pads or the exterior of a laydown. However, that worm’s going to have a tough time navigating its way through thicker brush.

“If I’m trying to penetrate into the tree, buck brush or whatever the cover is, then the tail of a plastic bait can make for a frustrating attempt to get your bait way back up in there because the tail is always catching and changing directions,” Klein said.

To minimize frustrations and maximize efficiency, Klein flips with streamlined baits like the 4-inch Berkley Pit Boss. A substantial body large enough to accommodate a big hook sports tentacles that offer enticing wiggle without excess length to catch on vegetation.

If he thinks the fish need a little more convincing, Klein will dress up his Texas rig with a punch ring and a bristly skirt, which creates more of a jig look. Rattle collars further enhance the ruse with enticing sounds on the descent.

Past that, Klein knows that the most important factor in triggering strikes is fall rate. The heavier the bait, the more it triggers a reaction bite. General rule of thumb for summer is a faster fall to trigger complacent fish.

Color Code: Opaque colors (black, brown, purples, blues) are his preference in off-color water, while clean conditions warrant more translucent baits (watermelon, pumpkins, etc.). Klein’s admittedly fanatical about accent colors and not only the common chartreuse and orange — his dye kit contains over a dozen colors with blues, black, red, yellow and even purple. He’d rather rely on customized accents based on hourly observations than baits with color flakes, of which he believes fish have seen too often.

Keep it Down: Pointing to the bull-in-a-China-shop mistake that would-be flippers often make, Klein stresses the value of stealthily easing into his flipping zone with a constant low trolling motor power. The fish can be remarkably tolerant to consistent sound and approach pressure. It’s the fluctuations that flip their spooky switch.

“When it comes to 100 percent accuracy for shallow targets and having all the factors in favor of the angler, there’s nothing better than flipping and pitching in the heat of the summer.”