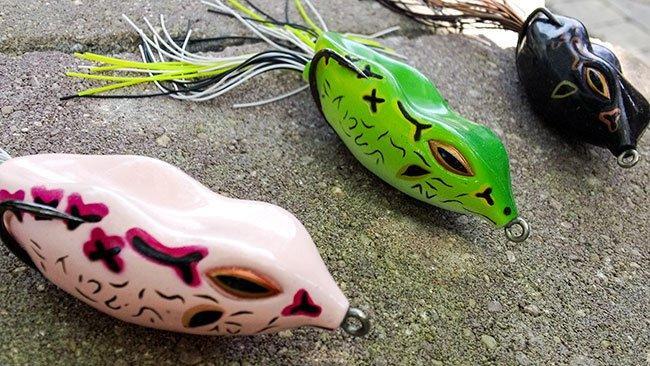 Natural lakes may take hundreds, or even thousands, of years to advance to the next older stage of lake classification. But when fishing small lakes like strip mine lakes, age, measured in terms of fertility and lake features, often comes more rapidly, particularly when man or nature accelerates the aging process.

I made a first-time visit to a fertile strip pit near Peoria last week with Todd Kent, head chef at Jim’s Downtown Steakhouse in Peoria and a frequent contributor to Heartland Outdoors magazine small lakes.

We couldn’t capture much history of the lake at the time, but it was a beauty””a clear, shimmering water teeming with life.

Owner Ralph Sedgwick’s home overlooked the two segments of the lake. Each had deep basins separated by fairly large flats and sunken islands.

While a swim jig and swimbait produced as did a Jackall Flick Shake, the frog was the ticket to fishing this vegetation covered strip pit.

Moss rimmed most of the shoreline. Vegetation,  much of it Eurasian milfoil, grew from the shallows to depths of 18 feet or more. The vegetation helped to maintain the lake’s crystal clarity. Even without electronics, we could read the growth pattern of much of the lake’s vegetation, including plants scattered along drop offs where I took a number of fish on a dropshot rig and a 9-inch Upton’s Custom worm. Color: the Pehanich Special, a motor-oil worm with a chartreuse tail named after yours truly.

The swimbait, dropshot and Flick Shake enabled us to cover the edges and dropoffs. They were high percentage areas, to be sure, but by no means did they hold all the lake’s fish-holding potential.

Kent opted to work over these areas with a hollow-bodied frog. It was his first time out with the Nories NF 60, and his first choice was the natural frog color called Male Green.

This was great walking water for our frogs. Bass had long, long yards of thick milfoil and other aquatic vegetation to hide in. These grass stretches were far too thick to work through. But we had plenty of room to work the frogs over the tops of the vast beds of vegetation that reached to within 1-1/2-feet to a half-foot of the surface.

Kent concentrated immediately on the holes – dark shadows we could easily identify even at long distance due to the clarity of the water. Some were only a foot or two in diameter, a few as large as five or six feet. These were high percentage areas where a “walking frog” had time to mesmerize a bass sitting in ambush on the edge of the hole.

He stuck and boated fish on the next two strikes as well. That was enough for me. The swim jig/swimbait bite was still going strong, but the frog worked effectively where the swim jig dared not tread!

I started out “chugging” my frog tight to the moss-rimmed shoreline and over the shallow vegetation. Several casts to such areas drew no attention from bass. Meanwhile, Todd continued to work the vegetation on the mid-depth flats, concentrating particularly on the holes, and over the tapering vegetation around six- to 12 feet before the breaks plummeted to 20- and 30-foot-plus depths.

We doubled up quickly on the taper, the bass hitting our baits almost simultaneously.

From our photos, you can see that Strip Pit No. 2, a.k.a. “Home Lake,” featured a ring of moss in many areas – a characteristic of many prototypical froggin’ lakes. But we caught nary a bass from the moss. Some came on the transition from the aquatic plants on the flat to the scattered clumps of vegetation on the taper. But our best catches came from the “black holes” on the extended beds of milfoil on the flats and humps.

You’ll note in the angling literature, more and more discussion about “walking” hollow-body frogs and popping-style frogs in open water. Why? As more anglers improve their walking technique, they are discovering its advantages at times over other topwater lures. With practice, an angler can learn to keep a walking frog and its seductive profile within the bass’s strike zone for a long and all-too-tempting time!

“Interesting! Almost all our fish today had both hooks in the roof of the mouth,” Kent noted as we paused for photos later in the day. Our hook-up ratio with the NF 60 was remarkable.

I tied on a bubble gum Nories NF 60 in mid-afternoon – more as a novelty and to goad Kent, who enjoys shocking central Illinois anglers with his penchant for, and frequent success with, bubble gum pink worms, trailers, and bladed jigs. I knew he would covet the bait for its sheer “shock” value, whether it caught fish or not.

Surprise! The pink may have been the best producer of all! During one stretch, I landed fish on the bubble gum-colored NF 60 on 4 out of 5 casts.

Might it happen again? I’m confident it will, but I first will have to find a replacement.

If you guessed that I’m a softy, you’re right. I gave the bait to Kent. Seeing that pink frog turn the chef’s ruddy complexion to “envy green” was too much for my tender heart to take!

Take care of her, Chef Todd. She’s a beauty. The lake and the frog. 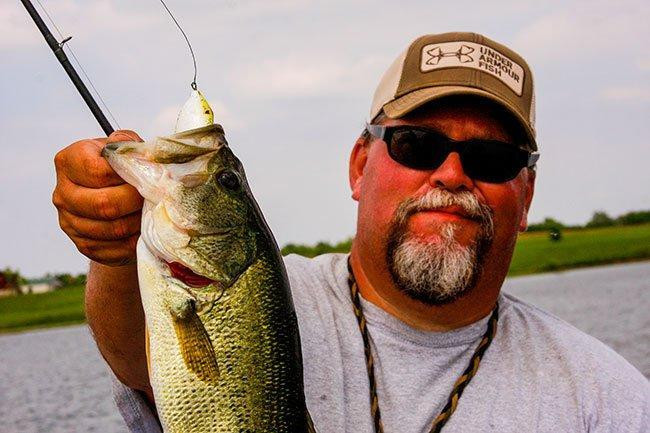