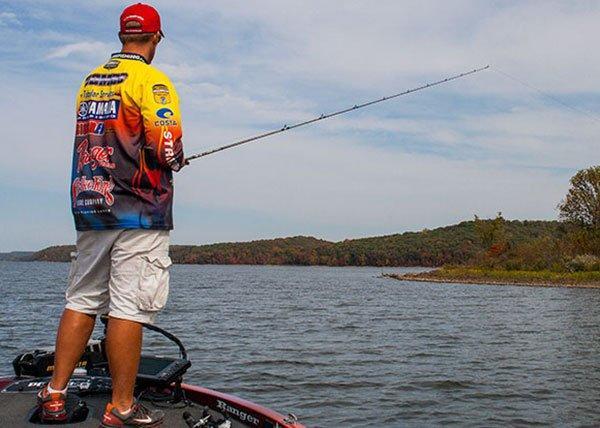 Summertime is upon us and you know what that means””big bass worms. Although this technique has become synonymous with big, deep water bass over the years, it’s quickly becoming a forgotten art. With today’s market getting flooded with new soft plastic shapes, one of the most effective big bass baits is being pushed to the backburner.

Strike King pro Keith Combs is a big-time believer in big worms throughout the summer. Whether he’s on the road fishing professional tournaments or guiding on Texas fisheries, they’re an integral part of his hot weather arsenal. While many anglers slowly drag big worms, Combs fishes them quickly to draw aggressive reaction strikes.

The allure of a big worm

When Combs is throwing a big worm during the summer, you can be sure of one thing””he’s headhunting. While you can certainly use other bottom contact presentations and catch more fish, he believes a big worm targets the biggest bass in a given area.

“A Strike King Rage Tail ReCon Worm is a flat-out big fish catcher because of its ribbed body and aggressive Rage Tail design,” said Combs, 2013 Rigid Industries Falcon Slam Champion. “I can fish a deep brush pile with a crankbait or a football jig and catch a ton of fish, but the true giants will show themselves when you break out the big worm. People don’t throw them much anymore, but the bass still devour them.”

In addition to appealing to large, wary bass, a big worm is also very resistant to hang-ups, making it an even better choice for fishing deep cover and structure. An untimely snag when targeting deep bass can often shut down feeding activity in a matter of seconds.

“There’s nothing worse than getting hung up on one of your best deep summer spots,” Combs said. “If you throw a football jig or a Carolina rig into a deep brush pile, you’re going to catch a bunch of limbs. The slender profile of a big worm comes through cover very well and helps you fish more efficiently.”

Fish it quickly and cast often

Summertime bass fishing is often about finding the “right” group of bass. It’s not uncommon to catch countless 2-pounders all day before you stumble upon a group of 5-pound class fish. For this reason, Combs wants to cover as much water as possible and quickly fishing a big worm allows him to do just that

“Summertime is all about moving and casting as many times as you can,” Combs said. “When I’m searching for key areas with rock, brush or shell beds, I fish a big worm very quickly with a lot of aggressive hops. If I run across some cover that feels really nice, that’s when I’ll slow down and fish it like a traditional worm.”

So if he wants to cover water, why doesn’t he just use a crankbait? Combs certainly utilizes his Strike King Pro Model 6XD Crankbait when searching for fish, but a big worm gives him additional options. Whether he’s targeting active or inactive fish, he’s always got something up his sleeve.

“A big worm is great for active bass because it gives you such an awesome hookup ratio””probably around 98 percent when you use a 4/0 Owner Offset Shank Wide Gap Worm Hook and a 1/2-ounce Strike King Tungsten Weight,” Combs said. “If you’re stuck with inactive fish, you’ve got several things going for you. On part of your cast you can soak it in high-percentage areas and you can also hop it quickly to irritate a big one into biting.”

When Combs fishes a big worm, you’ll notice an unusual amount of rod movement. This isn’t an accident, however””there is an exact method behind his madness. He knows what trips the trigger of a big, summer bass.

“When my worm hits the bottom after my cast, I start out by putting my rod at 9 o’clock,” Combs said. “When I hop it, I want my rod to stop at 12 o’clock and, most importantly, I keep it at 12 o’clock so the worm will pendulum toward the boat which allows me to cover a lot of water. If you let your rod tip fall, the big worm won’t move quickly enough.”

By moving his rod from the 9 o’clock to the 12 o’clock position, Combs envisions his worm jumping approximately 3 to 4 feet off the bottom. As he lets the bait pendulum on the fall, he estimates up to 10 feet of horizontal movement.

For a better hookup ratio, understand how a big bass eats a worm

Many of us don’t ever consider what really happens when a big bass strikes our soft plastics””especially big worms. Combs has spent a lot of time studying the feeding behavior of bass and has adapted his hookset accordingly.

“When you watch a big bass eat a worm, they always grab about midway up the worm first, which is the initial “˜thump’ you feel,” Combs said. “This first attempt is almost always below your hook. After about 1 second, they’ll chomp on it usually 2 or 3 times before they swim off and eat the whole thing. That’s why you usually feel a hard thump to begin with, followed by a few subsequent, softer bumps.”

After this discovery, Combs has become more patient with his big worm hooksets. After he feels the first, hard thump, he waits 3 full seconds before executing a big, sweeping hookset with his 7-foot, 6-inch heavy-action Power Tackle Paragon Casting Rod. Don’t lose track of your reel handle during your hookset, because you’ll need it with a big worm.

“You always want to reel through the hookset,” Combs said. “More often than not, they’ll bite at the end of a long cast, so you need to keep tension and gain ground on them quickly. I use a 7.3:1 Shimano Chronarch so I can easily eat up a lot of line.”

Don’t get too caught up with your color selection

Some soft plastic techniques, such as drop shot fishing, tend to be very visually oriented. While he does pay some attention to his color choice, Combs believes the water displacement of the Strike King Rage Tail ReCon Worm is most important.

“Basically, you only need 3 colors,” Combs said. “Plum is a great choice in stained water and cloudy conditions, especially on Texas and TVA fisheries. Green Pumpkin Sapphire is outstanding in clearer water and sunny skies, and Red Shad is an excellent all-around color for most situations.”

While everyone else is throwing football jigs and Carolina rigs this summer, consider throwing a big bass worm. If you hop it quickly, cover a lot of water and understand the feeding behavior of bass, you’ll have a great time and catch a lot of big fish.