Power generation lakes are notorious for tricky fishing, but a few key tips can maximize your success

Often times, we tend to view our local fisheries as just thatâ€”fisheries. Aside from the recreational activities our lakes provide, we fail to realize that many communities rely on their local lakes for power. These power generation lakes present anglers with several challengesâ€”from fluctuating water levels to confusing generation schedulesâ€”that can be difficult to figure out. Once the puzzle is solved, however, these fisheries can provide some outstanding fishing for both novice and veteran anglers.

Chevy pro Jay Yelas has had great success on power generation lakes throughout his career, including a 2002 Bassmaster Classic win on Lay Lake. Yelas recently shared some great tips for fishing fluctuating water levels that are sure to increase your success on these fisheries.

I live on Georgia’s Lake Sinclair, which was built to be a power generation lake. There have been many instances when I’ve been waiting for blast-off the morning of a tournament and noticed all of my favorite shallow structure sitting high-and-dry. To combat frustrating situations like this, Yelas urges the importance of learning the lake’s generation schedules before you hit the water.

“The majority of dams have online generation schedules or provide a phone number you can call that will give you generation forecasts,” Yelas said. “It is imperative that you always know what the water levels are going to do in order to plan your fishing day around it. While the forecasts aren’t always accurate, it is still helpful to get an idea of the day’s water movement.”

Because some power generation lakes don’t have easily accessible generation forecasts, Yelas has developed a general rule-of-thumb. Throughout his career he has noticed that most of these lakes begin generating water in the afternoon, due to the increased electricity usage of nearby residents during the course of the day. It is also important, however, to pay close attention to recent weather patterns in order to have an accurate idea of the generation schedule.

“I always keep an eye on recent precipitation amounts, especially when I’m fishing a power generation lake,” Yelas said. “Following periods of heavy rain, a lot of dams will run wide-open all day long to prevent flooding. Conversely, during draught conditions the water may not move very much at all during the day.”

Regardless of the generation forecasts, Yelas stresses the importance of remaining flexible throughout the day. Since generation schedules are simply an approximation, there is always a chance that the dam will deviate from its timetable.

“There have been numerous times that I’ve been caught waiting for the water to move, and it didn’t move an inch,” Yelas said. “Those situations aren’t fun, so now I make sure that I have alternate game plans. Although my pattern in the 2002 Classic relied heavily on water movement, not having a backup plan can be a pretty big risk.” 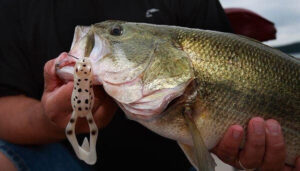 When fishing fluctuating water levels, Yelas believes that the biggest key to success is understanding the connection between water movement and fish positioning.

“Shallow fish move with the water, so when the dam pumps water into the lake, the fish get into a lot of very shallow cover,” Yelas said. “The same isn’t true for deeper fish, however. If a bass is sitting on a ledge, it’s not going to abandon that ledge when the water rises a few inches. They will, however, turn on and start feeding aggressively when that water starts to move.”

As the water movement stops and the water level begins to recede, Yelas has noticed that the shallow fish will move off of the bank and become difficult to catch. For this reason, he prefers targeting deep fish in low-water situations.

“I wish I knew where the shallow fish always go when the water drops, but nobody really knows,” Yelas said. “I do know, however, that they are pretty tough to catch. A lot of times they will suspend on break lines, and suspended fish are some of the hardest to catch. Deep fish are a better bet in low water because they remained positioned on channel ledges and points. You may have to slow it down with soft plastics, but they’re still there.”

Where to find them

In high-water situations, Yelas doesn’t spend much time targeting deep fish. Instead, he will fish his favorite high-water coverâ€” shoreline grass. When the tips of the grass are barely out of the water, that’s when he knows that things are right.

“You can definitely catch some big ones flipping and frogging shallow grass with about 1- to 2-feet of water in it,” Yelas said. “But if there’s less than 8-inches of water in the grass and I can see the stalks swaying in the wind, there’s generally not any fish in it. You may be able to catch some smaller ones, but nothing tournament-caliber. You have to remember, 12-inches of water is an enormous difference when you’re talking about shallow, shoreline grass.”

Shoreline grass isn’t the only cover that Yelas likes to target in high-water conditions. Rising water levels can push bass into all types of shallow cover, such as boat docks, seawalls and laydowns, where Yelas loves to flip a Berkley Gripper Jay’s Flipping Jig for unsuspecting big bass.

When the water drops on power generation lakes, shallow bass move towards deeper water. As the fish largely vacate shallow cover during low-water conditions, it becomes harder to pinpoint their location. Yelas has learned, however, that the bass don’t move far.

“When the water’s low, I’ve seen a bunch of bass just cruising in front of the coverâ€”about 10- to 20-feet in front of it,” Yelas said. “You can still catch these fish, but it takes time to figure out the right technique. I will still pitch my bait to the edge of the shallow cover, but I make sure to work it all the way back to the boat, because that’s where I’ll get most of my bites.”

In these situations, Yelas looks for places that have great shoreline cover accompanied by isolated pieces of cover in front of it, such as big stumps. When the water is sucked out of the lake, the bass will position on the isolated cover, providing an opportunity to make pinpoint casts to likely big bass hiding spots.

“It’s important to have a good pair of sunglasses when you’re dealing with low water levels,” Yelas said. “My Typhoons let me locate isolated cover before I get too closeâ€”if the fish see you first, you won’t catch them. When I find good-looking cover, I’ll fire a Berkley Frenzy Rattl’r or a big buzzbait towards it and get some really big bites.” 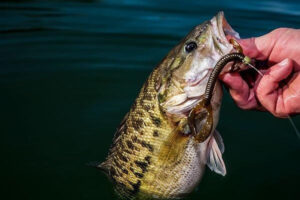 While power generation lakes can be difficult to fish, attitude is everything. Yelas believes that patience and a good mindset can lead to some really great days on these fisheries.

“Every fish doesn’t do the same thing,” Yelas said. “There’s always some fish that don’t follow the crowdâ€”kind of like people in that regard. When the water is down, don’t be afraid to try different things, whether it’s the outside edge of shallow cover, adjacent hard cover or nearby ledges. There’s no science to it, so just have a good time with it.”

Open-mindedness is an invaluable trait for an angler who frequents power generation lakes. The bass aren’t always going to be where you think they are, so trying different techniques can pay huge dividends. If you caught them using a certain bait in the morning, don’t be easily frustrated when they don’t eat the same thing in the afternoon.

“No matter what, you’ve always got to have an open mind,” Yelas said. “One of the biggest mistakes people make is running all over the lake to history spots when the fishing gets tough. If you know the fish are there, stay put and try some different stuff. They didn’t just pack up and leave.”

Yelas believes that nothing can compensate for time on the water. Spending a lot of time on the trolling motor is a great way to find those key areas where shallow fish relocate towards during low-water conditions.

“Pros fish a lot of lakes where we don’t have many honey holes,” Yelas said. “I’ve had to learn to catch all of the fish in my specific area, and running all around the lake isn’t always helpful. If you hunker down, read the conditions and figure out where the fish go during the water fluctuations, you will figure it out rather quickly.”

If you have the chance to fish a power generation lake this year, I strongly suggest it. Learning to fish in fluctuating water conditions is an outstanding way to improve your angling skills. With some basic knowledge of how bass respond to water generation and a good attitude, you can really put a hurting on some bass this year. 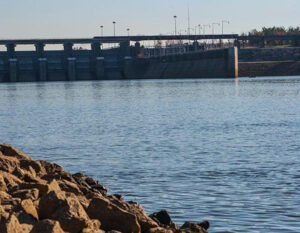