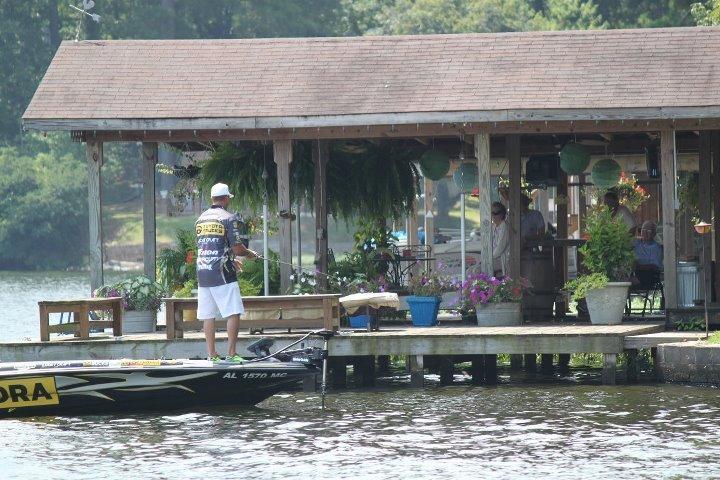 Alabama native Gerald Swindle has proven himself as one of the most animated and talented pro bass fishing superstars to ever tour the Bassmaster Elite Series. Growing up along the heavily docked Coosa River he became a revered dock fishing angler. Though he is no one trick pony, one thing is for certain: if there is a dock bite on competition water, look out.

Docks are a great, year-round fish attractant that many anglers don’t take advantage of.

“A lot of people get caught up in thinking that docks are a seasonal pattern,” Swindle said. “Dock fishing is not as much seasonal as it is daily, controlled by the weather.”

Bass are always around or under docks. If the sun is shining bright it will have the fish pushed under the dock and make them easier to catch, but they “house” under docks year round.

Perhaps the most puzzling piece to putting together a dock pattern is knowing which docks to fish. For Swindle, it’s a process of elimination.

In practice, he’ll get on a line of docks and fish down through them until he gets bites fishing every variation – main lake docks, docks in pockets, docks in creeks, fixed docks, floating docks and docks with boats tied up.

“Most of the time in practice, all I’ll establish is what type docks they’re using,” he said. “Once I establish that, I’ll ride and look for the same type docks and mark them on my GPS. It’s weird, but a lot of stuff I fish in a tournament, I have never made a cast on before.”

So the question turns from which docks to fish to should you fish the same docks more than once.

“Not in the same day,” Swindle said. “If it’s a two or three day event I will return and make that same pass.”

Most dock fish are resident fish and, although the same dock will attract another bass, it usually doesn’t happen within a couple hours. A lot of docks have the potential to hold bass over and over and over. As soon as you remove that one it won’t be long and another one will fill its spot.

The trick is knowing what to look for without being able to see it. The anatomy of a dock can include anything from drop offs to rock piles and brush to bare shady bottom. What to look for depends on what you’re trying to catch.

“If we have a lake that is mixed between spots and largemouths, you can pattern the type of bass you are trying to catch and not just the docks.”

The docks that primarily hold more spots are the ones that have 10 to 12 feet of water with some sort of structure beneath them. Structure is a point or break beneath the dock.

“I don’t like a lot of brush,” said Swindle. “A lot of times I’m just looking for fish that are in the shadow of the dock because they are so much easier to catch.”

Although bass live on the docks with brush, in a tournament situation, it’s easier for him to fish docks with just shade. He can figure out within one or two casts where the fish are and then repeat that cast on the next dock. This way, if they’re there, he can get them to bite and bite fast as opposed to fishing on both sides of brush, through the brush, and then risking losing the fish in brush if it bites.

When approaching a dock with spotted bass lurking below Swindle makes repetitive casts.

“If I feel like I’m making a good cast and I’m able to fish the majority of the dock by skipping under it and fishing the bait back out I’ll repeat that cast.”

Swindle will “fish the bait more” for spots. He keeps the bait in contact with the bottom hunting the break or ledge, works the bait slower, and fishes the bait all the way to the end of the dock.

A largemouth is generally more aggressive, and if you make the right cast you are usually going to catch him. Largemouths on docks are more of a target deal. He’ll come in from the side and work around the dock making three or four different casts and then move on. The flatter bottom contours are preferred when targeting largemouth bass, with ideally 4 to 5 feet of water beneath them.

Both species are prone to exhibit more aggression in current. Though there aren’t a lot of lakes that generate noticeable current on tour.

“If there is any current on that particular body of water you can almost bet the docks with current on them will be better than the others,” Swindle said. 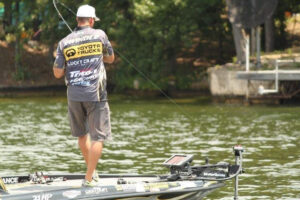 Swindle almost always skips the same bait, a 3/8-ounce Arkie jig.  He’ll play with the skirts a little, change colors and shorten them, but the weight is always the same. And that 3/8 ounce choice is by design.

“When you are fishing docks and trying to make that many accurate casts in one day and repeat the same thing the next day, you’ll learn that sticking with a weight and building up your muscle memory will make you a lot more accurate day in and day out,” he said.

Another important aspect to the muscle memory theory is Swindle’s rod and reel setup, a rod in the 7-foot range with a 6.3:1 gear-ratio reel. His current rod is the new 6-foot, 10-inch medium heavy Quantum EXO. His reel of choice is the new Quantum EXO PT Casting Reel.

“I like something with a little tip for control and accuracy of the cast and letting the bait load up on the rod.”

Accuracy always accounts for a large number of bites, but it is even more important when fishing clear water docks.

Swindle catches more fish on a clear water dock when he makes longer casts. Stay away from the dock as far as you can, still control your cast and place it in the target you want, and you’ll be a lot better off.

Muddy or clear water, fishing for largemouths or spots, he always uses Vicious Elite Fluorocarbon.  On a clear water lake he’ll skip 14-pound Vicious but that’s about as light as he goes. His favorite skipping line is 17 to 20 if he can get away with it. Knowing when to lighten up is determined by the bite.

“If you skip the bait in there, and as soon as it hits the bottom, the rod is pulling down, then he’s not looking at the line,” Swindle said. “You can cheat up and go to 20 pound test.”

If the fish aren’t active and you have to fish it, shake it, hop it up off the bottom and crawl it around, that should tell you to back off and downsize your line.

When lighter line alone doesn’t do the trick, it’s time to pull out the shaky head. 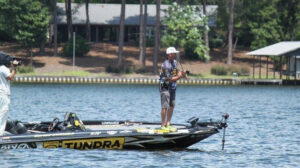 If they were there in practice, and he can’t get bit on tournament day, he’ll drop back. Finesse for Swindle is a Zoom Trick Worm rigged on an 1/8-ounce shaky head. Rod of choice, a 6-foot, 10-inch Quantum Shaw Grigsby Signature Series. He uses a medium size reel, so he can load it with 10-pound Vicious Braid and an 8 or 10-pound Vicious Elite Fluorocarbon leader. The best fit for this technique is a Quantum Tour Edition 30 PTiB spinning reel.

When asked to describe his perfect dock, you could almost hear him salivate through the phone. This is something he had apparently given a lot of thought.

“I want one facing upriver into the current,” he said. “I want a big wooden dock with a floating one out in front of it. I would love for there to be a point or a break underneath it about 6 to 10 feet deep about 10 feet off the bank so I could skip through it. And it’d have just a little bit of rough stuff or a hard bottom. If I find that, I get pretty excited because that’s usually the deal.”

Sunnier the better according to Swindle with a light breeze and a little current no matter what time of year. He recommends you get used to a bait, rod and reel combo and stick with it. Pay attention to the fish, and let them tell you when it’s time to downsize your bait and line. Use these tips to bass fish docks over and over again and realize it’s hit or miss with the largemouths because, according to Swindle, “catching a largemouth is kind of like a red-headed woman, she’s either on or she’s off.” 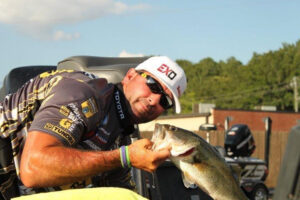