Jeff Kriet loves a good ledge bite in bass fishing, but he knows that making the most of his opportunities requires much more than persistent casting. Ledges require as much head work, as  rod work. Kriet is an ol’ dragger from way back, but he’s learned to be more diverse to have more consistent catches across the country while fishing deep in the summer for bass on creek and river channel edges.

For starters, Kriet knows he can catch ledge fish on various lures, but the Bassmaster Elite Series pro from Oklahoma holds a crystal clear perspective on where each one stands in the process.

Heavy on strategy and time-management, Kriet’s plan for prioritizing ledge baits divides his arsenal into “fish finders” and “big-bite” baits. Using the former like infantry, he’ll sweep through promising areas to locate schools of fish, but once he does, Kriet shifts gears from the quantity-oriented baits and pulls out those that catch the bigger fish.

Like sending in the sniper, he’d rather pick off the high-value targets than burn a lot of time weeding through smaller fish—often at the risk of fragmenting the school and losing the big-fish opportunities.

In describing his game plan, Kriet’s success depends on lure transitions at the right times like a football coach sending in his bruiser running back to score on the 1-yard line. 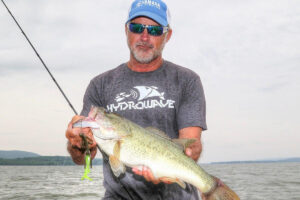 Kriet typically begins his ledge assault with a Carolina-rigged lizard. A 3/4- to 1-ounce weight allows him to rumble across the target area and feel those hard spots, stumps and other irregularities we know as bass magnets.

Now, among his search bait squad, Kriet said he typically expects his biggest results from a Texas-rigged 10-inch worm. The worm often puts a bonus kicker in his well, and the Carolina rig and football jig occasionally do the same. He won’t let himself be lulled into a massive time suck with the pace these techniques require.

“I’m going with the law of averages,” Kriet said. “I know that in ledge tournaments, the biggest sacks I’ve weighed in — I’m talking 23-30 pounds — are just about always on a big moving bait. Typically, you’re going to catch a bigger fish on something you’re winding.” 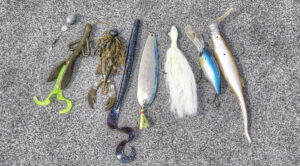 So, Step 1 is to locate a school, Step 2, get ‘em fired up enough to catch a couple in short succession. Then comes Step 3 — send in the big full back.

“Once I catch a couple in a row, I’m going to immediately pick up a big crankbait, a swimbait, a hair jig or even a big spoon,” he said. “I want something large moving down there.

“And the reason I do it quickly is that I don’t want to catch 10 and then switch. The bigger fish are typically going to be the first couple fish that will bite in a school. When you get them fired up, if you keep throwing a football jig, a Carolina rig or a big worm in there, the 2-pounder is going to get it.”

So, switching to larger, more aggressive baits will help you weed out the smaller fish and, ideally, nab something boast-worthy. Can’t argue with that straightforward truth — but the logic goes deeper.

“You want to catch the biggest fish in that school immediately because every time you catch a bass off a school, you’re repositioning that school,” Kriet said. 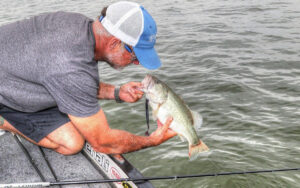 DON’T WEAR OUT YOUR WELCOME

And to the point on moving schools, Kriet warns against losing yourself in the rush of bent rods. Enjoy it while it lasts, but discipline yourself to recognize the decline.

“A common mistake I see anglers make is staying entirely too long,” he said. “If I have an offshore spot, I might hit it five or six times a day.

“I won’t sit on a spot for a long time. Generally, if I sit there for an hour, there are good things happening.”

Of course, even the hottest streak eventually cools. So, if Kriet’s whacking the big heads with a big-bait rotation, you can bet he’s keeping close watch on whether he’s moving up or down the quality scale.

“Once I notice my size going down, I immediately leave,” he said. “I’ll come back two hours later and the school is right back where they’re supposed to be. They move right back to the sweet spot.

“What happens is when you’re fighting one fish, two or three more are swimming with him and pretty soon, they’re off the spot. Then, more fish move off the school and eventually, they’re all out in no-man’s land.”

The trick, is fishing efficiently and logically.

“There’s always a specific spot on a ledge that holds 90 percent of the fish,” he said. “It’s like a bee hive; you have worker bees around the perimeter, and then you have the actual hive. That’s where I want to be—where the biggest concentration of fish feed.

“If you can leave and come back, you can do that all day. You’ll catch a couple big ones, run around and hit a couple more spots and come back 30-40 minutes later. Then, guess what? There’s another big one, right where you caught one earlier.”

So be smart with your lure selection. Get the school going, find them, then move to your bigger moving baits to increase the quality.