In many parts of the country, bass are currently stuck between summer and fall patterns, which is resulting in some pretty tough fishing days for anglers. If you’re having problems catching a solid limit of bass lately, consider fishing crankbaits on wing dams.

2013 BFL All-American Champion and St. Croix Rods pro Kerry Milner makes a good portion of his living by utilizing wing dams and current seams. Using current to his advantage not only led him to a first-place finish at the BFL All-American on Lake Nickajack, but also a fourth-place finish and a $55,000 payday at the 2013 Forrest Wood Cup.

According to Milner, fishing crankbaits on wing dams is an outstanding way to beat the summertime bass fishing blues.

One of the primary reasons bass fishing becomes so slow during the late summer months is because of poor water quality. As the oxygen content depletes in the deeper depths, bass vacate these areas and disperse in search of more suitable water conditions. Milner looks to wing dams as a cure for this common problem.

“There are 2 primary reasons I like to focus on wing dams in the summer—high oxygen levels and bait,” Milner said. “These areas can be absolutely killer this time of year. As the water flows around these wing dams, large concentrations of bait position on them due to the increased oxygen levels. As we all know, wherever there’s a lot of bait in hot weather, big bass are going to be nearby.”

“When bass hide out on wing dams, they’re looking for an easy meal,” Milner said. “Not only do the rocks provide concealment, but they also give the bass a hard surface to pin their prey against.”

Although many anglers target the down-current side of wing dams and other similar current seams, Milner catches some of his biggest bass on the topside of these areas. He compares this phenomenon to the windshield of a bass boat. 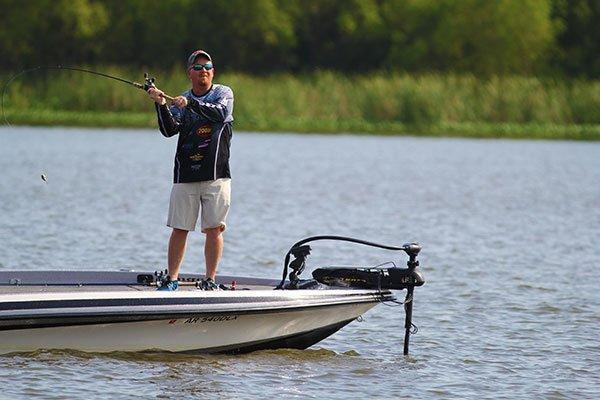 “A lot of folks like to target the backside of wing dams, but I’m telling you—some absolute giants can actually get stacked up on the top side of the rocks,” Milner said. “As the water bulges over the rocks, there’s always a spot on top of the rocks that provides neutral buoyancy, allowing the bass to sit still without exerting much energy. It’s just like the wind bulging over the windshield in your boat.”

In a perfect world, bass want to stuff their bellies without exerting any unnecessary energy. The windshield effect provides bass with that opportunity. As the bass sit face up-current in the slack water on top of the submerged wing dam rocks, the current actually does the work for them by pushing thousands of tiny shad directly to them.

“Wing dams give bass the perfect feeding scenario, which is why you can expect to catch bass on them throughout the entire year,” Milner said. “If you like to drag soft plastics in deep water, you can also use the windshield effect on deep rock piles when fishing tailraces. That’s exactly how I won the BFL All-American.” 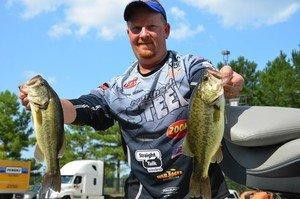 When fishing river systems, it’s not uncommon to see large wing dams separating shallow, backwater slews from the main river. While covering the 2013 Forrest Wood Cup, the Wired2Fish crew saw Milner targeting small openings, or as he calls them “blowholes”, in the Red River wing dams. His reasoning makes a lot of sense.

“Blowholes act as a perfect bottleneck between the backwater and the main river,” Milner said. “To get in and out of these slews, bass and baitfish have to pass through these areasâ€”they don’t have a choice. By concentrating the fish, these wing dam cuts can provide some incredible crankbait fishing. In practice, I caught 30 bass off of one in 30 casts. It’s a ton of fun.”

While searching for a solid crankbait bite around these blowholes, Milner looks for the smallest ones he can find. Although the larger cuts can certainly hold fish, he believes the smaller openings concentrate the fish better. According to him, these areas are where you can expect to find massive numbers of hungry bass.

“The cuts in these wing dams also provide big, kicker bass with both deep and shallow water,” Milner said. “When there’s shallow water on the backwater side and deep water on the river side, bass are able to feed shallow while having the refuge of deeper water nearby. Big bass almost always stay in close proximity to deep water.”

Crank your heart out

“Shallow wing dams call for 2 specific crankbaits: a Bandit 200 or a Lucky Craft 1.5,” Milner said. “It’s important to use a buoyant crankbait that won’t get wedged into the rocks, and these crankbaits are huge producers in this situation.” 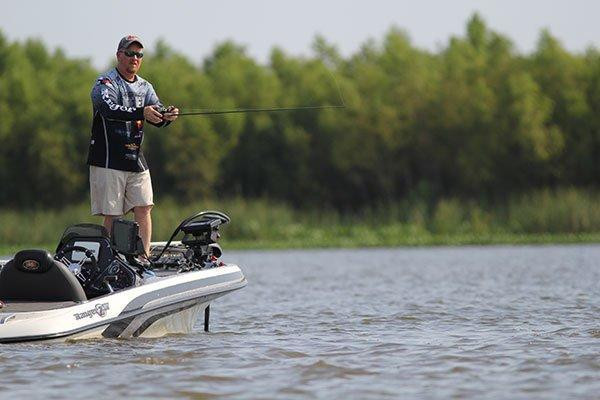 When approaching these wing dams, Milner starts on the down-current side and casts up-current. It makes it easier to position his boat while also allowing him to imitate the natural environmental factors.

“Bass will face up-current in order to ambush shad, so I take advantage of that when fishing wing dams,” Milner said. “Sometimes a certain mistake in casting angles can cost you a lot of money in tournaments.”

Milner isn’t a believer in slow-cranking his crankbaits around wing dams. You’ll usually see him burning it in order to cause vicious reaction strikes. When his crankbait collides with the rocks, he’ll slow his retrieve down in order to “crawl” the lure across the rocks.

“If you’re not hitting the rocks, you won’t get bit very much,” Milner said. “They’ll hammer it when you bounce it off the rocks, though. I use a 7-foot, medium-action St. Croix Avid Series Cranking Rod because it has a really soft, sensitive tip which allows me to feel my crankbait crawl across the rocks while also allowing for solid hooksets without ripping the treble hooks out of the bass’ mouth.”

As we all wait for summer to end and begin looking forward to fall, make sure to look for wing dams on your favorite fishery. When the bass aren’t cooperating, it’s a quick way to fill your livewell and have a lot of fun in the process.