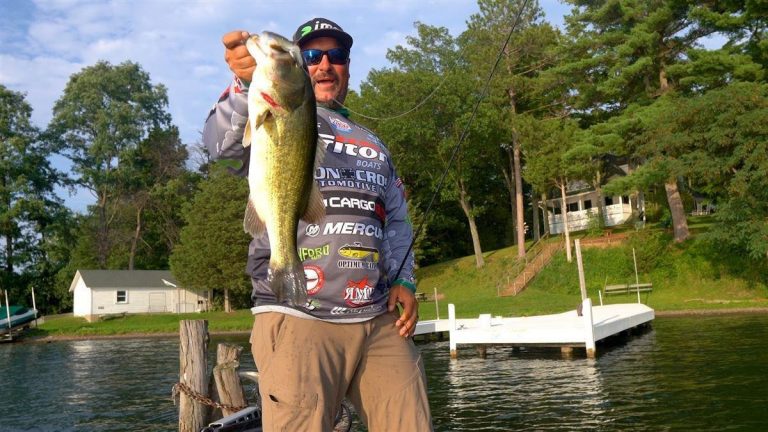 Fred Roumbanis was at the forefront of swimbaits in professional bass fishing tournaments many moons ago, and his approach with swimbaits on docks for bigger than average bass has been refined since the early days out in California to fit fisheries from coast to coast and all of the fishing seasons.

His bait of choice in recent years has been his signature Boom Boom swimbait from Optimum Baits. And now the Baby Boom Boom has become his staple weapon fishing the BASS Elite Series and MLF competitions as well as other pro-am fishing tournaments around the house. He helped design the baits to have a good shimmy and thump but also be able to skip well around shallow cover and under things like docks on a weighted swimbait hook. It’s a bass fishing application that he can take to just about any lake in the country and fish with confidence. While many other anglers are targeting docks by flipping and pitching, he gives the bass a much less seen profile and action.

Roumbanis spills the beans on his unique rod and reel setup for fishing smaller swimbaits around docks, his favorite rigging methods, color choices, retrieve speed, and of course how he targets and dissects specific spots on the docks and other forms of hard cover that provide perfect ambush points for big bass.

Watch as Roumbanis catches a true New York giant largemouth bass on his swimbait as well as several other bass while filming a couple weeks ago. This was his first time fishing on this particular lake and he wasn’t even sure if the lake had a healthy population of largemouth bass. It’s one of the reasons Roumbanis is so fond of fishing swimbaits as opposed to other baits because he can get it further back under places and fish through the spot rapidly while covering water.

He usually sticks with a 1/4 ounce weighted Hayabusa 958 weighted worm hook in the 7/0 size with the 4 1/2 inch Baby Boom Boom swimbait and goes up to an 8/0 or bigger on the 6-inch original Boom Boom swimbait. The 1/4 ounce is enough to keep the swimbait down and swimming straight when you hit that right speed. It’s especially effective on shallower docks with good visibility, but he’s also had a lot of success with darker colors in more stained waters. Most of the time he starts with the Baby Boom Boom and then will go up to the 6-inch size if he finds a better quality of bass, bigger forage or other cues that let him know it’s a fishery where a bigger bait might get him a bigger bite. But big ones obviously bite the 4 1/2 inch size bait as well. Catching a largemouth bass nearly 6 pounds in the summer in New York is no small feat.

If you’re like us, you’re going to want to add this solid and proven technique to the fishing arsenal in upcoming tournaments this fall, winter and just about every season from here on out.