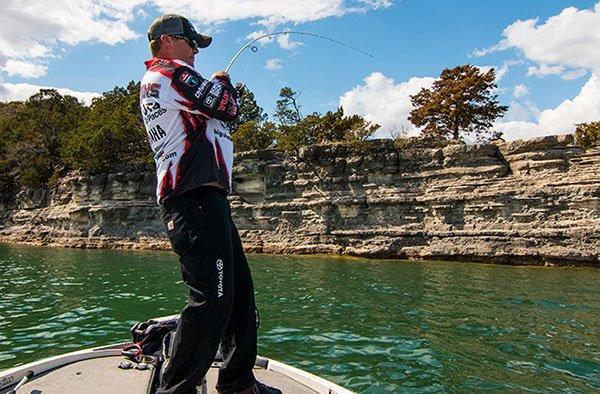 Post-spawn bass fishing is widely considered a feast-or-famine season for many anglers. Gone are the days of expecting a bite on every obvious piece of cover; as the bass leave their more predictable shallow water haunts in search of deep structure, efficiency and continuous experimentation are indispensable.

Elite Series pro Terry Scroggins doesn’t let the nomadic nature of early summer post-spawn bass throw him for a loop. Throughout his career, he has developed 6 easy tips that will help you stay on top of the bass when other anglers tend to struggle.

Avoid fishing in the past

Most of us are creatures of habit—we tend to go to bed at the same time each night, wake up at the same time each morning and in a bass angler’s case, we’re often tempted to fish the same areas that have previously yielded big bass and fond fishing memories. If you can put your fishing “history” on the backburner, however, Scroggins believes you’ll be ahead of the game this season.

“This is an excellent time to catch big bass. They’ve been stressed out for the past several weeks and they want to fatten up. As they get schooled up and start feeding aggressively, you can have some ridiculous days on the water.”

“Post-spawn bass fishing is definitely a tricky time of year,” Scroggins said. “Once the bass wrap up the spawning process, they want to move to deeper structure as quickly as possible. This leaves anglers in a tough situation—we have to figure out a way to intercept them throughout their migration route. The fish move daily, which makes it extremely important to adapt each and every day you’re on the water.”

In other words—don’t be stubborn to a specific spot or pattern. Even if you caught a lot of nice bass in an area yesterday, those fish can move hundreds of yards overnight and be gone today.

“A lot of folks want to fish the spots that worked last week or even the previous day, but fishing history doesn’t work this time of year,” Scroggins said. “If your best areas don’t produce, always look for the next hard structure closer to deep water such as shell beds, rock piles or stumps and start your search there.”

Many types of bass fishing structure and cover are most productive on a seasonal basis, but Scroggins has found steep banks to offer outstanding fishing opportunities throughout the entire year. In the early summer months as the majority of bass make their annual trek to deeper water, they use these banks for several different reasons.

Keep your spinning gear nearby

Although finesse fishing has an unfair reputation for catching smaller fish, always make sure you load your spinning gear before you fish for post-spawn bass. Big females often require a period of recovery following the rigors of the spawn, making small, subtle presentations very effective.

“Before post-spawners start focusing on food, they can be fairly inactive for a short period,” Scroggins said. “The loud thump of a big crankbait and the large profile of a jig may not always be what they’re looking for, so don’t be afraid of spinning gear because it catches some really big fish in the early summer. I caught a 9-pound, 12-ounce bass on Toledo Bend a few years ago using 10-pound braid and with a 6-pound leader.”

Now, you probably won’t catch a 9-pounder each time you break out your spinning gear, but these finesse presentations will generate bites when other tactics fail. In a season when bass are constantly on the move, a few extra bites are all that’s needed to start putting together the daily post-spawn puzzle.

Time management is no more critical to your bass fishing success than it is right now. Getting out of rhythm and deviating from your game plan for just a few minutes can totally derail and otherwise perfect game plan.

Beware of the low-hanging fruit

Many of us are drawn to the bank whenever we go bass fishing. The laydowns, visual bank transitions and docks are tough to bypass, but Scroggins makes a concerted effort to steer clear of the distraction. His reasoning makes a lot of sense.

Want to learn more about these resident backwater bass?  Check out our feature with Larry Nixon.

“On any body of water you’ll visit, there will be shallow fish,” Scroggins said. “There’s no doubt about it. But I like to find deep fish because I’m looking for schools—somewhere I can catch 40 bass several days in a row. Shallow fish can help you in the mornings, but try not to get too caught up with them.”

When you find shallow fish in the summer months, they’re more than likely considered “resident” fish, meaning they spend their entire lives in shallow water. They’re not too difficult to catch which can result in a fun day of fishing, but once you catch them—they’re gone. These areas don’t replenish like deep structure does, which can spell trouble for tournament anglers in a multi-day event. 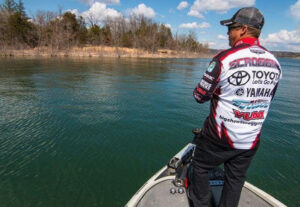 When fishing deep channel ledges later in the day, Scroggins begins by utilizing faster presentations before slowing down to “mop-up” the more lethargic bass with more deliberate techniques.

Don’t let the finicky nature of post-spawn bass mess with your confidence this summer. If you can spend some extra time on the water and experiment in new places, target steep banks, get comfortable with spinning gear and develop a solid, systematic game plan, you’ll enjoy a lot of success and get a lot of satisfaction from your hard work.