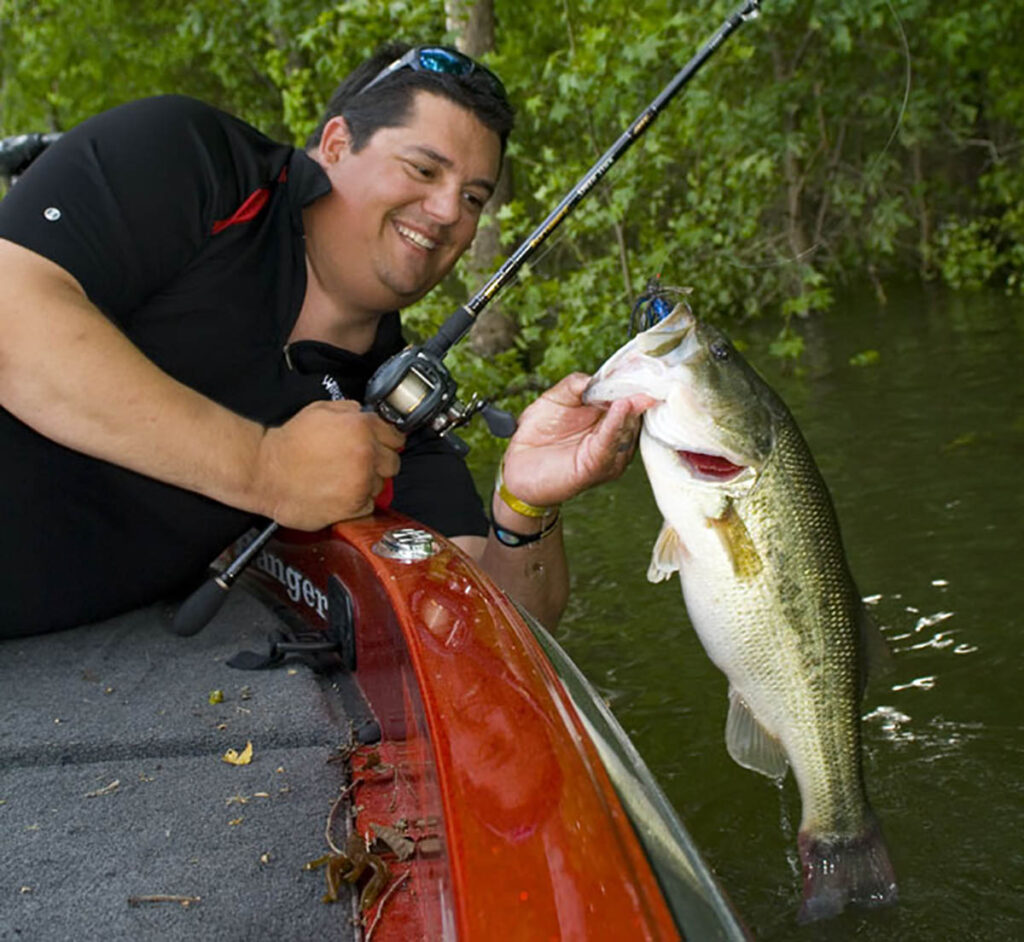 Learn to trigger fish even when they’re not hungry

Bass aren’t that smart, they just aren’t always hungry. The sooner anglers accept that, the better. So the dilemma that often faces anglers is that the fish aren’t biting because they aren’t hungry. But you want them to bite because you’ve only got a certain day to spend fishing or you’re in a tournament situation and have to produce fish.

Well they’re not eating because they’re hungry so they’re going to have to react to your bait being in their comfort zone. We’ve all heard guys talking about firing up a school, getting them to fire, exciting the school and other descriptions of how anglers have gone from not getting a single bite to catching fish every cast.

We’ve come to believe that what is happening at these times is a combination of the two reasons a bass bites. The fish go from not being hungry to actively feeding and violently reacting to agitating prey in their strike zone. We’ve seen it with crankbaits, jerkbaits, topwaters, jigging and jerk spoons, and other various baits.

The fact is when you caused one bass to get excited about a bait, his buddies saw what he was doing and now they want some too. They’re much like us in that regard. I can remember as kids, my sisters not wanting anything for snack until I walked back in the room with a popsicle and suddenly they wanted one too.

So really sometimes it’s only about making one fish react. In our mind, that’s all fishing is. How to make one fish bite. Then once you make that one bite, figure out how to make the next one bite.

Here a few tips to keep you reeling in the fish and making the most of the bass you find. 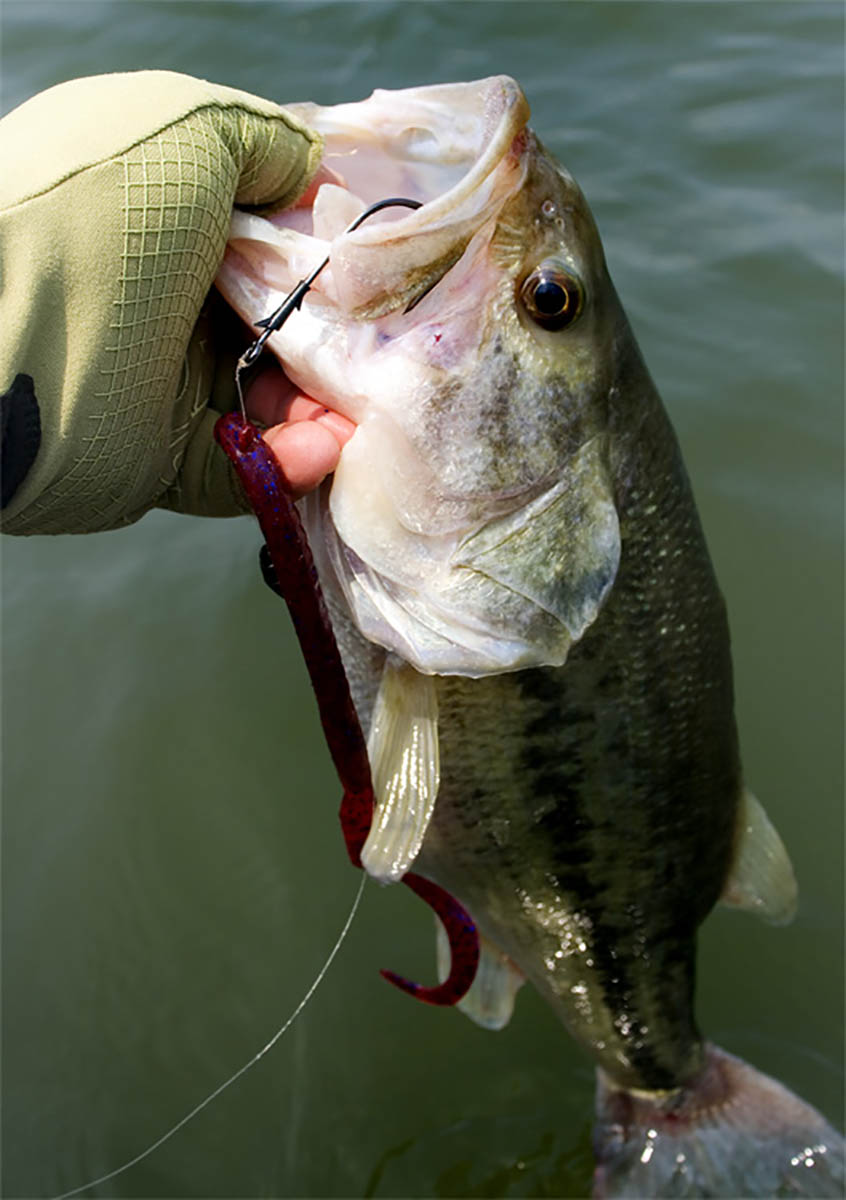 Vary your retrieves. Hop it, rip it, snatch it, jerk it, grind it, scoot it, stroke it and move it largely and often to see if one fish will react in the area. One retrieve, try it right along the bottom. Then on the next retrieve, hop it up and see if they aren’t suspended just off the bottom. Reel it through one time slow and then come back through the area real fast to get them used to it being there but not sure exactly what it is.

Don’t just go through the motions.  I think we get comfortable with fishing a certain way. The worst is when we continue to fish a certain way when it’s not producing bass. You should constantly be changing. Varying your retrieves helps but more importantly, fish outside your comfort zone at times. Burn a bait as hard as you can, violently rip a bait, make the bait go erratic, even if it’s hard and tiresome.

“You can reel a crankbait through an area real slow,” said Michael Iaconelli. “The bass can look at it, study it and decide that something doesn’t look exactly right. Then you burn the bait passed them on the next cast and now he only gets a glimpse of it as it comes by him and he has to react in a split second or he’ll lose his chance.”

Saturate the area. Fish don’t suspend motionless all the time. They are often moving up and down an area, in and out of a piece of cover, towards and away from structure. Because of this, it’s not likely your bait landed right next to a fish. So you have to play the odds. Ask yourself how you can maximize the odds that your bait is in fact in front of a bass that is roaming around in an area. So make 20 casts to a log. Make casts with three different lures to the same spot. Make sure you’ve had your bait in front of a bass at least a few times on each stop.

Ignore the norms. Fish won’t bite buzzbaits and frogs, when it’s very cold. Yet I’ve seen tournaments won on a buzzbait when it was snowing and Dean Rojas catch 20-plus-pound limits on the frog in the early prespawn period. Sometimes the fish are there and not necessarily hungry, but they are still creatures of habit and if something is in their face making a commotion, they’re going to settle the noise. Don’t be afraid to pull something out of the norm from the box and give it a workout in an area if you really feel the fish are there.

Give them the one-two combination. I’ve seen several instances where a school probably got activated by one bait but then started eating another one. I’ll give you an example or two. I had a good school located recently. I was catching some fish on a worm and a jig. The fish quit biting for a second. I fired a crankbait through the school for several casts. I think the crankbait is good at getting them looking even if they don’t bite it. Then I picked up a big spoon and first cast I started catching them on the spoon.

I’ve seen the same thing happen with bedding bass. You get them reacting to one bait and swirling and spinning on it, then you pick up a new bait and fire it in there and the fish jumps all over it. It’s something about getting the fish almost agitated with one bait but they are still leary of it. Then when a new bait comes in their zone, they figure this is too much to stand for any longer.

In my experience, the only difference between a novice angler and a very seasoned angler, is the latter’s ability to get fish to react even when they are not feeding. A novice angler will pull up to a spot that has fish, make a handful of slow presentations and then leave or keep moving up the bank or structure. The seasoned angler will continue working his lures as if there is a bass watching it at all times, trying to taunt it into biting. That is when you’ll figure out that bass aren’t always hungry, but thank goodness, they just don’t have the restraint to resist their own animal impulses.