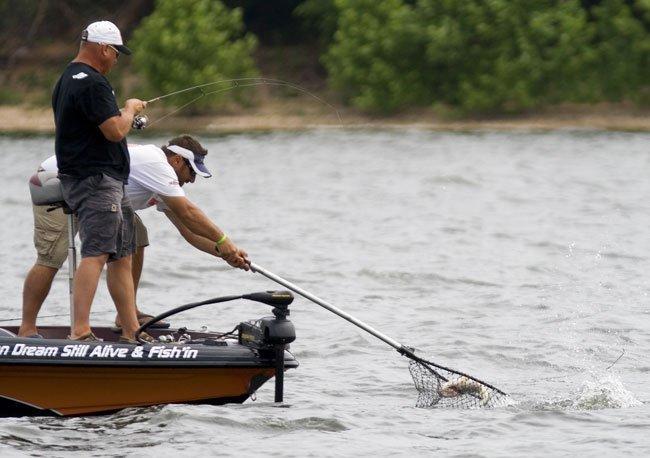 Sometimes good intentions go without reward in fishing. You figure the fish should be doing one thing and really reacting to a certain presentation in a certain location because they always have this time of year on your favorite reservoir. Then you find out your best presentation isn’t getting the job done. You try all the colors and all the sizes that you can think of.

A natural tendency is to leave. But often times, on highly pressured reservoirs, they are merely conditioned. We’re going to be talking about “triggering” fish in an upcoming blog, but one technique seems to be working for pressured fish more and more.

Deep shaky head fishing is really gaining momentum for fishing offshore, whether it’s on clear reservoirs in the Deep South like Lanier and Clarks Hill or northern fisheries like Champlain and Erie. The technique seems to not only get more bites but more and more, we’re seeing it play a big role in catching big fish too.

In the recent FLW Tour event on Kentucky Lake, Rich Lowitzki had his best finish as a pro and was in the top 10 going into day three, with 90 percent of his catch for the first two days coming on a shaky head out deep.

His system may not be rocket science, but it definitely powered him into a strong finish in an event when the fish were highly pressured but largely schooled.

“I don’t claim to be an expert or anything,” Lowitzki said. “I’ve got a company that makes one of the best shaky heads on the market, and if you look at my history, the places I do well are places where a shaky head really shines. But this event was different.”

Lowitzki practiced for three days on Kentucky Lake with some co-angler partners and while they threw the typical offshore mix of crankbaits, worms and jigs, he kept throwing the shaky head. Soon he was gaining confidence that the shaky head might actually be a better offering.

He decided to test his theory with a technique he does a lot up north on the great lakes, drifting. He picked up a rod and cast out a 3/4-ounce football jig. Then he cast out a 5/16 JimRic shaky head with a Zoom Trick Worm. He drug both baits side by side with his partners. He was getting bites in an area on the football jig but he was getting three times as many on the shaky head and bigger fish. He’d catch a 1 3/4-pound fish on the jig, and then catch a 2 1/2-pound bass on the shaky head.

That gave him the confidence to stick with it for the event. The first day he had nearly 20 pounds of fish on the shaky head, including two fish weighing more than 5 pounds.

“I really just work three worms on a shaky head,” Lowitzki said. “If I’m throwing a Zoom Trick Worm in water deeper than 20 feet, I use a 5/16 ounce head. If I’m throwing a Poor Boys Baits Jerkworm or a Yamamoto Senko, I throw it on a lighter 1/4-ounce head because the worms are heavier and bulkier and fall about the same.”

Admittedly Lowitzki favors a spinning rod and reel for his shaky head fishing. One reason is he never goes with line heavier than 10-pound test and often fishes with 6 or 8-pound test. In fact some of his bigger fish have come on 8-pound fluorocarbon. His preferred setup is a Daiwa Steez reel which he feels is the best spinning reel ever made and Dobyns Champion Series 762 spinning rod.

“If you have good fish fighting skills, you really have nothing to worry about with the lighter line,” Lowitzki said. “You have to have your drag set right and know when to back real. But the biggest key is to just be patient.”

During this event, Lowitzki proved the point. He set the hook on a big fish. A second later his co-angler did too. They were both fighting good fish. Lowitzki coached his co-angler to fight his fish up to the boat and he would net it. His co-angler seemed more concerned with landing Lowitzki’s fish which was bigger.

“I said look, just take your time and I’ll net yours and then when you get him in the boat, you just dip mine.”

He scooped his co-anglers fish, and then went back to playing his fish and seconds later landed his fish.

Lowitzki also advises changing up your presentation from day to day and sometimes even in the same day. Some days you’ll find a deep school and as soon as the bait hits the bottom the fish are on it. Some days they want it crawled slowly over every rock and occasionally just stopped and shook a little. Some days he hops it when he sees fish suspended just off the bottom.

He believes that the lighter bait has a very natural fall and when the fish are grouped up, it’s just too easy an opportunity for them to pass. The key is just getting it in front of the right quality fish. The diminutive size of a shaky head really isn’t an issue for a big fish. He’s an opportunist and eats it because it’s easy.

Lowitzki believes that different shaky heads have a different fall. He’s designed his head with a 90-degree bend in the hook and feels that when he hops it, he can impart a little different action and fall to it.

Obviously, throwing the bait more and experimenting with it will bring more confidence with it. It’s often overlooked in power fishing situations because guys feel likes it’s something they “have to throw” in difficult situations. So when they have the opportunity to fish with big tackle and big baits, they shun the minuscule offering of a shaky head. That’s when it really makes a difference.

“David Dudley called me after the Kentucky Lake tournament and said he’d heard that I caught a bunch of fish on the shaky head,” Lowitzki said. “He couldn’t believe it and prodded me to tell him the truth about what I was really throwing. He finally believed me when I told him that’s what I caught the majority of my fish on. He said, “˜so I got my butt handed to me on Kentucky Lake by a shaky head?'”

While it’s not the end of all discussions of catching fish offshore, it shouldn’t be viewed as just shallow clear water bait or something you throw when the weather is bad and the bite is tough. It can actually be a better offering when the fish are really chomping in big schools around rocks, sparse grass, wood and more.