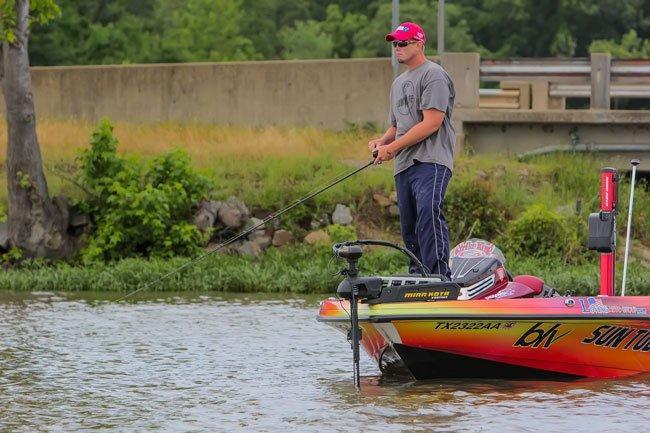 The odds tend to stack against bass anglers this time of year. Sure, some of the bass are stuck in that strange “in-between” period right now but most importantly, they’re wise to our tricks. For the last several months, they’ve likely endured ridiculous fishing pressure and they’ve seen everything we have to throw at them. The result is unfortunate, but true nonetheless—a classic case of late-summer lockjaw.

Luckily for us, we have crankbait masters such as Elite Series pro Keith Combs we can turn to when these warm weather bass make our heads spin. According to him, a squarebill and the desire to venture off the beaten path is the perfect cure for these hot, sticky summertime blues.

There’s a big misconception among many anglers when it comes to targeting big bass during the dog days of summer—just because the bass are tough to catch doesn’t mean they’re lethargic. Many of us may actually be fishing too slowly for their liking.

“I’ve caught crankbait bass off of lounge chairs, busted up docks, capsized johnboats and every other kind of trash you can imagine. Sometimes the most overlooked cover can provide an excellent home for late-summer bass.”

“When you get into summertime, it can definitely get tough,” Combs said. “Springtime is easy because the fish are simply in a biting mood and they’ve been totally unmolested all winter. Now, however, they know what’s up. Contrary to popular belief, both the forage and bass move very quickly throughout the summer, making a fast-moving squarebill an ideal selection. Even if they’re not hungry, you can still force feed it to ‘em.”

Squarebill? Wait just a minute. Aren’t we supposed to be fishing deep throughout the summer? What about all that offshore stuff we’re supposed to be doing? When the water temperatures hit the high 80-degree range, you can expect these half-cooked bass to seek refuge in the shallows.

“It’s very common for the deep bite to rapidly deteriorate this time of year,” Combs said. “Many times you’ll catch bass the deepest of the entire year when they first move offshore after the spawn—that’s when they’re happy living in 25 to 35 feet of water. When the water starts flirting with that 90-degree mark, a lot of them are going to return to their shallow dwellings in search of more suitable water conditions.” 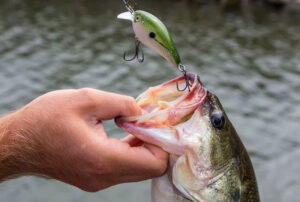 When you and I fish our Saturday morning derbies, it’s usually pretty simple— hit our best stuff, fill the meat locker and win a little cash. There’s not much worry about managing fish over multiple days. While competing in four-day Elite Series tournaments, however, Combs goes to great lengths to find solid backup plans. This preparation opened his eyes to the road less traveled.

“Most of the time, I find myself fishing the most obvious areas in the beginning of a tournament,” Combs said. “But by day three or four, I’ll start managing my fish more and visiting some more isolated, inconspicuous-looking areas. These small, hard-to-find areas often hold the biggest fish of the entire tournament because a lot of folks overlook them. These fish just don’t get bothered, which is why you should always take time find some less obvious cranking holes.”

Hotspot No. 1: Fly through rows of pier docks

Most of us have probably thrown a squarebill at a dock a time or two, but what’s your natural urge when you see one of these wooden beauties? If you’re in the majority, you probably can’t wait to skip a jig or soft plastic under there. That’s exactly why Combs dissects them with a crankbait.

“Most folks are going to flip and pitch docks instead of cranking them,” Combs said. “I believe this is the reason I catch a lot of giant bass cranking a 1.5 or 2.5 Strike King KVD HC Square Bill Crankbait on docks. And I don’t really focus on the ‘good looking’ docks because those are the ones that get pounded. That’s the beauty of a crankbait—I can cover a bunch of docks in a really short period of time.”

When approaching these docks, Combs makes certain to keep his distance for the first few casts. Some of his best catches occur where many anglers tend to position their boats.

“My first cast will always be 30 to 40 feet in front of the dock,” Combs said. “Not only do a lot of people ignore the water in front of the dock, but this is also where you’ll find a lot of brush piles. Dock owners will often sink all kinds of trash a good ways in front of their dock and it’s perfect for a squarebill. If you get on top of it, you’ll ruin it, so make sure to approach them with caution.”

Shallow flats are very overlooked by anglers throughout the summertime, but that doesn’t mean they don’t play host to really big bass. Where there’s bait, there will be bass—and these areas are often loaded with groceries.

“If I have a lot of time to spend on a lake, I always want to start on some sort of big, featureless flat,” Combs said. “In the summer, they’ll always hold bait and if you can find small pieces of cover scattered throughout, it’s well worth spending time on. There may only be two or three little stick-ups on a huge flat, but those are the best ones because a lot of people will drive right by them because they’re not particularly eye-catching.”

While many shallow areas are prone to host resident fish in the summer, that’s not necessarily the case when targeting these flats. According to Combs, these areas can replenish multiple times throughout a single day.

“If you find a lot of bait on a particular flat along with a few pieces of cover, make a point to come back to the area every hour or so,” Combs said. “The cover may only hold a few bass, so you probably won’t catch your whole limit on the first pass. When you pluck a few off, however, it seems like there are a lot more fish lined up and waiting to use the same piece of cover.”

Hotspot No. 3: Hit the riprap stretches others leave behind 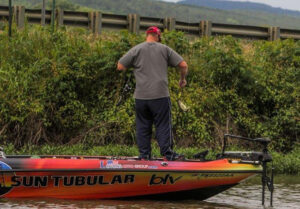 When the fishing gets tough in the late-summer months, the riprap banks found near bridges attract hoards of anglers. And who can blame ‘em? Riprap is known to hold big bass. But Combs has noticed a prevalent habit that has helped him catch the fish so many others leave behind.

“Most anglers pull up to a bridge, hit the corners and leave,” Combs said. “But I do a lot of damage cranking down the entire stretch of riprap because not many people do it. Keep an eye out for any irregularities such as larger boulders, small grass beds and windblown logs because that’s where a lot of your bites will occur.”

In addition to targeting irregular features, Combs also suggests two techniques that have paid big dividends throughout his career.

Watch your electronics—“I keep my eyes glued to my Humminbird whenever I’m fishing these long stretches of riprap,” Combs said. “I’ll make note of any depth changes because they’re often indicative of some sort of channel swing that can hold large concentrations of bass. They can slide up on the rocks to feed and swim back out to relatively deeper water without burning much energy.”Start with a 45—“I like to begin by casting at a 45-degree angle to the riprap because it allows me to saturate several different depth zones on each cast,” Combs said. “Once I get dialed-in and start catching fish, that’s when I’ll start paralleling the rocks and concentrating my efforts in specific depth zones.”

Hotspot No. 4: Target the lips of shallow ditches

Whether it’s a small creek channel running through a shallow flat or a manmade ditch that has been dredged, try to dedicate some time towards finding these subtle depth changes this time of year. They may take a while to find, but when you finally locate one, you can get healthy in a hurry.

“Little ditches and drains get very little pressure,” Combs said. “And I think that’s because they’re hard to find. I spend a lot of time looking for them on my Humminbird, but you can also wing a crankbait around on shallow flats and pay close attention to where you lose bottom contact. All it takes is just a small, two-foot depression and you can absolutely hammer ‘em.”

If you find one of these ditches, try to be patient if you’re having trouble getting bites. Sometimes it takes hundreds of casts before finding that magical “sweet spot”.

“The bass will often be congregated in just a very small section of a several hundred yard-long ditch,” Combs said. “I like to position my boat in the ditch and cast to the edges. The most active fish usually position on the lips of these ditches, so I like to be sitting in four to seven feet and cast into two feet of water.”

Hotspot No. 5: Search for the glowing hard spots

Sometimes the subtlest of areas can hold some of a fishery’s largest bass and Combs proved this theory in the 2012 TTBC on Lake Conroe. He has been able to apply that experience on different lakes throughout the country with great success.

“At Lake Conroe, I was just idling around with Side Imaging and saw a huge, glowing hard spot on my graph,” Combs said. “The entire creek had a soft bottom except for this one little area and I absolutely hammered ‘em there every single day on a squarebill. I could feel it with my crankbait or see it with my naked eye. That goes to show you, it doesn’t always have to be cover—just a small change in bottom composition.”

If the unbearable summer heat and slow fishing action is frustrating you, don’t throw in the towel yet. Instead, pick up a squarebill and crank your heart out on these overlooked bass fishing hotspots. 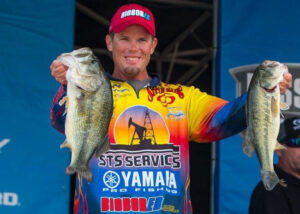