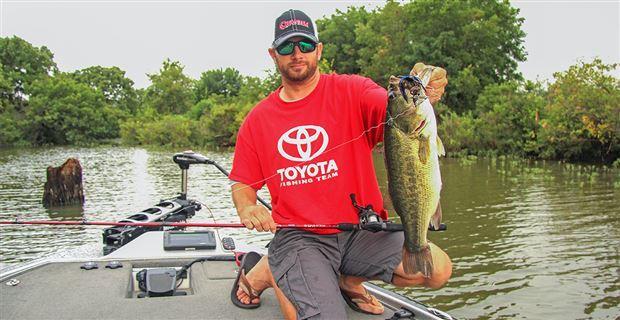 It grows just about anywhere and while even hardcore bass anglers often fail to know its name, what they know for sure is that from mid-spring through autumn it’s unequivocally one of the best shallow water largemouth habitats on the planet.

“When I see it, I immediately think about how many bass they catch out of it along the Coosa River on swim jigs,” said former Carhartt Bassmaster College Series Champ, Matt Lee of Alabama. “Year after year, swimming a 3/8-ounce jig with a bluegill-colored Strike King Menace as a trailer is one of the most reliable shallow water bites you can get on.”

While fisheries biology is his life’s work, B.A.S.S. Director of Conservation Gene Gilliland doesn’t hide his love of fishing around the widespread emergent shoreline vegetation either.

“I agree with Matt, swimming a jig through water willow is about as good as it gets in my book, and I swear its hardy enough to grow on concrete,” Gilliland said. “It’s about the only native aquatic plant I know of that can withstand extreme drought or flooding, and it stands strong against plant-eating fish and turtles too.”

Even in the heat of summer

A consistent qualifier for postseason regional tournaments, Mitchell Webb is among the very best of Oklahoma’s non-pro anglers. But Barry Switzer didn’t favor drop back passers and Webb’s not gonna fish deep; even when the Sooner State’s water surface temps are flirting with 90, so thank heavens for water willow.

“They’ll live in that stuff in two feet of water from the time it starts growing above the surface in April, all the way into the fall,” Webb said. “I’ll throw a 1/4-ounce swim jig with a lots of bluegill-colored skirt strands most of the time. But if it’s super thick, like it grows to be by August or September, I’ll switch to a heavier 3/8-ounce jig to gain a little bit of punching power when it’s really dense.”

While Webb, Lee and Gilliland all choose a swim jig as their first string starter, Webb also keeps a buzzbait handy.

“A lot of times you’ll spot an isolated piece of wood that’s washed in around the water willow or you’ll notice that the water willow grows out to form a subtle little point,” Webb said. “To me those are unique targets that are ideal for throwing a buzzbait.

“More times than not, the swim jig gets through water willow better than anything else, but if you can spot the ideal situation for a buzzbait mixed in, a lot of times your biggest bite of the day will come on it.”

Swim jigs are best thrown on braided line for a couple of reasons.

First, braid’s strength allows for easily getting your jig back when it inevitably gets snagged on the thick vegetation stalks. But it also allows for plenty of pulling power when a fat largemouth rolls on your jig and heads into the dense cover. 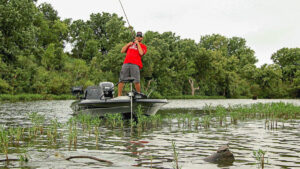 Spooling the braid to a high-speed casting reel such as a 8.1:1 Quantum Smoke Speed Freak allows you to easily keep the jig near the surface where most bites occur as you swim it along horizontally.

In regards to buzzbaits, don’t be afraid to go old school.

“Straight-up 20-pound Big Game is great for buzzbaits,” Webb said. “It’s the toughest, most inexpensive monofilament you can buy and it’s plenty good enough for casting a buzzbait.”