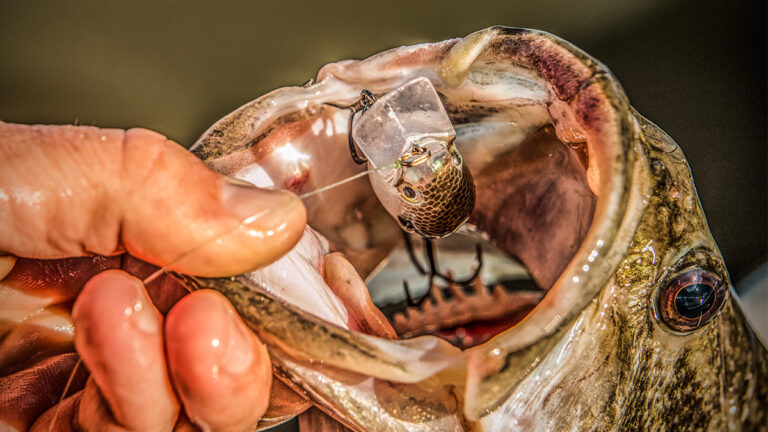 As the days get longer and Old Man Winter finally begins to loosen his grip on us, I’ve had so much success targeting secondary cover for big bass. The bass know it’s time to start staging for their annual spawn and each day they’re coming to the shallows by the hundreds. To make it even more fun, they’re fat and they’re the dumbest they’ll be all year when they make that initial push.

There’s one big problem with that around my area, however. Every single fisherman on the planet is on the water this time of year. It’s not quite as bad on the weekdays but my gosh, you could hardly park a tricycle at the boat ramp on the weekends. This increased fishing pressure results in a pretty quick decline in shallow bass fishing action after a week or two. These bass see every bait known to mankind in that small window and they get pretty wise to our tricks in a hurry.

I make an earnest attempt to avoid clichés in my articles but I have to say this: Big bass don’t get big by being dumb. When they sense all the fishing pressure and hear all that racket going on around them, I’m a firm believer that they can and will vacate those shallows and opt for secondary cover instead.

This is something I strongly suggest you try during the prespawn and even the spawn in your area. When the water temperatures are between 54 and 70 degrees, you can catch the biggest bass of your life running this pattern.

I’ll explain exactly what I’m talking about so you can unlock this special pattern on your local fisheries.

What the heck is secondary cover? 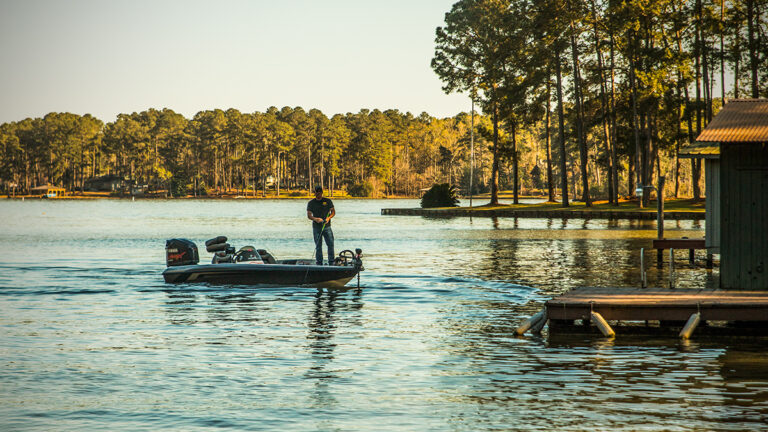 I feel like I might have totally made up this term. I don’t know how else to describe it, so I guess I’ll just stick with it. But here’s the deal about secondary cover.

As I mentioned, spring fishing pressure really jacks up the bass. Others may disagree with me but I’m a big believer that they’ll bolt if a bunch of folks are divebombing baits around ‘em all day long. Instead of fishing the obvious stuff you can see with your eyes such as boat docks, shoreline vegetation and the like, I like to fish the stuff in front of those things in just a bit deeper water—the kind of cover you can’t really see with the naked eye. I call that secondary cover.

Whether it’s a brush pile in front of a dock, a stump row 10 feet in front of a grass bed or a laydown that has rotted away from its stump and essentially slid down into deeper water, these hidden pieces of cover have an almost-unbelievable ability to attract and hold giant female bass throughout this time of year.

I started figuring this deal out when I was fishing tournaments a bunch several years ago. We have some huge tournaments around here and as you can imagine, it turns into a maddening game of “musical boats” after an hour or two. I’d ride into the creek I’d be wanting to fish and there would be bass boats on every single piece of good-looking shoreline cover; that’s absolutely no exaggeration. It felt like no matter where I fished, I was fishing behind someone and it drove me nuts.

Over time, I started to realize that all those bass boats were driving a lot of the bass nuts, too. In order to perform worth a crap in these tournaments, I felt like I needed to change up my gameplan.

Where most boats would be casting to the bank, I started looking for cover underneath where most boats were sitting, if that makes sense. So instead of fishing 2 to 4 feet of water like most folks were, I’d target stuff in the 6- to 10-foot zone.

This was long before the forward-looking sonar stuff out there these days, so I ended up finding most of my favorite secondary cover with either a medium-diving crankbait or a Carolina rig (gross, I know). And sure enough, I’ve probably caught 90 percent of the biggest bass of my life on these kinds of areas. 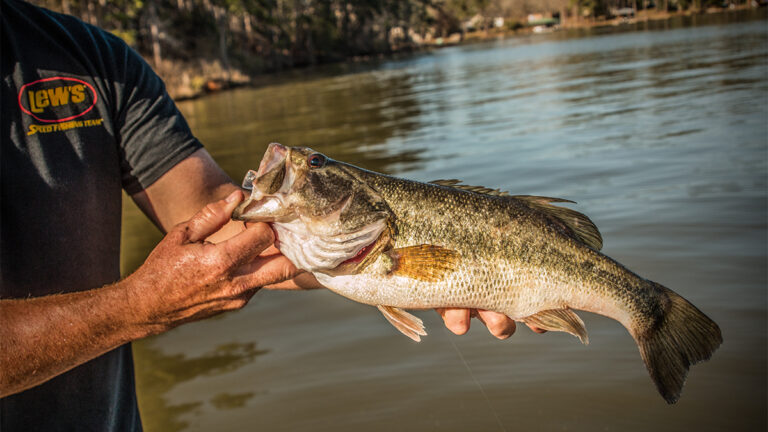 I’m not the most tech-savvy guy on the Wired2fish staff if you haven’t realized it by now. So I’m going to keep this section simple and talk about two things you can do without thousands of dollars in electronics.

As I mentioned earlier, a Carolina rig is a great way to find this type of cover. I like to use a 1/2-ounce tungsten weight because the density and hardness of the tungsten results in higher sensitivity for the angler. I’ll throw parallel to the fronts of docks, parallel to grass lines, to the sides of points and other small “knobs” or current breaks and drag that Carolina rig as slow as I can stand it.

It’s important to note that I’m not doing this to get bites. I’m simply using this old-school rig as a way to feel the bottom. When I come into contact with some type of bottom transition or hard cover, I make a mental note or a GPS waypoint and come back to it a few days later.

Another technique I’ve used a lot to locate this secondary cover is using a medium-diving crankbait on 10-pound fluorocarbon and a medium-action rod. The smaller-diameter line helps that crankbait dive deeper and the lighter-action rod helps me make longer casts and “search” more efficiently.

Now, you might actually catch some fish doing this but again, I’m not too worried about that while I’m in search mode. I’m making the exact same casts as I would with the Carolina rig and making notes of every deflection off hard cover I feel as the crankbait dredges the bottom.

Don’t get fancy with bait selection 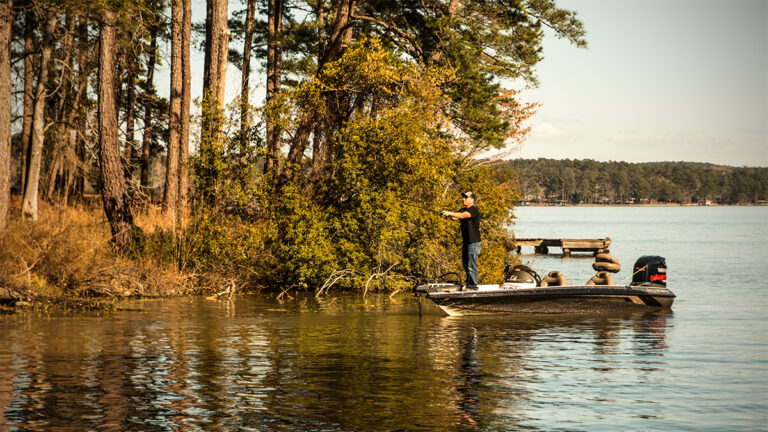 Can you pitch a jig or Texas rig to this kind of secondary cover and expect to catch fish? Heck yea, you can. But the biggest issue with that approach is the lack of efficiency. It’ll take you two months to fish everything you found if you’re too slow about it. Instead, I love a 4- to 6-foot diving crankbait, a jerkbait and at times, even a walking topwater lure.

Whichever of these baits you choose or feel most comfortable with, I can’t publish this article without emphasizing the sheer importance of making repeated casts. The fish on this secondary cover can be stubborn and in my own redneck opinion, I believe it’s because those big female bass strongly prefer to “own” a particular piece of cover and they tend to have smaller and more strategic feeding windows than the smaller buck bass. So there might be one 7-pounder on that secondary stump and she’s not there to eat; she could very well be inactive and simply adjusting to a recent temperature change or weather front. Even if she’s totally inactive, however, you can tick her off with repeated casts to make her attack your lure out of pure aggression. The biggest fish I’ve ever caught on my home lake took about a dozen identical casts to the same exact piece of cover before she bit my crankbait. It’s crazy how they get like that and I wish I had a concrete answer for it but honestly, I think this is the one time of year when stubbornness can do you a lot of good as an angler.

If you’re tired of playing musical boats on the weekends with hundreds of your peers, I challenge you to spend a few days locating secondary cover. As I mentioned, I have no idea if that’s the correct term for it, so let’s just roll with it. Keep things simple and keep looking for cover that most bass boats are hovering on top of as they beat the banks.

I firmly believe if you dedicate enough time to this pattern, you’ll unleash an entire population of big bass that most folks will never even mess with.