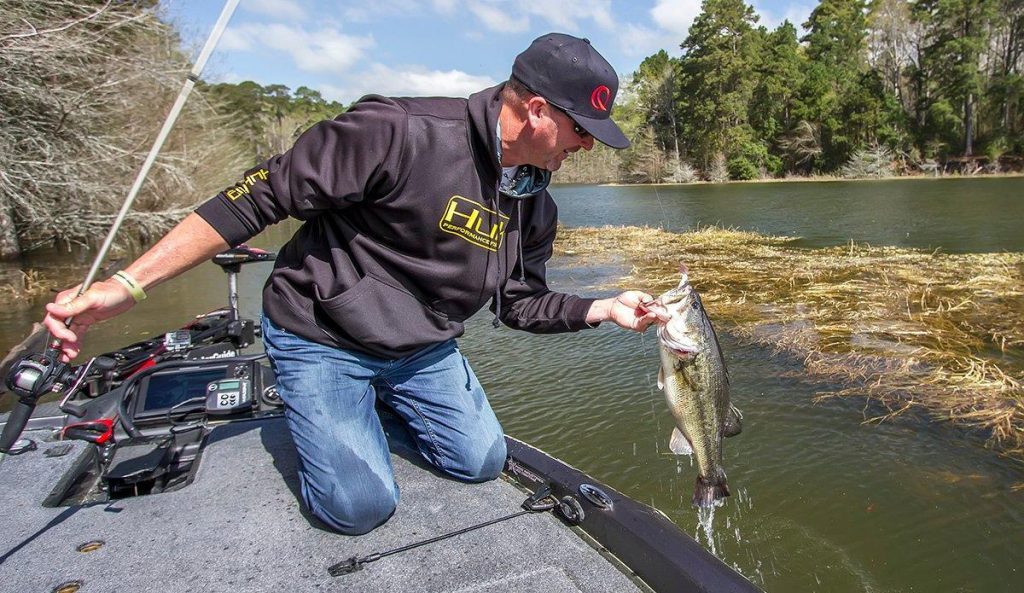 Hay grass — also called “Johnson grass” is considered an emergent vegetation, but you’ll often see established stalks laying over and taking on a mat-like appearance. Other stands will include stalks standing tall.

In any case, the hay grass hosts important seasonal intersections abounding with opportunity

WHY HAY GRASS IS RELEVANT

As Costa FLW Series Texas Division pro Nick Lebrun points out, thin-bellied female bass recently removed from the spawn have resting and feeding on their minds. They’ll soon start making their way toward their summer offshore haunts, but during this transitional time, the hay grass offers important habitat that fills the fish’s top two requirements — shelter and food.

Lauding the seclusion that a hay grass field provides, Lebrun said the presence of crawfish and other forage makes it easy for postspawners to lay about and eat at will.

His summation: “It’s like a hotel with an endless buffet.”

Toledo Bend guide Darold Gleason agrees and points out that hay grass can play a key role in a lake’s food chain.

“In Toledo Bend, we don’t have a lot of riprap or hard banks for the shad to spawn on, so the hay grass is a hard edge for the shad to hide in and do their thing,” Gleason said. “This is a great food source for post spawn bass.”

And just when the shad are wrapping up their love fest, the food truck makes a second round of deliveries that the hay loving largemouth just can’t resist.

“The other collision you have in addition to the shad spawn is your panfish are about to start doing their business. The hay gives your bream somewhere to hide, and the bass are right there too. So, it all runs together.”

Back to the habitat part for a moment, the hay’s expansive makeup, with all those little hiding spots, makes this a natural place for fry-guarding males to stash the young’ns while they’re figuring out the whole friend-foe thing.

WHICH HAY GRASS IS THE BEST

Widely distributed throughout the creeks and coves that bass utilize for their spring patterns, hay grass typically grows in 3-6 feet of water. It’s hard to pinpoint why some regions seem to sprout more of this vegetation than others, but pockets that have hay grass tend to have it in abundance.

That being said, finding more productive areas is akin to locating sweet spots on a summer ledge. You could run into the occasional bite here and there, but whittling down to the most promising sections necessitates time management.

“During the post spawn, I prefer hay grass that’s toward the main lake and not way back in a creek,” Gleason said. “It just seems like, as the water warms up in the backs of creeks, they get a little stagnant. So I like to be more toward the main lake where there’s more wind to keep the water cooler and oxygenated.”

It’s also important to narrow down the right spots within the hay. The grass often sprouts in and around buck brush, so this overlapping cover bodes well for bass, especially on sunny days.

Lebrun likes to see cypress trees adjacent to his hay, as this habitat feature can create interior lanes where bass often feed during the day’s early hours.

“If I was going down the lake and saw a stretch of hay grass that was 700 yards long, I would be drawn to wherever the points are,” Gleason said. “This just helps break it down for the angler.” 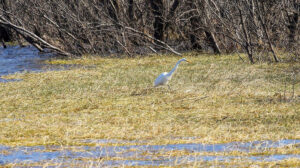 HOW TO FISH HAY GRASS FOR BASS

Hit ‘Em Hard: LeBrun likes to punch his hay grass with a V&M Wild Thang Craw. He wants that reaction bite, so he’ll go as heavy as 1 1/2-ounce weights, so he doesn’t have to wiggle a bait through the stubborn hay.

Walk the Line: During the first couple of morning hours, LeBrun works a frog through the open lanes between the hay and the bank, or between grass and cypress trees. Once sunlight intensifies, the fish will tuck into the cover, so capitalizing on this early perimeter feeding can kick start the day.

Chug It Up: Walking frogs will irritate those fry guarders, but a noisy, threatening popper (frog or hard bait) will send them into full-on kill mode.

Rude Intrusion: During shad spawns, and subsequent bream bedding, Gleason likes spinnerbaits and swim jigs. He’ll adjust bait colors to fit the respective forage and tailor his presentations to the mood of the moment.

“I’ll usually use the swim jig or the spinnerbait on the outside edge of the hay grass when it’s a little windy and I’ll work it higher in the water column when the fish are aggressive,” he said. “I’ll go to a topwater on more of a calm, still kind of day when you really want to get in there and work close to the edge.”

You’ll also dial up some post spawn action by tracing the hay grass perimeter with a Carolina rig. Everything from Senkos to Brush Hogs appeal to these transitioning bass, but Gleason notes that a Zoom Fluke can be a real sleeper in this application.

He likes a green pumpkin bait with the tail dyed chartreuse.

Lastly, don’t hesitate to go big and bold with an umbrella rig. These fish are in the mood to chew and heaving the weedless rigged version of the kitchen sink a few times can help you locate a bunch of bass in a hurry. 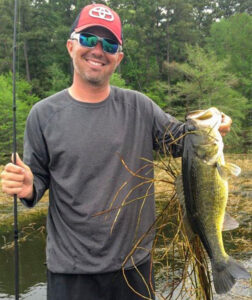