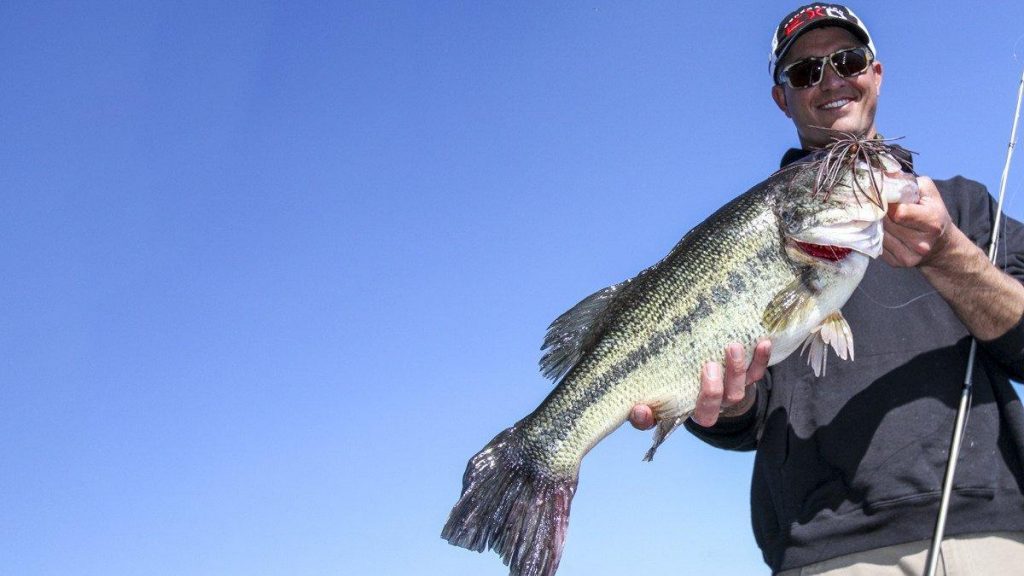 Ever watch male turkeys during their spring strutting rituals? Bent on attracting hens with impressive displays, gobblers proudly strut their stuff with one key objective – maximizing their profile.

Head back, wing tips dragging, tail fully fanned and feathers flared, the long beards figure bigger is better when it comes to wooing the gals. In a way, the same principle applies to mop style jigs for bass—sometimes, you just need to show the fish a puffed-up, flared-out profile. Buckeye Lures came up with the original Mop Jig and it broke into the mainstream fishing scene in 2006 after both Davy Hite and Anthony Gagliardi won major events on Clarks Hill and Lake Murray that year on the jig.

“I like a mop jig, especially in the post spawn (when the fish are moving out to deeper water),” Ashley said. “They don’t really want to move much, so when they eat, they want to eat something big.”

Ashley’s fellow Elite Series pro Kelley Jaye agrees, with this perspective: “No. 1, it’s a bigger profile and that attracts a bigger fish. When you’re tournament fishing, you only need five fish; so if I’m fishing for just a few bites, I prefer a mop jig.”

WHEN THE MOP’S TOPS

Ashley’s pretty efficient with whatever technique he’s using, but he also knows that transitioning from one spot to the next almost always leaves a margin of opportunity for those willing to salvage a few remaining bites. For this, he loves his mop jig.

“When I have a limit and want to catch a kicker fish off that spot, I’ll use a mop jig,” he said.

An effective clean-up bait no doubt; but know that the mop jig also earns its spot on the starting roster.

As Jaye points out, this bait’s most effective in warmer water when fish are more aggressive. He’ll actually start using this big-bass bait during the spawn for strategic bed-fishing presentations.

“I will catch bed fish on the mop jig, but I don’t use it only to (try and) catch them,” Jaye explained. “If you give a bed fish a big profile to look at and then you throw a smaller bait in there, they’ll eat it up. That mop jig can be an intimidator.”

Jaye also likes a mop jig in late spring when shad spawn around rip rap and wood. We typically think of moving baits like squarebills, swimbaits and spinnerbaits for this deal, but those amped-up, shad-chasing bass won’t hesitate to grab this enticing profile. This becomes more apparent as the shad spawn tapers off in the day’s increasing sunlight. 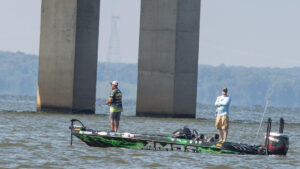 For summertime use, Jaye likes the mop for the following scenarios:

“I don’t like just throwing up shallow and pulling my bait out because that usually wastes about 75 percent of the cast,” Jaye said. “I’ll graph the spot to find out where the fish are sitting.

“Once I know how they’re relating to the structure, I’ll make long casts across the spot and keep my jig in the strike zone longer. A lot of times they’ll hit the pulsating action of that skirt on the fall, so I want to throw into them and then keep the bait in that strike zone longer.”

On points, Jaye hops his mop slightly—just enough to raise it off the bottom. This lets him maximize the open water by adding some vertical motion.

On ledges or drop-offs, a steady pull allows him to maintain bottom contact and deftly navigate around edges, brush, etc.

On river systems with stained water, he likes black and brown jigs, while green pumpkin gets the call in clear water. 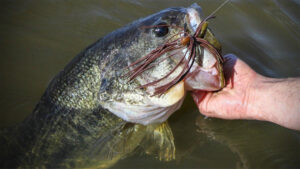 Using a 1/2-ounce Greenfish Tackle jig for most of his presentations, Jaye pairs that bait with a Yamamoto Twin Tail Grub trailer. During the spring through fall months, he likes some action on the tail end to complement that big skirt spread. For the occasional winter use – maybe a warming trend that activates fish in water that’s still pretty chilly – he’ll use a chunk style trailer for that slow fall he needs during this lethargic season.

For optimal appearance, Jaye trims his mop jig skirt from the bottom center outward. He wants to maintain the skirt’s overall length, while eliminating the unnatural looking uniformity.

“When I hold a jig up, I don’t want it to look like a perfect skirt – I want it to have some irregularities,” he said.

Ashley prefers a mop jig with square skirt strands, which tend to spread wider than round strands. As for rigging, he offers this suggestion: Before adding a Zoom Super Chunk, he’ll take an inch-long piece of discarded trick worm and thread that onto the shank of the jig’s hook. Serving as an impromptu spacer, the worm piece keeps the trailer from sliding up the hook and marring the presentation.

“If you make a long cast, or even if you’re skipping docks, this keeps you from making a wasted cast,” Ashley said. “If you’ve made a cast and gotten your bait back with the chunk balled up on the jig, you wasted a cast.”

“You don’t bring a knife to a gun fight – you go big or go home,” Ashley said of the beefy line. “And with that high gear ratio of 8:1, when you get a bite and a big fish dumps slack in your line, it allows you to catch up to the fish and get a hook in him.”