Prespawn bass become much easier to catch when they make their move towards shallow water. The females are also full of eggs, so they weigh much more than they normally would. It’s the best time of the entire year to catch a giant. That’s exactly why we’re taking the time to discuss this topic.

But what really makes them move shallow? We’re going to explore several theories in this piece.

Personally speaking, I’m convinced that length of day plays the biggest role in their annual shallow-water push. Much of my reasoning comes from my deer hunting background: Our rut occurs during the second week of November each year—give or take a few days—regardless of the weather. It happens every year, weather or moon phase be darned. It doesn’t matter if it’s 20 degrees or 80 degrees; the majority of our bucks start chasing does. Their biological instincts know that it’s time to do business.

We overthink it and try to turn it into an exact science.

I think bass are the same way. In my area, March is when the first major prespawn push occurs. Whether it’s 75 degrees or 45 degrees, the big females show up at the same time every year. It doesn’t seem to matter how cold or mild the winter was. Like any other wild animal, there’s something inside of a bass that tells them it’s time. That’s not to say that moon phase isn’t important as well, but I think length of day plays the biggest role in their initial prespawn move.

Some people agree with me and some think I’m wrong. So I reached out to some of the best anglers in the world to see what their theories are.

Why I called him: He’s one of the best shallow crankbait anglers on tour and prespawn is prime time for guys like John.

“I think it’s purely instinctual. They know the spawn is coming and they’re getting up there and putting the feed bag on. I’m also a big believer that it has a lot to do with crawfish. They come out of hibernation when water hits the 52 to 54-degree mark, so when the water gets to 50 degrees, the bass are up there waiting on them. That’s a big reason why crawfish-colored crankbaits are such major producers.

“Water temperature also plays a big role. I’ve seen certain years when it’s colder than normal and the fish are simply not shallow as early as they would normally be.”

When I asked him why crankbaits are such big-time producers in the early prespawn, his answer revolved largely around the element of unfamiliarity.

“These big females suspend in the middle of coves and in deeper water throughout the winter. They’ll go several months without seeing a single crankbait, so essentially, they’re totally unconditioned. When they move shallow and see a shallow plug, they absolutely wreck it.” 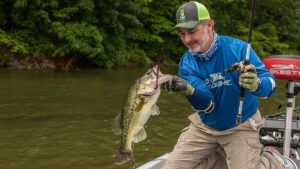 Why I called him: Mark has a degree in fisheries biology and he backs up his knowledge with an impressive on-the-water resume. I consult him frequently whenever I have biology-related questions.

“Photoperiod has a huge pull on these fish; I think that’s the number one thing that gets the big waves of prespawners into the shallows. I’ve seen thousands of fish pull up and spawn with the right photoperiod and a full moon, but with a terrible water temperature.

“We were at Lake Murray in February one year and the moon was right—we had a full moon coming—and the days were getting longer. But the water temperature was still 51 degrees. In one bay on the lower end, the giant bass showed up. I kid you not: In a 200 yard stretch I saw over 80 fish that were all 7 pounds or bigger. They were set up up for spawning, rubbing their bellies and everything.

“I also saw a similar thing on Clear Lake in California. The water temperature was 49 degrees—much colder than the 58 to 62-degree range it usually needs to be for spawning—and there were over 150 spawning fish in a creek. I am a firm believer that the biggest fish in a lake will always try to spawn first.

“Stained water helps hold warmer temperatures and clear water takes longer to warm. In clear water fisheries such as Lanier or Clarks Hill, you have fish that move shallow, but shallow is relative; they still might be 15 feet deep. The dirtier the water, the shallower it pushes them so they can have ample light penetration for their eggs to hatch.

“Here’s something else that will make you think: Why do daffodils only show up after the first week of February, regardless of weather? It’s all length of day. The internal clock of most organisms is based on photoperiod, and bass are no different.” 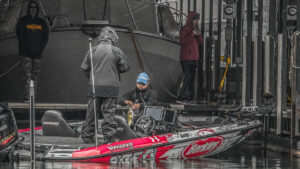 Why I called him: Justin is a very in-tune fisherman. He pays very close attention to small environmental variables and is an extremely versatile angler.

“My rule of thumb is pretty straightforward: If the water temperature is above the 46-degree mark, you’re going to start seeing movement towards shallow, hard cover. I like to get on riprap and wind a Berkley Square Bull crankbait. Combine that with a little stain in the water and it can be some of the best fishing you’ll experience all year.” 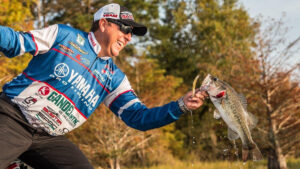 Why I called him: Dean’s knowledge of shallow bass fishing runs deep. He broke the record for the heaviest five-bass limit in B.A.S.S. history—45 pounds, 2 ounces—targeting spawning bass on Lake Tohopekaliga.

“Water temperature is a big thing. But perhaps even more important is a consistent weather pattern for three or four days; that will cause them to get shallow in a hurry. The ones staging on the secondary and primary points will slide back quickly. I disagree with the whole moon theory—if you have cold front they will not move up.

“A good example is when I was fortunate enough to weigh 45 pounds, 2 ounces when I broke the record. It had been cold for so long, but we had four or five warm days and they just flooded the bank overnight. There was no full moon in sight. I’ve also seen this happen on Santee Cooper as well.”

Why I called him: I’ve seen Brandon catch shallow prespawn fish—in the 3 to 6-foot range—in 43-degree water. He has an excellent grasp on when to target early prespawners and it seems like he often figures out this bite earlier than many anglers.

“I would think length of day is the biggest factor. I say that because I’ve seen it happen without the presence of bait. It’s something in their sensory system that makes them hard-wired to move shallow. A full moon certainly helps the cause as well. Regardless of the time of year, I believe fish push shallow during a full moon period.

“Questions like this are what make this sport so challenging. We can’t ask a bass why they do what they do. You can have the best mechanics and decades of experience, but you’ll never fully understand a bass.

“It also seems like highland-type reservoirs such as Cherokee, Hartwell and Grand allow for prespawners to push shallow much earlier than flatter and shallower fisheries. These type of lakes have several very important factors that make for an earlier shallow prespawn bite: Hard cover, red clay, rock and perhaps most importantly, verticality.

“In extreme temperatures, whether it’s hot or cold, fish will move very shallow but they need to have deep water nearby.”

That’s exactly what makes this topic so interesting. Each pro I talked to, all with lots of success at the highest levels, have slightly different theories. Like Palaniuk said, we’ll never have ‘em perfectly figured out, but this article gives us a lot to chew on as we approach the storied prespawn season.