What’s up? In this article, let’s just say the bass are. There are lots of ways to catch bass in the spring, but for some reason, the spinnerbait seems to have taken a backseat to swimbaits, Senkos, Chatterbaits and other trendy tackle. But several anglers still rely heavily on the spinnerbait for bass in the prespawn, spawn and post spawn periods of spring.

Elite Series pro Keith Combs employs a spinnerbait a lot in his fishing, and his experience on multiple fishing tours travelling the country, especially around Texas, has taught him some valuable input on spinnerbait applications around the bass spawn.

These simple tips will help you catch more spinnerbait bass in the spring:

“Prespawn  is easily my favorite time to throw a spinnerbait,” Combs said. “The big females suspend up in the water column to sun themselves in cold water. They’re not ready to spawn yet and generally I catch them best around standing timber or over other cover in stained water.”

The early spring bass tend to relate to cover but they are up in the water column. So many bass anglers will miss them fishing crankbaits and bottom bouncing baits like jigs. Those warming trends can really get big bass up higher in the water column.

“It’s not a numbers deal for me,” Combs said. “But it’s a 30-pound limit deal. You don’t get a bunch of bites fishing like this, but you get big ones.”

Combs runs his bait slow fishing it 5-8 feet down over 12-15 feet of water with standing timber on a lot of lakes he frequents all through Texas and various lakes across the country. The fish that come up and suspend in the tops of the trees will react to a big slow rolling spinnerbait. Combs likes a willow Colorado combination in a 3/4 ounce Strike King Hack Attack Heavy Cover spinnerbait.

Comparatively speaking, Combs reaches for a much smaller spinnerbait when the bass move to the beds. Most guys put the spinnerbait away when bass are on the beds, but Combs has found that big bed guarding bass will crush a 1/4-ounce Strike King Baby Burner Spinnerbait.

He targets heavy cover-laden banks and that 1/4 ounce burner and small blades pulls through and over cover easily. The spinnerbait gives him an advantage over flipping and pitching because he can target a lot of cover on a single cast and find active fish without even having to see them.

But he admits that spawn is still very situational for spinnerbaits. “I like those dark, cloudy days with some wind when they are bedding for using a spinnerbait. It’s a lot more effective when you can’t sight fish or flip well because of wind. “ 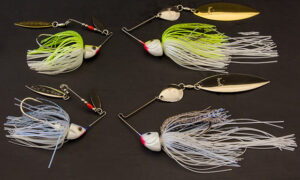 You want fries with that shake

There is definitely at time after the spawn when spinnerbaits produce well for Combs again – fry guarders. After the bass have guarded the nest and their offspring are hatched, they will spend more time lurking in the shallows seeking cover for the fry to hide as they watch and ward off fry eaters. This makes them vulnerable to a blade again.

Combs opts for a big blade in the post spawn. He likes a 1/2 ounce Hack Attack Heavy Cover spinnerbait with a big willow leaf blade on it. He’s purposely trying to get the fry around bushes and wood cover to scatter so he can draw the attention of momma. The round head of the Hack Attack spinnerbait comes through cover easily.

Another time when bass seemingly get “dumb” involves the spawning of their favorite bait fish. When Combs fishes lakes with shad, he will throw a blade on a fast retrieve and keep his bait up near the top.

“You know you’re in the right area when you feel shad bumping your blade all the way back to the boat,” Combs said. “I will work areas of hard bottoms, floating docks, shallow cover fast trying to draw shad to my bait and likewise bass.”

Because Combs has caught some big bass on Texas lakes and all over the country for that matter, he really beefs up his tackle when spinnerbait fishing around the spring spawn. He likes 25-pound Seaguar Abraz-X in the prespawn fishing wood cover and hoping to catch double digit bass around said cover. After the prespawn, he drops down to 20-pound Seaguar Tatsu.

He’ll use a stouter rod in the prespawn, choosing a Power Tackle PG144 rod because the fish are much bigger then. All the rest of the time he’ll use a Medium Heavy PG 143 Power Tackle rod with a 7.3:1 gear ratio reel. He likes the faster speed because those big fish swim fast and he needs to be able to take up a lot of line to get a good hookset as those fish notoriously seem to swim right at him at high speed.

The spinnerbait has become slightly passé in recent years, and Combs admitted he still switches to a vibrating jig or swim jig at times. He, however, always seems to end up back at the spinnerbait because he’s developed so much confidence in it as a big fish bait. He uses heavy line, strong rods and spinnerbaits with stout hooks because as he says, “It catches big ones in the spring.”