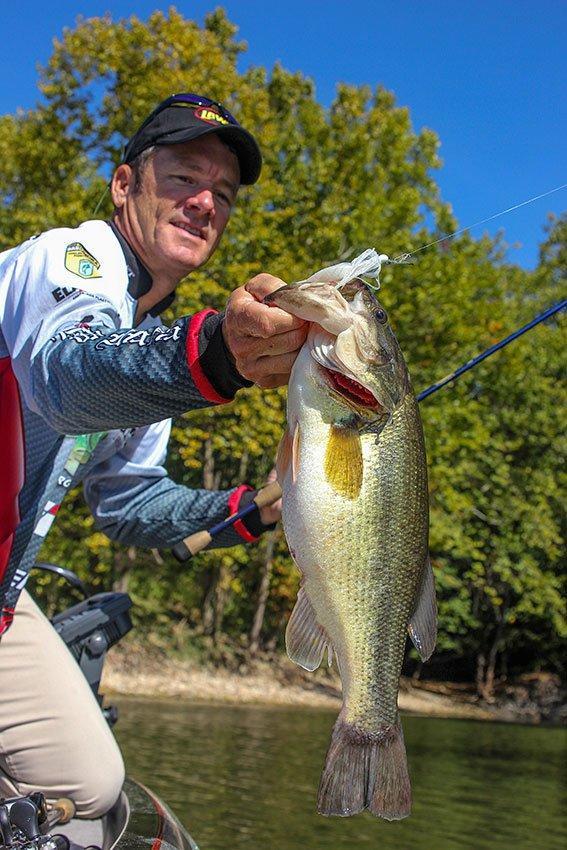 Many bass anglers look forward to spring bass fishing throughout the entire year. When spring finally arrives and bass begin roaming flats in search of warmer water and bedding areas, it gives us the ability to chase after them with a plethora of moving baits—the key word being “chase”.

Bass fishing flats isn’t as straight forward as it may sound. Instead of wandering around shallow water areas hoping to luckily intercept a big bass, LIVETARGET pro Stephen Browning considers 4 key elements that can turn an ordinary day into an extraordinary one.

In many fisheries, the majority of flats are adorned with some sort of depth change. Whether it is a small, 2-foot depth change or a large drain resulting from fluctuating water levels, Browning considers these small variations essential when dissecting flats. 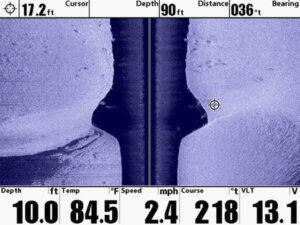 “You absolutely have to use your electronics to find the depth change—that is always my first step,” Browning said. “Start out at the very beginning of the flat and try to find a small drainage ditch that leads into it. You need to find the highway the fish are using to travel to and from the flat.”

He also makes it a point to monitor the bottom composition. Bass don’t prefer muck-covered bottoms, especially in the spring. As they prepare to spawn, they will be on the lookout for hard bottom areas, such as sand or gravel. Without a hard bottom, your search for big bass will be hindered.

His next order of business is finding any available cover on the flat such as stumps, rock piles or submerged vegetation. As he makes his way onto the flat, Browning uses a wide variety of search baits to simply feel for cover. Whenever he notices his bait deflect off of something, he takes advantage of his electronics.

“Every time I feel my bait hit something, I make sure to enter a waypoint on my graph,” Browning said. “This helps me fish more efficiently when I come back to it. Instead of bombing casts to low percentage areas, I’m able to pinpoint exactly what I’m casting to. Sure, bass will roam around on these flats and you can catch those fish, but they’d much rather be snugged-up to some type of cover.”

When he’s looking for productive bass fishing on flats, Browning has noticed two key conditions that are essential for his success—wind and direct sunlight. Although one or the other is sufficient for big bass, both of the conditions combined can lead to some huge catches.

“A really bright, sunny day really makes spring bass jump onto the flats,” Browning said. “They’re not always up there to feed, either. Most of the time they’re just searching for warm water.”

Wind is also critical as it churns the water and increases oxygen levels. Whenever there is an increase in the oxygen level, both the bass and baitfish become more active and easier to find.

“Catching fish on moving baits is always easier with wind,” Browning said. “It lets the bass use cover as a current break and ambush point. They’ll sit on the downwind side of a stump and just wait for a group of shad to get blown by. The fish get positioned better which makes them easier to pinpoint.” 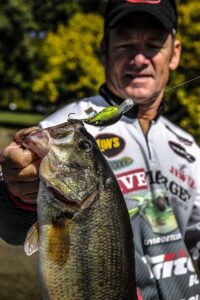 Regardless of the conditions, Browning usually begins his approach focused on the depth change. Even if it’s just a small depression in the middle of the flat, bass will use it as a travel route. Using this method, he’s noticed 2 presentations that work better than others.

“If the flat is laid out correctly, I really prefer to parallel any available break lines,” Browning said. “Even if the bass aren’t particularly active, they’ll slide off the flat and sit on those break lines.”

You’ll also find him throwing his bait onto the flat and retrieving it towards deeper water. For instance, if the average depth of the flat is 3 feet, it’s not uncommon to see his boat sitting in 6 to 8 feet of water. In a way, this gives him the best of both worlds.

“This presentation lets me make long casts onto the flat to pick off the more aggressive fish while also allowing me to target the more inactive fish that may be suspended along the break line,” Browning said. “It’s a good way to fish for two different types of fish.”

Timing is a big deal

Many of us consider early spring mornings to be the best time to draw a strike from a big bass. While Browning doesn’t necessarily disagree, he’s found flats to be most productive during a totally different timeframe.

“Early in the morning is good, but the early afternoon is the prime time for targeting flats,” Browning said. “During the springtime, that’s usually the warmest period of the day, which is when the bass will flock to these areas. If I’m fishing during the spring and notice my temperature gauge bump up a couple degrees, you can bet I’ll be headed towards a nearby flat.”

If he fishes a flat thoroughly without getting a quality bite, Browning doesn’t just give up on it. Many times, after letting the area rest for an hour or two, he’ll revisit it. Bass move onto flats in short spurts throughout the day, so never get discouraged if you have a slow start.

“Ideally, I want to find several places where I can establish a pattern and rotate areas throughout the day,” Browning said. “You may only get one bite at a time, but more times than not it’s a big bite. If you have enough areas, you can have a fat sack at the end of the day.”

When you’re on the water this spring, don’t just pass by those light blue areas on your GPS map. Flats offer some of the best fishing of the spring and if you follow Browning’s advice, you’ll probably end up using a few more “sick” days than anticipated. 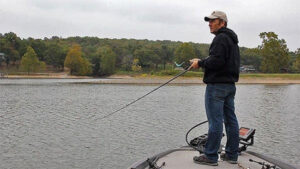