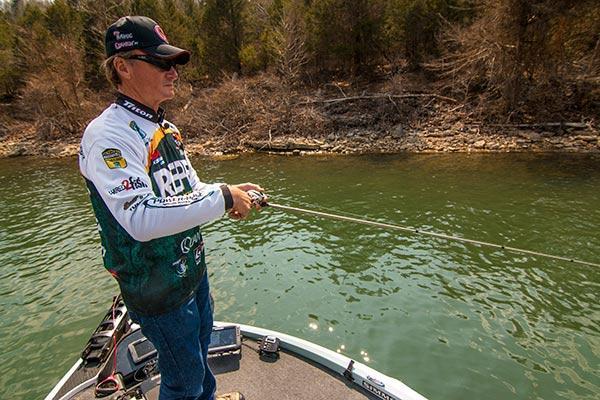 I ran over to Table Rock for the final day of the 2014 Elite Series event on the lake. It was great to see my friend Mike McClelland take home the trophy on his home lake, but the buzz around the weigh-in was how much of the field was sticking plastics on the back of the swing head jigs like the now infamous Gene Larew Hardheads with a Biffle Bug.

I have spent some time fishing with Tommy Biffle and we’ve shared a feature and several videos related to how he employs the swing heads with his famous Biffle Bug. This is not to say that it’s limited to this. These heads were originally designed for fishing in a combination of rock and grass up in the northeast part of the country. But they have since been adapted into other techniques.

What I found fascinating was the guys on Table Rock were fishing them like crankbaits in clear water. When it got slick calm and even when it was windy, the bass bit these jighead and plastics when nothing else seemed to trigger a bite.

Mark Davis probably got the technique the most notoriety at this event for his second-place finish using the setup with a Strike King Menace Grub when he talked about catching 30-50 keepers on it in areas where others had just fished with crankbaits.

The common complaint I hear about these swing head and plastic combinations is that guys fish them a while, don’t get any bites, put it down and write it off. I think with new approaches to lures, you find that it takes time to determine the situations where it excels. Lures are tools, and they don’t work in all conditions and situations.

Well maybe we can shortcut that learning curve for you with the advice of three pros and our own personal experiences with swing head jigs.

Here are four things we found in our discussions that anglers should consider when fishing swing jigs:

Calm and clear is not all bad anymore

It’s fairly well known that when bass want to be shallow on very clear water fisheries, wind and overcast skies will make bass fishing easier. The wind breaks up the profile of your lure and allows the bass to forage shallower without being so spooky. Overcast and dark days seem to also be better for many of the same reasons.

When the water gets slack and the skies are bright, a bass can be seen from a long ways away. And they know it. A crankbait and a spinnerbait suddenly become way to overbearing, and the bass are more reluctant. Those lures quite frankly don’t look as natural as they did on those dark windy days when the water was turbulent.

What if you had a real natural presentation you could crank along?

The swing heads with a plastic with subtle flapping undulating motions really excel in these conditions. You wind it along steadily feeling it bump and tick the rocks along the bottom. It transmits the type of bottom you’re fishing, and it maintains bottom contact really well. If you lose contact, stop reeling. If you’re digging too hard, speed up. It’s like having a crankbait that runs in 0 feet or 20 feet equally well.

But it looks natural, and that, to me, is everything in that gin clear water that we sometimes face when fishing for somewhat skittish bass.

The real allure of the bait to me is it is equally effective in deep water as it is in a foot of water. You might change your head size from say 3/8 or 1/2 ounce in relatively shallow to moderately deep water up to 3/4 ounce heads for really deep ledges, humps and other offshore spots.

“You basically get on a bank and figure out what depth the fish are using and then you just sort of cast at angles through those depths, keeping the bait bumping along on a steady retrieve,” said legendary professional angler and noted tinkerer, Gary Klein.

“We were making these swing heads at FishBoss.com, and I was telling Mark Davis about them. He got a bunch of them and took them to Ouachita Lake near his house and got acclimated to using them in clear water. Everyone saw what he did with them on Table Rock Lake. I like the 3-Inch Berkley Havoc Pit Boss on mine. ”

The biggest key to Klein is when you lose bottom contact, stop reeling, let the bait get back to the bottom and then start again and try to feel the lure bumping occasionally. That bumping is the trigger for the bite.

Anglers will find learning to fish the rig somewhat difficult if they are waiting to feel a hard “thunk” at the end of their line when a fish bites.

“You will think you picked up a leaf most of the time,” Klein said. “When I feel that, I start winding a little faster and then as you feel the rod load, then I set into the fish. If you wait to feel that hard bite you will feel a lot of fish ‘let go’ that you never knew you had on the line.”

I found this to be the biggest learning curve. I have dabbled with the rig off and on, but after watching Klein, VanDam, Davis, Swindle and several other pros throw their favorite flapping plastics on the back of swing heads, I realized I need to invest time in it on my lake.

Swing Head Combinations of the Pros

One thing Tommy Biffle told me early on was to use a stiff rod. I didn’t understand that until I started getting bit on this rig myself. When you feel that just sort of mushy heavy feeling wind the reel handle a little faster and begin leaning into them. As you feel the fish presence, you go ahead and swing. Problem comes when you reel and lean and the rod continues to flex, your hooking power goes down.

I don’t want to throw it on a flipping stick per se, but I like a heavy-power, fast-action, 7-foot rod and a high-speed reel.

Klein fished his on a Quantum Medium Heavy action EXO rod and a Quantum 7:1 Tour MG 100 reel with 15-pound Berkley Professional Grade fluorocarbon line. That’s a nice thing about this crankbait alternative is you can crank it in 10 feet of water on 15 to 20-pound line.

The swing jig system has several advantages over catching those same bass on a crankbait. Here are just a few of those in my own experiences:

I like the solid hookup you get with a single big hook.You can cast it a mile in a straight 25-mph wind.It maintains bottom contact just by stopping.The fish will hold on to it for several seconds usually.The angler can use heavier lines with it.You can burn it in shallower water for reaction bite.Changing colors and size is quick and easy without retying.

Shared thoughts on the swing head

“I thought I had this deal somewhat to myself after Bull Shoals last year,” said Gerald Swindle. “I actually am working on a head with Booyah that won’t swing but has the right hook in it. With a Zoom Z-Hog Jr on the back of it, you can wreck the smallmouth and spotted bass as well as largemouth in clear reservoirs like in the Ozarks. And it catches big ones too.”

“It’s a neat deal,” Kevin VanDam said. “I use this cool interchangeable head from Mustad called a Fast-Tach Head. With it I can put a bigger hook on it for bigger profile plastics in dirty water and a smaller hook for smaller plastics in real clear water. It gives you something for when the conditions are tough or when it’s flat calm and clear water. You can fish it like a jig but I usually just fish it like a crankbait.”