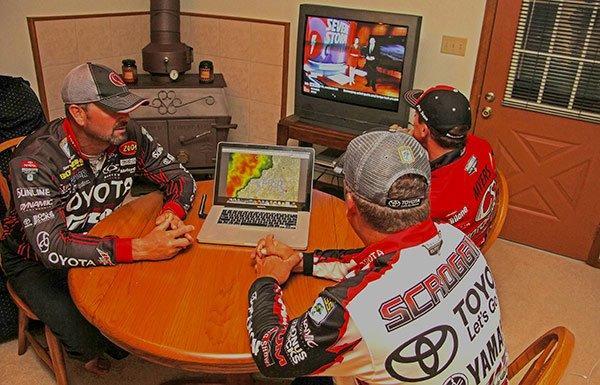 As much as discussion centered on the importance of getting one good bite to separate yourself from the super-tight pack of 10 to 13-pound limits, wise minds were on the weather.

Rightfully so, because while Myers, Swindle and Scroggins chewed on the cheeseburgers that Gerald’s wife LeAnn grilled for them, warm, humid, 75-degree air was violently being replaced by the 40-degree air and gusty north breezes that are greeting them on Day Two at Table Rock.

“Is the weather gonna hurt you or help you tomorrow?” was the $100,000 question posed by emcee Dave Mercer at one point during the day one weigh-in, and frankly it may be the single most important factor that affects anglers of all levels, no matter the entry fee they pay or even the species they pursue.

Here are four fishing weather conditions, and how these pros approach them:

When Warm Air is Replaced by Much Colder Temps

“No matter if the air temp is rising or falling, you better be paying attention to the wind direction,” says Swindle. “In other words, if it’s gusting from the north instead of the south, plan on fishing the shoreline opposite of what you did the day before,” says the Quantum pro. “Way too many anglers make the mistake of going right back to the same stretch of shoreline they caught ’em on yesterday â€“ and if the wind ain’t there â€“ you’re probably not going to catch ’em.”

Swindle adds that the presence of wind is absolutely critical to getting bit on clear water lakes like Table Rock.

“When clouds are replaced by sun, you need to be making tighter casts,” says Swindle. “Sun is going to push bass tighter to the bluff wall, tighter to the boat dock, tighter to that boulder, tighter to that laydown â€“ and you better be making casts that are precise enough to put your lure in those tight places because the bass are far less likely to run out and chase a lackadaisical cast like you might have scored with under clouds the previous day.”

When the wind stops blowing

While Swindle warns to chase the wind, especially on a clear water reservoir, sometimes there’s very little wind to chase, and that’s when his roommate Scroggins reaches for a spinning reel. “If it slicks off, you’d better be picking up that shaky head, drop shot or stuffing a ¼ ounce shaky head inside a tube or Gitzit,” says Scroggins, who recently launched his own cooking blog on Bassmaster.com.

What to do when storms bring lightning and super high winds

Britt Myers still speaks with a tone of fear and humility from memories of high wind waves that once took away his bravado and outboard motor. “The winds got so big at a BFL tournament I fished years ago on Santee Cooper that the pounding jerked my outboard off the boat. It was hanging by the cables,” recounted a humble Myers.

“You wanna fish like a pro? â€“ Then use the common sense the Good Lord gave you and seek shelter when huge winds and lightning roll in,” says Swindle adamantly. “I’d sure hate to get killed by lightning on Friday, knowing that I had a chance to go fishing Saturday and Sunday.”