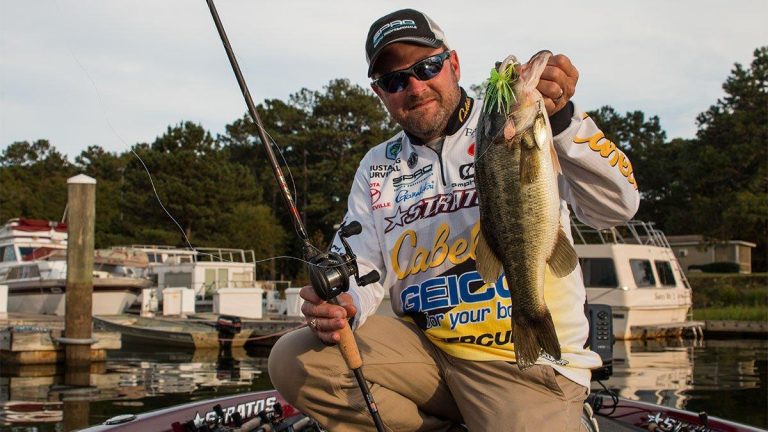 Over the past half-decade or so, spinnerbaits have ominously fallen out of favor with many anglers. With the recent influx of new and innovative bass fishing lures, this traditional favorite is slowly being nudged to the proverbial backburner of our tackle collections. But be warned; this trend may very well be costing us countless fish catches throughout the spring months.

Elite Series pro Mike McClelland is a steadfast believer in the effectiveness of spinnerbaits. In fact, he believes these lures to be among the most effective imaginable when targeting boat docks during all three stages of the spring spawning period. When the water temperatures reach the 50 to 55-degree range, be ready for some of the best spinnerbait action of the entire year.

Arbitrarily casting these lures to boat docks, however, doesn’t always cut it. In order to maximize both your effectiveness and efficiency, there are a number of critical aspects to consider. 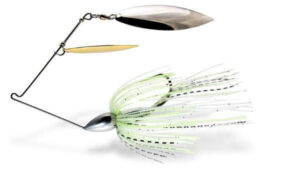 You can certainly enjoy success using today’s more trendy lure categories throughout the entire spawning period, but let’s not forget the importance of familiarity. McClelland believes bass become quickly accustomed to what he calls the “springtime norms” such as swimbaits and squarebill crankbaits.

“Big female bass are not as dumb as we’d like to think,” McClelland said. “After seeing hundreds, if not thousands, of the same ol’ lures each weekend, I’m convinced they’re becoming conditioned to them. That’s why, in my opinion, spinnerbaits are so incredibly effective in the spring. The fish rarely see them anymore, so they’re more apt to mistake them as natural forage.”

According to McClelland, there are two primary reasons why spinnerbaits are often overlooked. Understanding these factors is important to becoming a more well-rounded blade angler.

With all of the theories and postulation out of the way, let’s get down to the very essence of spring spinnerbait fishing. We’ll first refer to a popular cliché we’ve all heard since grade school.

The first two words of that phrase are critical in terms of spinnerbait fishing. The early spring is notorious for being a season filled with heavy precipitation events, which results in stained waters in many of our local fisheries. The resulting decrease in visibility forces bass to rely more heavily on their lateral lines, making spinnerbaits incredibly difficult to beat.

“With the right blade combination, a spinnerbait can produce a tremendous amount of vibration which is a major deal in dingy water,” McClelland said. “Big Indiana or Colorado blades thump throughout the entire retrieve, which allows the bass to track them down and attack them easily.”

In addition to their intense vibration, these lures are also extremely versatile for several reasons.

Boat docks are a one-stop shop 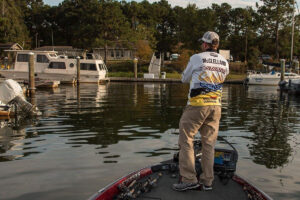 If you were placed on a totally unfamiliar lake with one hour to catch a bass, where would you start? If you’d begin by dissecting any boat docks in the immediate vicinity, you’re not alone. It’s engrained in an fisherman’s DNA—docks hold bass. But why?

The prespawn period is one of the best times to catch a trophy bass. They’ve just endured a long winter, they’re at their heaviest, they’re hungry and their biological clocks are screaming at them to begin their annual shallow-water migration. If you’re able to identify the “right” docks, you’ll have a remarkable chance of catching a giant. 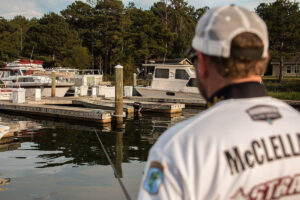 When most anglers think of spawning bass, visions of soft plastic baits and topwater lures flood their minds. While these are certainly viable options, spinnerbaits are incredible locator tools when you’re targeting bedding fish in muddy water. Even if you’re not able to catch the bass, it allows you to cover water quickly and trick bass into protectively “snapping” at the bait which gives up their exact location. 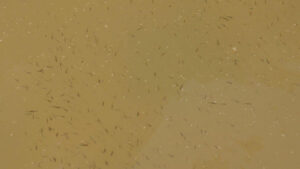 When the shallow-water romance of the spawn subsides, the bass fishing can become a bit tricky, to say the least. The male, or “buck” bass hang back and guard newly hatched bass, or “fry” while the females recharge and try to enjoy a little alone time. This obstinate behavior, however, is remedied by late-spring shad spawns and spinnerbaits become an even bigger player. 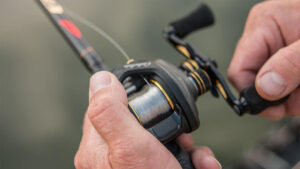 Using proper gear can make your life a lot easier when targeting springtime docks with spinnerbaits. You might be able to get away with wimpy gear for a few fish catches, but you’re likely setting yourself up for a potential heartbreak.

With that being said, power is a major factor when McClelland rigs up for a day of spinnerbait fishing.

If you’ve fallen out of love with your spinnerbait collection in recent years, don’t be afraid to dust ‘em off this spring. When you combine strategically placed docks with the flash and vibration of a spinnerbait, some amazing things can happen.