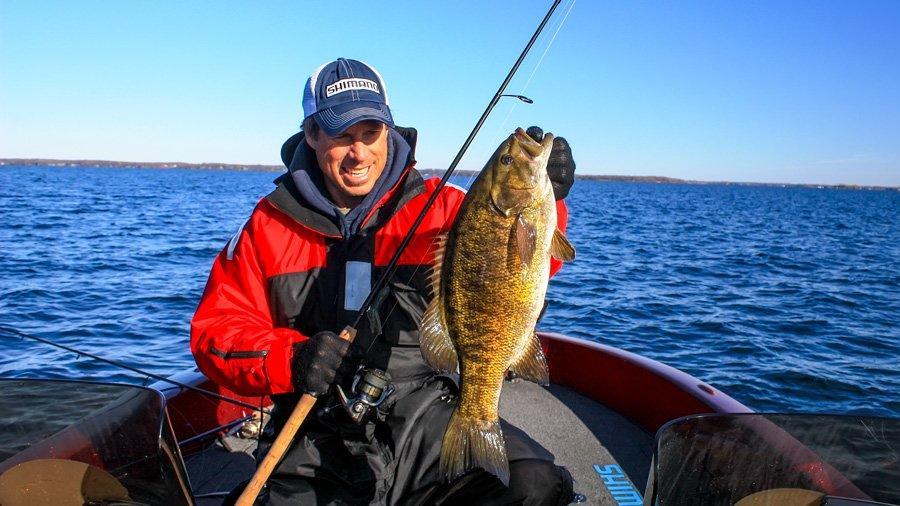 The prespawn period is one of the best times to catch a trophy smallmouth bass, and Lake Erie’s a top destination for big bronzebacks. Consistently successful anglers understand how prespawn bass move from deep wintering areas to massive shallow spawning bays and flats, which can be miles wide on the Great Lakes.

As such, electronics are essential for locating fish on these vast expanses, and then fine-tuning boat position to hug structure edges where giant smallmouth lurk. Once found, jigs and plastics, metal baits and jerkbaits all have their time and place for catching prespawn smallies.

For 20 years, smallmouth open-water specialist and 2010 Canadian Open Champion, Derek Strub (www.nationalprostaff.com/users/61/Derek++Strub) of Elora, ON., has fished prespawn smallmouth in Lake Erie’s eastern waters off of Pennsylvania and New York. By keeping detailed records, he’s refined his prespawn strategies to specifically target trophy fish. Here are the 4 parts of his system:

“Spring is the only time of year when we know exactly where smallmouth bass are headed,” Strub said. “We know they have to move from deep to shallow.”

As with other lakes, smallmouth prespawn locations vary as the water temperatures increase in spring. Bass move from deep, soft-bottom wintering areas onto structures acting as rest stops and travel routes on their way to shallow, spawning sites. But, on Lake Erie, the spawn migration occurs on a massive scale. Huge numbers of smallmouth are coming from deep flats and pushing towards colossal shoreline bays and flats. As an example, Strub’s biggest Lake Erie smallmouth, a 7-pound, 1-ounce brute, was caught within a “bay” roughly 4 miles wide between its points.

“None of this happens to all the fish all at once,” Strub said. “There will be one main push to spawn, and there will be males that race-up shallow early, but there’s going to be two to three main movements each spring.”

Strub searches based on water temperature.

The following are 4 temp-driven smallmouth movements he’s observed on Erie:

42 to 45 degrees – Smallmouth are moving from deep, mud flats where they’ve spent the winter and are collecting on transition areas. Strub focuses on bottom composition changes where mud gives way to rock or sand in 30 to 40 feet. In other areas comprised mostly of rock, fish move up to the first significant outside ledge or drop.

“During my early trips in April on Erie, we’re catching a lot of fish with mud stuck on their bellies,” Strub said. “They’ve actually be laying in the mud in winter. Anywhere there’s clay mixed in with the mud, it gets stuck to them.”

46 to 49 degrees – Deep edges, ledges and bottom transitions, like where sand meets broken rock or gravel, concentrate smallmouth. Fish relate to these edges as they push towards spawning bays. Strub often fishes 20 to 30 feet.

50 to 54 degrees – Smallmouth hold on the last outside edge leading into spawning bays and flats. Strub frequently fishes Erie’s ancient shoreline break found in 12 to 15 of water at this time.

“Smallmouth come in, they bump into it, and they sit off it anywhere from 10 to 20 feet from the edge out, relating to bottom,” Strub said.

55 to 60 degrees – As the full moon approaches, smallmouth move to shallow, spawning flats. Strub’s observed this often occurs around mid May on eastern Erie.

Strub doesn’t pursue smallmouth scattered on flats or the actual spawning bass. Instead, he focuses on late-to-the-party smallmouth relating to defined edges in front of spawning bays. These edges tend to be subtle and may only be a drop of a foot or two.

“For me, spring is trophy season,” Strub said. “I’m looking for giant prespawn smallmouth and I’m looking for numbers where I have a better chance of getting those big fish.” 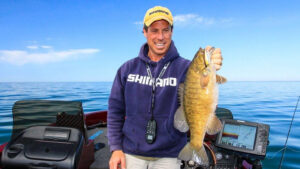 Knowing prespawn smallmouth stall and collect around bottom transitions and breaks is one thing. Pinpointing the areas holding herds of smallmouth over miles of open-water and fishing these spots with precision is another game entirely. To do so, Strub’s relies on his Humminbird units to locate smallmouth, while the i-Pilot Link system and his Minn Kota Terrova trolling motor are used to maintain precise boat position along edges.

Start with 2D sonar – “All of these transitions I’m fishing are usually found on color sonar while moving on plane,” Strub said.

See fish – Slowing down, Humminbird’s Side Imaging is used to fine-tune and waypoint the transitions, while a color sonar is used to locate large concentrations of smallmouth along these edges.

Fine tuning – Prespawn smallmouth hug edges. Being off by a boat length can reduce the number of fish dramatically. Strub uses Humminbird’s 360 Imaging to look forward and see direction changes along the edge, tweaking boat position with his Terrova accordingly to ensure his rig is always where it should be as he cruises between waypoints.

Accurate casts – Using 360 to spy ahead, Strub’s casts to high-percentage spots. Precision’s a big advantage when up against sluggish or spawn-focused smallmouths.

Staying on fish – When Strub finds a pack of smallmouths, he uses i-Pilot’s Spot-Lock to hover in place and work the fish. In Erie’s wavy, open-water conditions, he finds this feature indispensable.

Cruise edges – When it’s time to move on, he’ll either work the Terrova manually, or use i-Pilot Link’s navigational features, such as custom routes, iTracks and Cruise Control, to follow a fish-holding edge at a precise speed. Also, using the record track feature when drifting, Strub’s able to go back upwind and then replicate the successful drift within 10 feet. 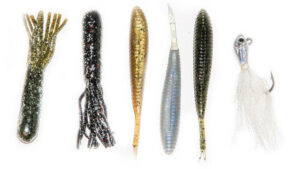 Jig early – “I use baits that don’t have a lot of action and fish them slowly, meandering them along the bottom,” Strub said. “The big thing is maintaining bottom contact. Get them down and keep them down.”

“Bites can be incredibly light in these temperature, so the PowerPro braid is a must to feel those deep light pick ups,” Strub said.

“It might only be a slow, 6-inch lift off bottom when the water’s 45, but we get into a pretty aggressive snap when the waters aaproach 50,” Strub said.

Wrap-up with jerkbaits – Late prespawn smallmouth are generally tough to catch, but a lazy retrieve with a jerkbait is irresistible to bronzebacks. Strub uses the Jackall Squad Minnow 115 or Squirrel 79 in Super Shad, Tennessee Shad and Clown.

“When smallmouth get up and are sitting on those 13 to 15 foot edges, that’s when we start casting baits and working each side of that edge,” Strub said. “It’s tap-tap, and then 45 seconds pause. We fish really slow jerkbaits and catch giants, but it’s a very painstaking way to fish. They aren’t chasing it, but if you kill it, they will eventually swim up, eat it and turn. On a calm day, when conditions are right, this technique will catch giants.” 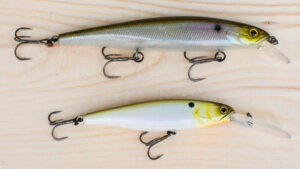 Anglers must be extremely cautious on the Great Lakes in spring. Falling into cold and cool water is a life threatening mistake and rarely are there many boats around to assist you. Strub wears a survival suit when water’s under 50 degrees and when the lake’s rough.

“All of these giant rivers that empty into the Great Lakes in April and May are spewing horrendous amounts of debris, so this is not for the faint of heart,” Strub said. “If you’re driving out there in the spring you need to be very, very cautious of what’s ahead of you. Massive stumps, 50-foot trees, we’re talking about big nasties.”

Early spring, when waters are in the high 30s and low 40s, remaining ice is also a hazard. Ice can be very hard to see.

“In rough water you have to be twice as cautious,” Strub said. “Driver and passenger should both always be looking. I have a Triton 215X Walleye boat, so I’m able to stand for better visibility.”

Consider Derek Strub’s approach for big, prespawn smallmouth on Lake Erie and other Great Lakes. Use sonar to sniff-out concentrations of bass, and carry a range of baits to appeal to the many moods of prespawn smallmouth. And above all else, be safe. 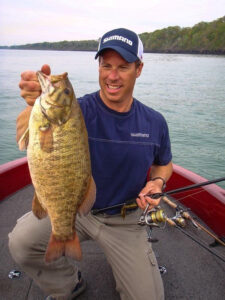