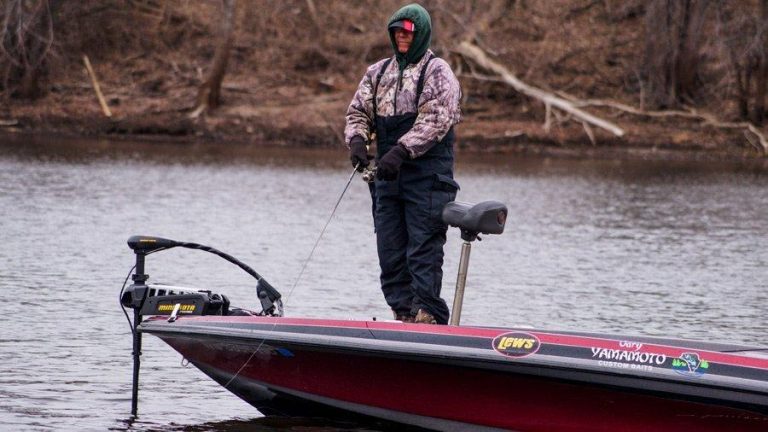 It gets really cold in the northern part of the country. So cold even the river systems freeze up. No open water access forces anglers to bring a drill, ice shack, and heater to merely wet a line.

It can be brutal.

Fortunately for northern anglers, those brutal winters eventually give way to spring, a time when northern bass are very willing to bite; usually as soon as the ice comes off.

“Ice out is one of the most under-fished times of the season on northern rivers like the Upper Mississippi,” Monsoor said. “The bass have been sitting under that ice all winter waiting for the first signs of a warm up. Once the ice comes off and the sun can reach the water, it’s game on for big ones. The water might still be cold, but it’s the best time of the year to catch a giant.”

IT STARTS UNDER THE ICE

In river systems like the Upper Mississippi, bass winter in backwater lakes, ponds, marinas, and deep holes out of the current, and they actually become active while there’s still ice over their heads.

“Everything drains naturally into a river system,” Monsoor said. “If you get a couple warm days in a row, meltwater that’s a couple degrees warmer than the main river will start to enter the system. There will still be ice on the backwaters, but the bass become much more aggressive. It’s around this time every year that ice anglers will randomly start catching more bass.”

The influx of meltwater is also the largest factor in melting the ice, something that happens a lot faster on river systems than on lakes because of the presence of current. The current works with the warmer meltwater to eat away the ice sheet, quickly opening the system up to anglers.

CUE ON SIGNS OF LIFE

Because every spring is different, it’s not possible to use a specific date to indicate when the ice out bite starts to heat up. Instead, look for natural indicators that winter has loosened its grasp on the landscape.

“I look for blackbirds singing, the trees starting to bud out and grass  greening,” Monsoor said. “Depending on how harsh the winter is, the ice may come off any time within a three to four week window. Some years it may be mid-to-late March around the upper Mississippi, and other years it may not be until late April.”

Unlike many other early season bites, the ice out bite on rivers is also not as dependent on a specific temperature. Instead, look for an increasing temperature trend combined with sunshine.

“If it’s been a long winter, the bass will sometimes feed like gangbusters the first sunny day with a water temperature still in the upper 30s,” Monsoor said. “In other years, the ice will come out more gradually and the best bite is when it’s in the high 40s. In general though, anglers should focus on having a rising temperature, somewhere in the low 40s to low 50s.” 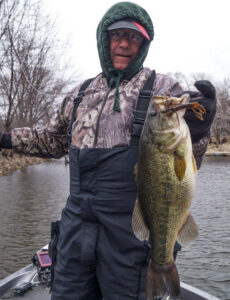 Most northern river systems feature both largemouth and smallmouth, and the Upper Mississippi is no exception. The ice out period offers great opportunities for both, but each species acts a little differently when spring finally rolls around.

In addition to warming water, the ice out period brings with it increased water levels, as the system swells with meltwater from upstream. For ice out largemouth, the key is to follow the rise of the river.

“Largemouth predominantly winter in backwater lakes and sloughs,” Monsoor said. “Once the ice is off, the water will start coming up and that will push them up with it. I like to target the backs of sloughs in the dead reeds and pads from the previous year, in flooded timber up against steep banks, and anywhere they can get out of the current.”

In years with serious floods, the waters may get high enough to make the bass almost inaccessible.

“They’re gonna keep going up with it, no matter how high it gets,” Monsoor said. “If it gets into the trees, they’ll follow it all the way back to where you can’t even get a boat to them.”

Although the rising level of the river also affects river smallmouth at ice out, the effect is secondary in that it will change the specific locations they hold, not what they’re looking for. That’s because the dominant factor in ice out smallmouth location is current.

“Smallmouth in river systems are going to relate to current 99 percent of the year, and the ice out period is no different, “Monsoor said. “The only thing that changes is how they relate to it. In the ice out period, the water is still too cold for them to be right in the current, so they will be sitting right on the edge.”

Places like rock points, wing dams, big laydowns and channel markers all offer the type of current break that ice out river smallmouth need, while still being close to current so they can dart out and ambush any baitfish the current brings by.

Although ice out largemouth and smallmouth may hang in different locations, they are both susceptible to a jig, a hall-of-fame weapon for cold water bass.

“Jigs are my number one presentation for catching ice out bass of both species,” Monsoor said. “They are versatile enough that you can fish them in 1 foot of water just as easily as 10 feet. You can also fish them effectively at a slow and deliberate pace, which is necessary when the water is still cold.”

The predominant forage item for ice out bass is crawfish, and because of that jigs in browns, green pumpkin, and orange should be primary color choices.

Monsoor most commonly fishes either a 1/4 or 3/8-ounce hand-poured casting jig. He fishes the jig on a 7-foot, medium-power Lew’s Speed Stick paired to a 6.4:1 Lew’s BB-1 reel spooled with 15-pound Sugoi fluorocarbon.

Whether you’re flipping a jig to largemouth in the bushes or dragging for smallmouth on rocky points, the period immediately after the ice comes off a river can be some of the best fishing of the year. The bass are trying to recover after a long winter, and have no choice but to feed. There’s nothing like the thump of a big bass to warm you up on a cold, crisp spring morning. 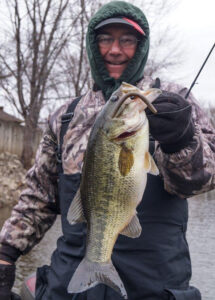