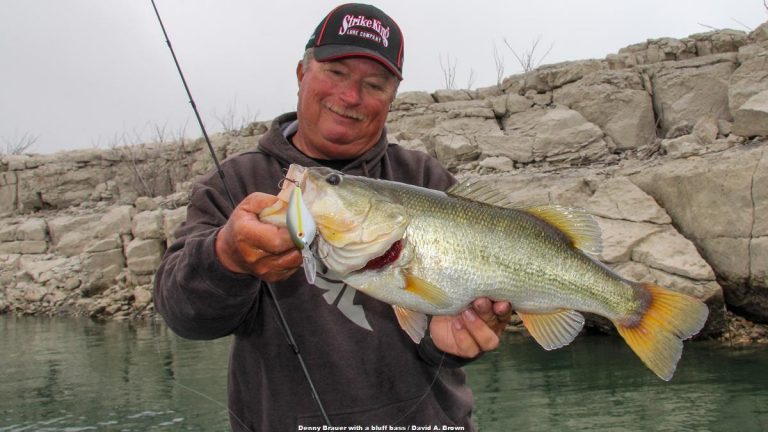 You’ll have no easy go at trying to read the “tells,” anticipate the moves and calculate the probabilities against Denny Brauer. But we’re not talking about that kind of bluffing. In fact, the legendary angler has no reservations about showing his cards when it comes to fishing bluff banks for bass.

A revered shallow water flipping guru for much of his decorated career on the Bassmaster Elite Series, Brauer has become equally enamored and accomplished with offshore structure fishing and the deep water abutting the bluffs.

The former Bassmaster Classic champion likes spring and fall for prime bluff action, but if there is a scenario with year-round potential for, at least some measure of bass relation, bluffs are it. An easy call when the weather’s nice and the bait’s active, bluffs are also offer key benefits during the depths of winter, while summer offers its share of rock wall rallies, as well.

Florida’s Terry Scroggins also shares an affinity for bluffs. In his view, bluffs see their seasons of big-fish abundance, but during the dog days of summer, they can offer a much-needed safety valve.

“A bluff is not usually a tournament-winning pattern this time of year, but it’ll keep you out of trouble,” he said. “If I can’t find (a productive pattern), I’ll go to those bluff ends because it seems I can always generate bites that way.” 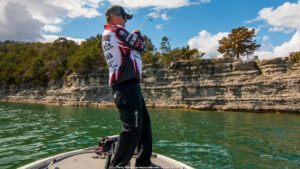 The overall bluff attraction comes down to a handful of key elements that all fish like. They want to put their backsides against something solid, they like temperature moderation â€“ warmer or cooler, depending on prevailing conditions â€“ and they want to find something to eat.

From Brauer’s perspective, bluffs do a fine job on all counts.

“Normally the main attraction is deep water access so the fish can move vertically very fast to get to one depth or another,” Brauer said. “Bluffs offer shade and they offer a place where bass can trap bait. But the biggest thing they offer is that steep drop that fish like to go to in extreme weather of summertime and wintertime.

“In spring and fall, the fish that have been using those bluffs (in the winter and summer) will start to congregate on the points of the bluffs where they start to tail out. Those can be key spots.”

For Scroggins, a key feature is the nearly instant gratification they offer fish â€“ at least, in terms of creature comfort.

As he explains, it’s kinda like a self-controlled elevator with quick access to whatever a bass needs.

“They’ll move up and down on the wall, depending on their feeding times,” he said. “They can go down and suspend over deep water or they can pull up shallow and feed on the bluff.”

Likewise, a fish needn’t greatly alter its proximity to the actual bluff wall to significantly change water depths. As Scroggins points out, a linear move of maybe 20 feet could take a bass from three feet to 50 feet.

“Instead of having to swim 30-40 yards up onto a flat to find warmer water, fish on a bluff wall only have to rise maybe 10 feet along a bluff wall to find the water temperature they like.”

Spring through fall, Scroggins looks for his better bluff bites in the early mornings. Baitfish rise to warming sunlight and bass follow them up to feed. Of course, all conjecture is subject to a bass’ appetite.

“If they’re on a bluff with current blowing by it, they’ll stay up there and feed longer,” Scroggins said. “You just have to fish the conditions.” 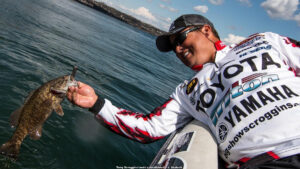 Brauer, who lived much of his adult life on Lake of the Ozarks, finds that fish generally spread along the bluff walls during the harshness of winter and summer. It may appear to be random scattering, but he points to a couple of specific features as fish magnets.

“There will be key places along the bluff, like a rock slide or a crack,” Brauer said. “Cracks are something that a lot of people don’t pay attention to, especially on the limestone bluffs. Where you have a crack, 10-15 down below the water, you can have a cave, a big hole or a shelf.”

In terms of fish attraction, Brauer likes rock slides because they provide a natural stopping point where fish gather. It’s a change in bottom makeup, a depth differential and a habitat feature that tends to hold crawfish and bait.

“I remember on Lake of the Ozarks, during the wintertime, I had several bluffs that were my most consistent spots and wherever there a rockslide gave the fish something a little bit different, that’s where I’d always catch my better fish,” Brauer said. “It became a pattern that I could run bluff to bluff.

“Now, on Lake Amistad, we have tremendous bluffs and the cracks are very important. But every now and then, you’ll still have the occasional rockslide to offer something different; or a shelf that comes out down below the surface.”

“It may all look the same to a lot of people, but once you start fishing bluffs and you learn to pick out those little bitty things, those can be the focal points where those bass are going to stack. You really want to pay attention when you get a bite and ask yourself ‘Was there anything different about that section of the bluff where the bite came from?'”

Echoing that thought, Scroggins treats a bluff wall like an offshore ledge and keys in on any irregularities such as distinct turns and notches and the tapering bluff ends. Laydowns are always worth a little extra time.

Now, not all of your best bluff spots will be marked with a “cast here” sigh. In fact, some may not be visible at all.

Case in point: When Brauer’s fishing Amistad bluffs, he’s typically looking at the towering walls upon which whitetails, coatimundi, and Barbary sheep roam. But during a late-February trip, he caught a bunch of quality fish suspended over subsurface bluffs.

These hidden sweet spots hold the same attraction as emergent walls; you just have to go looking for them. For this, Brauer relies heavily on the side-imaging of his Humminbird 1199 and a Lakemaster chip, which provides in-depth detail on contour features. Surveying every facet of the wall, he’ll look with the same scrutiny he’d apply when flipping a stretch of bank. 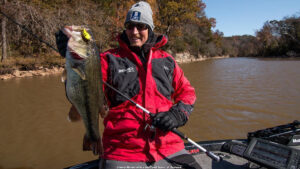 During the cold season and anytime bass suspend along bluffs, jerkbaits can work wonders. Bait size and cadence have a lot to do with where the fish are holding in the water column and how active they are on a given day. Experimenting with different looks and retrieves will dial in a consistent plan.

During the warmer months, Brauer and Scroggins both like to take a varied approach to their bluffs. For the morning topwater bite, Scroggins will fish a Heddon One Knocker Spook or a Booyah Buzzbait along the rock wall.

Strategy note: Given their height and their angle to the sun, bluffs on the lake’s east side can extend that surface action for several hours past daybreak by maintaining a shadow pocket longer than flat banks.

Other productive bluff offerings include slow rolling a spinnerbait, dredging an umbrella rig and tracing the rock face with a crankbait, swim jig or bladed jig. With any bluff bait, effective presentations require pulling in close and working parallel to the wall. Contrasting a more limited perpendicular presentation, parallel casts keep your bait in the strike zone longer.

Brauer’s favorite bluff deal: Fishing a summer day with a 3/4-ounce Strike King football jig and a Rage Chunk fished on 15-pound fluorocarbon. Casting tight to the wall, he lets the bait free fall and expects a sudden impact.

“The fish will utilize that shade of the bluff during the summertime, so I’ll try to hit the bluffs on the part of the day when they’ll have that shade and the fish will get tight to the wall,” Brauer said. “They won’t let that bait get to the bottom.

“It may be 70-80 feet deep on that bluff, but I’m not catching them down on the bottom that time of year; I’m catching them suspended 15-20 feet down. It’ll be some of the most awesome jig bites you’ll ever get. I mean that line will just jump. They’re usually those big quality fish.” 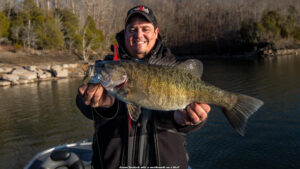 “That was the only time I really tore ’em up at the bottom of these deep bluffs,” Brauer said. “Keep in mind that the majority of your bites, no matter what bait you use, are going to be from suspended fish.”