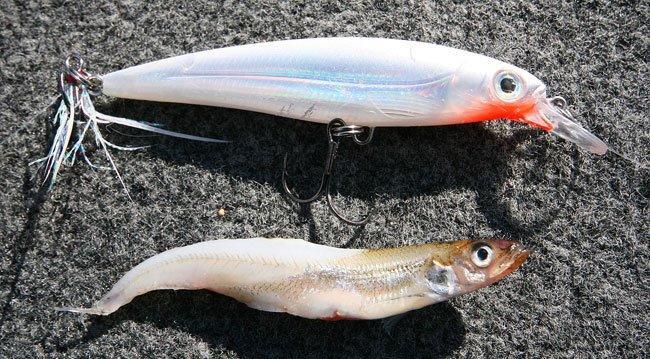 Please melt, ice. That’s a common phrase we’ve seen typed by anglers on Facebook lately. Fishing in the northern tiers is about to make an annual shift from house and tent to boat and bank. As the ice melts, the shanties and augers will go to the shed as the boats and tackle boxes are organized for spring fishing.

In places where bass fishing is allowed around ice out, many folks find themselves a bit stumped on where to start. Fortunately in those same northern tiers there are consistent anglers who’ve proven certain strategies really work when the ice disappears and the bass reappear. Quite frankly, not many folks target bass under the ice, so you’re talking about fish that haven’t been tempted and teased for many months – making them more willing to take a lure if you get it around one.

One of the fascinating aspects of fishing is that it is local, regional and national. What we mean by that is certain patterns, techniques, even colors seem to work on a national level, while specific techniques and colors seem to work regionally and yet you can even more narrowly define certain baits, colors and techniques that really slay the fish on just a local fishery. Many of the techniques that work on Kentucky Lake don’t necessarily work on Lake Champlain or Mille Lacs.

We talked with a well known Canadian angler who knows as much about ice out strategies on natural lakes as probably anyone in bass fishing. Jeff Gustafson, aka Gussy among his fishing friends, is one of the top anglers in Ontario and the northern US. He’s won several major events in Canada including the Kenora Bass International and International Falls Bass Championship. He’s a regular guide for fishing and hunting in Ontario and also hosts a Canadian television show Fishing with Gussy.

He’s bringing his talents south this year in the FLW Tour Opens, finishing 20th in his very first FLW Tour Open tournament one Lake Okeechobee, his very first time on the lake. No doubt his natural lake experience was a big factor there as many pros with 10 years of fishing down there, still don’t have Okeechobee figured out.

But back home, he’s still guiding for fish under ice and already chomping at the bit to get started on some ice out bass fishing.

“I think the ice-out period offers anglers some of the best fishing of the year,” Gustafson said. “For a week or so after the ice goes out the smallmouth are really schooled up in large groups. Think of all the bass from a 4 or 5 mile stretch of shoreline grouped up on a single structural element. The largemouth in contrast will go shallow, looking for the warmer dark-bottomed water they can find on our natural lakes. When you find these spots you can literally catch 100 fish in a day.”

In natural lakes up north, targeting smallmouths or largemouths are much more independent situations than on highland reservoirs and river impoundments of the south. It seems on those natural lakes they have very little crossover on the places they frequent during the ice out stages and you often have to style your game plan and techniques and tactics around one or the other.

Gussy offered his wisdom in both respects and it was apparent he’s developed a sweet tooth for big schools of smallmouths offshore during ice out. Initially he’ll start deep and then work shallow as the season progresses. But generally he starts 20 to 30 feet deep checking likely places like the flat at the end of an extended point or off the sides of humps. But what he regularly finds is smallmouths that have been waiting all winter for the ice to melt to put on the feedbags and gorge themselves. So, the fish are hungry and vicious. As the water warms a little, the fish will move quickly to the shallows.

“A key forage for us this time of year is smelt,” Gustafson said. “For that reason, we focus on long slender 3 to 5-inch baits.”

For the deeper smallmouths, his bait of choice is a jighead with a minnow style plastic on it like a Zoom Fluke. He pitches them and fishes them vertically or in short horizontal presentations just off the bottom around the big groups of smallmouths. He prefers a Northland Mimic Minnow jighead in either 1/4 or 3/8 ounce depending on if he’s going 20 or 30 feet deep. He likes a 4-inch Impulse Mimic Minnow or a 5-inch Trigger X Minnow. He experiments with a drop shot some too but feels he gets a more natural presentation in the depths with the jighead approach.

His approach is very methodical for the deep smallmouth. He doesn’t just cast blindly. He uses his Humminbird 1198 to pinpoint fish on the bottom. Then he drops his jig and minnow to the bottom and stops it just before it gets on the fish. He watches on the sonar and then just as he sees his bait nearing the fish on the bottom, he stops it. The cat and mouse game works wonders for starving smallmouths.

“It’s sort of like if you crash the jig into the bottom, you tip the fish off that something is up,” he said. “You have to be sure it never touches bottom. The fish are looking up for their food. You have to hold it as still as possible. Just get it to their level and don’t jig it up and down. They come up and crush it.”

After the water starts to warm up, the smallmouths bolt for the shallows. This is when he really whacks the fish on a jerkbait. He believes a suspending jerkbait out-fishes every other presentation in the small window from ice-out to prespawn. Because the water is cold though he’s again real methodical and slow in his approach.

He works the bait quickly down a few feet and then throws long pauses into the presentation. His favorite bait hands down is a No. 10 Rapala X-Rap jerkbait.

“The X-Rap is so easy to use,” he said. “It runs perfect out of the box. Casts well. Suspends perfectly.”

This is a real feast or famine time of the year for smallmouths and Gussy’s advice is simple. If you’re not catching fish, move. They are not going to be everywhere. You are looking for those places where the fish want to be connected to some sort of structure – a point, a hump, a saddle, boulder slide, etc. You run the high percentage areas and eventually you’re going to find the fish foraging in an area. Again there will be spots on a certain area that will be cast after cast of fish fighting action. That’s what you’re looking for. So if you’re not catching fish, it’s on to the next area that offers feeding and structure opportunities.

Largemouths on natural lakes seem to take on a totally different personality than their brown brethren in the ice out period. Instead of grouping up deep they seem to rush right to the shallows looking for the warmest sun soaked bottoms in the lake. The weeds are obviously dead this time of year, but typically those weed covered bottoms will be black and dark and radiate more heat than other sandy parts of the lake.

Gustafson looks for depressions, ditches, troughs and slight depth changes that offer them some travel routes and safe havens when the weather changes. He’s also hoping for warmer and sunny days as that tends to increase the ice out bass’s feeding and activity levels. Likewise afternoons are better than mornings as the warmest waters will be found late in the day after longer periods of sun.

Baits like the Senko are a top choice for largemouths roaming the shallows of these clear natural lakes of the north. Gustafson prefers a Northland Impulse Dip-Stick in black, watermelon, watermelon red or other natural popular colors. He wacky rigs the soft stickbaits on 2/0 Gamakatsu Wide Gap Finesse hooks. It’s a deadly combination for clean, shallow water.

But more importantly he likes to fish the bait on 20-pound yellow Power Pro braid with a 12-pound fluoro leader.

“I started using the yellow braid last year and it really pays off with certain techniques like this,” Gussy said. “More than 90 percent of your bites on soft stickbaits come on the initial fall, and it’s like having a strike indicator with that yellow braid because you’ll see your line jump when one bites. You want the bait to sink on completely slack line, so you won’t feel the bite. You have to see it on your line.”

He uses a 7-foot, 1-inch GLX Senko rod from G.Loomis and a Shimano Sustain spinning reel.

The only time he changes his ice out approach for largemouths is during those cold front days. This causes the bass to back off the shallow bays and move to the first little change to deeper water out from the bays. There he will use finesse crankbaits like a Rapala Shad Rap. But his absolute favorite is a DT3 Flat. He will target those depressions and subtle breaks where the largemouths seem to stack on those nasty cold days.

“I have nearly worn the paint off some of my crankbaits on some of the nasty days during the ice out period,” he said. “On lakes like Lake of the Woods or Rainy Lake, you can just crush the bass with this technique. It’s amazing how deadly crankbaits are for largemouth when they pull back and get in this mood in the north country. Yet still a lot of people don’t use crankbaits for bass in the ice out period. But I’m not complaining!”