I always liked the Independence Day fireworks shows. Huge explosions send sparkling jewels racing through the sky with a chorus of “oohs and ahhs” resounding from the amazed below.

Beautiful as they are, these shimmering eruptions are short-lived, so you don’t want to be late to the show.

That’s a lot like the annual shad spawn. Nature unleashes frantic flurries of reproductive priority and, in doing so, creates explosive opportunities for bass and the anglers that seek them.

Bassmaster Elite Series pro Terry Scroggins points out that the shad spawn is perfectly timed to follow the bass spawn with a highly available food source. Bass define opportunism, so they won’t miss the sounds and vibrations of a large scale baitfish love fest.

“It’s really easy to take advantage of the situation,” Scroggins said. “When you find spawning shad, the bass are going to be grouped up in schools.”

Suffice it to say, those who find spawning shad, find loads of bass engaged in a full-on food mood.

Shad need something solid to which their eggs can adhere, so a lot of the manmade structures found along shorelines offer ideal spawning areas. Marinas with all their sea walls, piers and floating docks offer extensive surface area for the shad to stretch out and do their thing.

Other less considered spots to find shad spawning include the following:

Bridges – The riprap anchoring approach causeways offers lengthy stretches of hard surface. Target the shady sides and know that leeward areas will be most productive. Scroggins said he expects to find the most consistent activity near the base of the bridge where it links to the causeway.

Grass Lines – In western Louisiana, Darold Gleason guides on big-bass powerhouse Toledo Bend—a lake with all the usual shoreline habitat, as well as dense offshore grass lines. Gleason said he looks for the freshest grass he can find, as the firmer surface best appeals to spawning shad.

Flooded bank grass, needle grass, pencil reeds, tules – just about any vegetation with a solid surface will play in the shad spawn. Grass lines coming out to points are particularly promising and put a few cypress or cedar trees on the end and that makes for one nice maternity ward.

With any of these habitat options, Scroggins generally targets the front ends of main lake creeks.

“The bass want to move out (of the spawning pockets),” Scroggins said. “They’re post spawn, and they want to feed again. The shad spawn is a prime opportunity for them to do that.”

Consider that stiff winds might render an otherwise attractive area too rough for the shad. On the other hand, a light breeze helps break up the surface and that’s always a good thing for those seeking to fool feeding fish.

If there’s any bummer about the frenetic activity that is a shad spawn, it’s the short duration. The deal happens mostly around the big moon phases and the way those shad move in and move out each morning, you’d think they’re renting the place by the hour.

“The shad spawn always happens first thing in the morning in low-light conditions,” Scroggins said. “This gets the bass feeding early because the food train is coming through in the morning.”

No doubt, if you get a late start and roll up anytime after the sun’s full emergence, you’ve missed some valuable fishing time. But get to your spot by daybreak, and it’s game on.

“Anytime you’re dealing with low light, it’s easier to catch fish because it’s easier to fool them with whatever bait you want to use,” Scroggins said. “So it’s a prime opportunity to catch a lot of numbers and also catch big fish.” 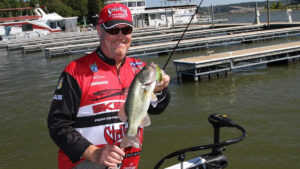 If ever there was textbook example of match-the-hatch, the shad spawn is it. Think flash-and-dash and you’ll be good to go. Now, some baits have more flash and some more dash, but the bottom line is that bass are chowing on little shiny shards abounding with energy, so… you get the picture.

Will bass eat a dropshot bait during a shad spawn? Okay, maybe. But why waste this intense period of hot-hand opportunity with a speculative offering?

This is not finesse time – this is make it happen time.

Putzing around with something light and non-intrusive bait is like that one kid waving a sparkler during the fireworks show. Any random glances quickly dissolve into “whatever” from everyone else focused on the sky show.

Takeaway: Don’t be a putz; throw something that looks and/or sounds like a spawning shad.

Spinnerbaits are one of the top-tier shad spawn offering because blending that flash, vibration and bulky profile with water-covering efficiency makes it tough to beat. Don’t overthink the colors – basic shad looks fare best and you definitely want willow leaf blades on this deal.

Elite Series pro Gerald Swindle is a big fan of white and silver, but whatever he throws, he’ll rig a trailer hook to snare the short strikers and the near misses.

And though some might scoff, Gleason said the Alabama rig is a bona fide shad spawn sweetheart.

“I’ll throw this over the tops of grass lines,” he said. “You need about 3 feet or more to fish an Alabama rig over the grass. With less water over the grass, I’d throw a spinnerbait.”

A big fan of tracing dock edges and bumping the wood every few feet, Elite Series pro Mark Davis likes swimming a Strike King Caffeine Shad, or cranking the zone with a shad color Strike King KVD 1.5 square bill. He’ll try multiple casting angles until he gets a fix on where the shad are concentrating.

Work those surface baits at a peppy pace and don’t pause. Think about it: If you’re a shad and the big heads are circling, would you stand still?

A few closing points to boost your shad spawn success:

Low Light Lingers – Overcast mornings will extend the shad spawn by keeping light penetration at bay. Similarly, Scroggins suggests starting on the west bank and then transition to the east bank once the rising sun erases the shadows. Chasing that shade on the east side might give you enough time to tempt a few more.

­Listen for It – Once you’ve located a shad spawn, the sound is unmistakable – kind of like rain on the water, but with much greater intensity. From a distance, those shimmering showers can lead you to the party. All you have to do is pay attention and follow the signal.

“What I’ll do is pull into a pocket, shut down my motor and just listen, as I drift,” said FLW Tour pro J.T. Kenney. “When those shad are spawning in the morning, you’ll hear them flipping and splashing.”

Spin Cycle – Not sure if there are any shad spawning in your area? Run a spinnerbait past the likely spots and see if any silver figures rise to chase those willow leaf blades.

Under Wraps – Between uses, collapsing the arms of an A-rig will help prevent deck hazards during what can be a busy morning bite. Velcro-sealing rig wraps offer an efficient option, but for simplicity, a pipe cleaner or similar twistable device affords a quick binding method. Gleason keeps his A-rig under control by cinching a zip tie to the rig’s head, snipping off the tag end and sliding the binder over the rig’s arms when it’s not in use.