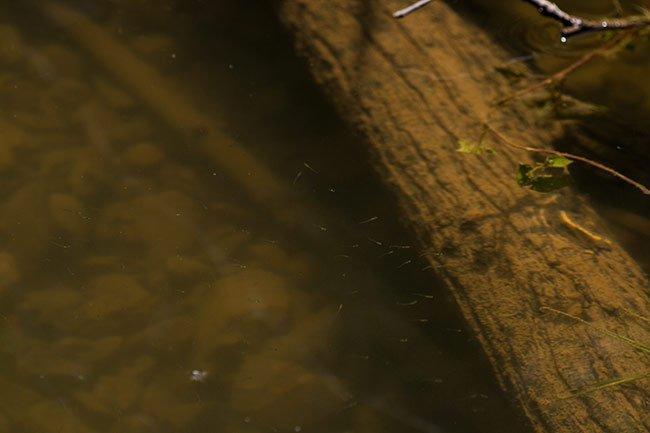 But these windows of change can often make the bass more predictable from year to year. It’s also the ability to recognize when one window is closing and another one is opening that separates the highly successful professional angler from every other angler.

The spawn creates those situations where the bass movements, behavior and locations can be predicted almost prognosticated from year to year. They are going to stage, feed and get fat. They are going to move to flatter, more protected area to nest and mate. They are then going to take their young and guard them until they reach a sustainable size. Then the bass will move off to their summer haunts on the main lake.

That period however when the bass leave their spawning areas and play “predator-fish fly swatter”, attacking anything that comes in the zone of their fry, makes them predictable and opens a window for a fun, yet often chaotic opportunity.

Their unquenched thirst for protecting the miniscule fry from basically everything else that swims in the lake makes them highly susceptible to imitations and would be attackers.

The recent PAA event on Old Hickory saw several top finishing anglers fishing for those bass guarding fry in and around the shallow cover. What would also make the bass predictable during this same time of the year is the shad spawn. Although the shad spawn on Old Hickory was a little bit off, the fry guarding tendencies lead to several top finishes for the pros that figured out the open window of opportunity for those bass.

Mark Menendez finished third in the bass fishing tournament, and save for one 4-pounder that hit a swim jig six times without ever opening its mouth, he fished a pretty flawless event by focusing on those fry guarders after the spawn.

He prefers the Caffeine Shad for its erratic action that triggers those onlookers watching with protective eyes on their fry. He prefers the 5-inch size so he can throw it far, work it fast and give a little more menacing profile to the fry. It’s his go to bait when the bass are still up close to the bank and in really skinny water because he can get it in that fry guarding zone without spooking the bass.

As the fish move out, he switches over to the Hack Attack Swim Jig and the Strike King Premier Plus Spinnerbait. He often adds a trailer with some bulk to help keep the baits up in the strike zone because fry tend to always stay at or near the top around cover. With a bulky Rage Tail Craw or creature bait, you can keep the light swim jig or spinnerbait up in the strike zone.

“I look for fry guarders around three basic forms of cover,” Menendez said. “Buck brush,  laydowns and docks offer all the protection bass fry need as they progress through the spawn. Obviously I start shallow, and as the post spawn period progresses, I move out with the fish and the fry to deeper cover targets. At the Old Hickory PAA event last week, there was a full blown shad spawn in the water willows, but the bass had already migrated out to deeper cover. I found the ends of docks to be the best producing cover for fry guarders.”

He fishes the swim jig and the Caffeine Shad on braid. He always uses 50-pound Seaguar braid now. Previously 30-pound braid was his choice for the smaller baits, but he found that fishing for bass guarding around hard-targets you could actually cut your lighter braid. Now that he’s gone up to 50-pound in a quality braid, he doesn’t have those problems anymore.

He’ll fish the spinnerbait on 20-pound Seaguar Inviz-X fluorocarbon line because he wants to keep the bait up in the strike zone where the fry are swimming near the surface.

His rod of choice for the fry guarding techniques is a Lew’s Tournament SL 7-foot, 2-inch Extra Heavy power rod. The rod seems stiff but incorporates a nice mod-fast tip that gives him great accuracy on his casts. The reel needs to be high speed as well. Menendez chooses a Lew’s Tournament Pro 7:1 baitcaster for these applications because those fish hit like a ton of bricks and you need a super fast reel to catch up with them and set a good hook.

His retrieves stay fairly straight forward. Most of the time he’ll start with a steady, straight retrieve. A lot of days that’s how you have to work the lures to get bit around those skeptical bass. Other days you’ll get a lot of fish that he calls “swimbait fish” where they just follow the bait a long ways and never commit to it. Those fish you have to add some variety with twitches, stops and pauses and darts and dives to get the fish to react to a sudden movement.

A third retrieve he’ll often do with the spinnerbait is almost a subtle hopping almost like a slow-motion version of stroking a jig. Where he pumps the spinnerbait up and through the upper water column to keep the bait moving in different directions through that fry zone up near the surface. That often catches a lot of bass for Menendez as they slide out deeper during the later periods of the post spawn, fry-guarding window. Menendez feels like the start and stop of raising and lowering the rod clicks the blades together causing bass to strike out of impulse.

Often times the angles you work the lures on the targets can be the real key as can be multiple casts to the targets. Because the bass are guarding and chasing predators all the time, it’s often the case where an angler casts down one side of a target while the bass was on the other side chasing something away and never even saw your offering.

“I’ve had times where I cast down one side of a log and get nothing,” he said. “Then I cast down the other side and still nothing. Then I make a few casts across the bushy part of the laydown. Then I finally make the risky cast where I know I’m probably going to get hung up, and the bass bites. That’s just what you’ve got to do sometimes to get them to see the bait and commit. But I always feel confident with the heavier line that I’ve got a fighting chance when I make that cast.”

He often starts his search just out from those shallow flat spawning areas and works out to the first contour change. Just the first bit of “verticality” in the area can really draw those fish out, especially if there is not a lot of cover shallow. They fish want to move deep but they don’t want to go all the way out to their summer haunts just yet.

“In the PAA tournament, I found several areas where they had spawned and then moved out to those first contour changes and there were docks at the end of them,” Menendez said. “I would fish the swim jig down the fronts and sides of the docks and the bass would barrel out from under there and crater that Hack Attack Swim Jig. That’s just an awesome bite when they hit it like that. If I could have got that one 4-pounder to eat instead of just nosing my jig every time, I probably would have moved up a spot. But that’s just how those fry guarders are sometimes — protective, not always hungry.” 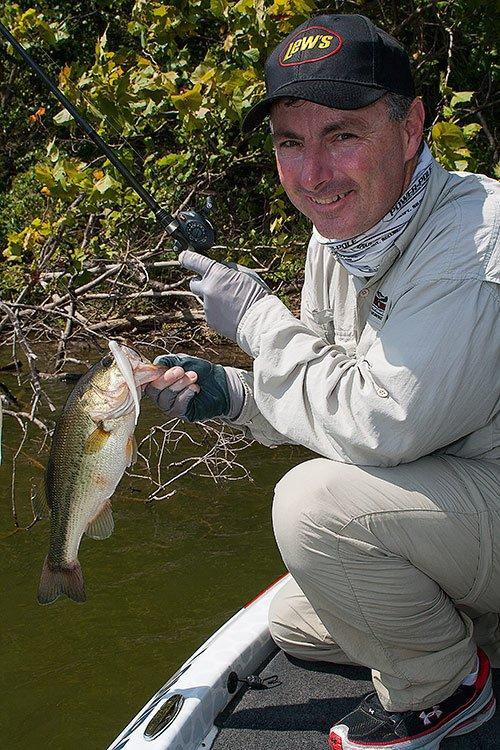