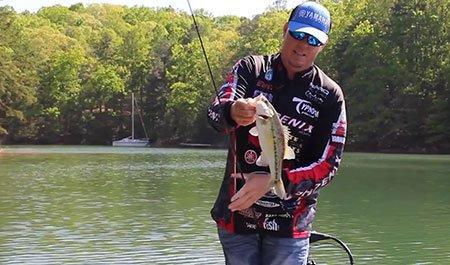 You know in the spring of the year when fish get up and start cruising the banks looking for beds and you know even in the fall when uh ya know all the shad migrate to the backs of the creeks and the fish follow them and get up on the shallow flats. There is hardly a better bait then a soft plastic jerk bait to get a lot of bites and you can occasionally catch a big one, have some fun with it. This one by Big Bite is my favorite one; it’s called a Big Bite Jerk Minnow.

The reason I like it so much is it’s   a little bit bulker, a little bit heavy than some other soft plastic jerk baits and it throws a lot better so I can throw it on a bait caster throw it on a big 5/0 Gamakatsu Worm Hook. Throw it a long way and it sinks faster so you can work it a little bit faster without it coming to the top like some of these baits you know you usually do.

But we’re just out here today covering a lot of water, uh throwing it at targets like rocks and stumps, in light spots just having a ball. It’s a great way to catch to catch ya a bunch of fish and have a good time. Let’s see if we can catch some more.