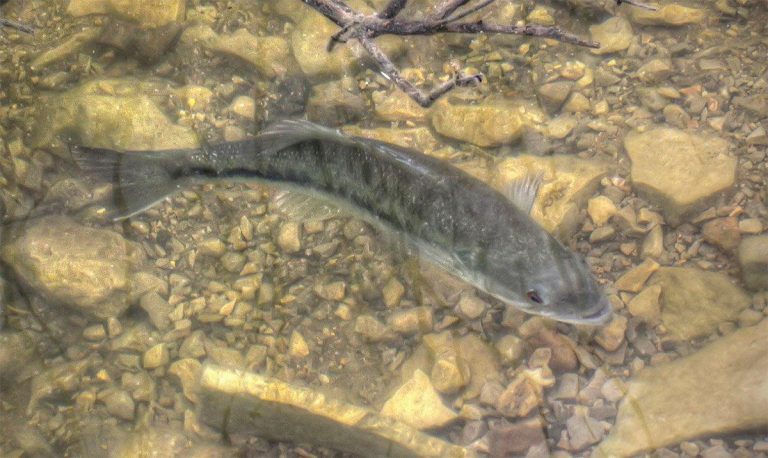 Okay, busted. Big fish on a bed has spotted you, maybe you missed that first bite; either way, you tripped the wire and set off the alarm. That can lead to frustration when fishing for bedding bass.

“Those are the hardest fish to catch, once they know you’re there,” said FLW Tour pro Pete Ponds. “You try to never get in that position, but when you do, you have to be strategic.”

Ponds’ first adjustment is switching from fluorocarbon to braid. He sacrifices the fluoro’s low visibility, but since the fish are now wise to him, he’s more concerned with maximizing the bite. With braid, he feels he has a better chance of keeping a fish buttoned up.

For annoying tough bed fish, Ponds likes a heavy jig; something that makes a bold entry and let’s him give the fish an uncomfortable nudge.

“Normally, they have one spot where they don’t like to be touched,” Ponds said. “If you find that spot, they’ll aggressively spin around and hit at the lure.

“When they start doing that, I’ll switch to more finesse style bait like an unweighted YUM Dinger. The jig is the agitation bait and the Dinger is typically how I catch them.”

As Ponds notes, every bass is different, so close observation is your only instruction manual. Bassmaster Elite Series pro Gerald Swindle agrees, but he’s found a technique that’ll just about always push a bass over the edge.

Favoring a Zoom Z Craw, Swindle’s a big fan of making sure that difficult fish actually has time to spot the bait. The amount of cover around a bed has impacts the equation, but Swindle eschews the notion of in-and-out presentations. 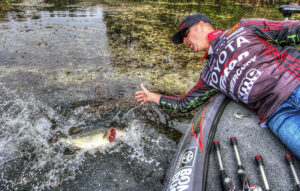 “When people see a bass, a lot of times, the have the tendency to want to throw right on his nose; but I don’t,” Swindle said. “If there’s any way possible, I want to throw behind him — it’s the element of surprise attack, so he spins around and then he’s looking for me.

“If your bait hits in front of the fish, 90 percent of the time, you’re going to spook him. But if you put it a few feet behind him and work it to him, he’s like ‘Here comes a predator. He snuck up on me and now I gotta eat him.’”

Bottom line: “I tell people, ‘Don’t always throw the way he’s looking, throw behind him and try to trick him into coming back there and getting it.’” 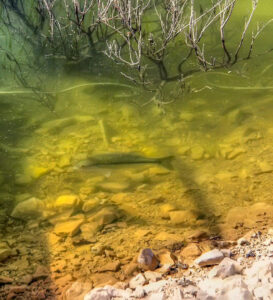 Here are several other agitation fishing tactics for bass on bed guard duty:

Big Bully: Western pro Ken Mah said he keeps a hookless 9- to 10-inch Osprey or Mission Fish swimbait handy for bed fishing. He’ll red line the fish by repeatedly bumping its tail with the swimbait. Some will smoke the swimbait, but ideally, Mah can quickly switch to a drop shot with a Big Bite Baits Squirrel Worm or a Texas-rigged Big Bite Baits Warmouth and stick the fish on a rig they’re less likely to thrash and throw from the shallow zone.

“I can make accurate casts and the bait falls fast in a nose-down posture,” Mason said. “I’ll quickly reel it to the bed and kill it so the falls in front of the fish. Sometimes, I’ll bump the female with the swimbait.”

When he irritates a bed fish into reacting aggressively toward his Money Minnow,  Mason tags in a watermelon/red YUM Houdini Shad rigged unweighted on a 5/0 Mustad KVD Grip Pin hook. 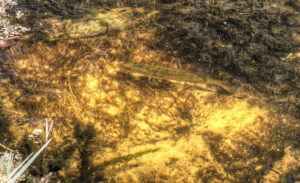 Skip and Drop: During a recent Costa FLW Series event on Lake Dardanelle, I watched co-angler Michael Watson pluck several fish from the spawning zone. Working a deep backwater finger where the fish were tough to spot, his pro was making long casts with a tube, while Watson skipped a Senko under bushes. The key to his presentation was a 3/16-ounce flick shake head.

“This allows me to skip the bait under those bushes where it will sink down to the fish and stay right there in their face,” he said.

Unwanted House Guest: Spooking a fish off the bed is a bummer, but take advantage of the opportunity by sliding a Texas-rigged lizard or creature bait, maybe a shaky head finesse worm into the sacred spot during its temporary vacancy. Suffice it to say that the sense of urgency and outrage a bass experiences upon returning to a brazen intruder usually results in violence.

Gettin’ Jumpy: Elite pro Ish Monroe’s a master with the amphibian impostors and he knows that prespawn females seeking to bulk up for the forthcoming fast love their protein-rich frog. Once on the bed, though, the perspective changes entirely. As he explains, a prominent profile hovering overhead is tantamount to you and and me hearing footsteps on our roof — we assume the intruder has bad intentions.

An expectant bass, or her gallant hubby might try to ignore this irritating presence, but persistence is your best tactic. Make ‘em stare at something staring down on them for as long as you can stand it. Twitch, twitch every 20 seconds or so, and get ready to lean back. 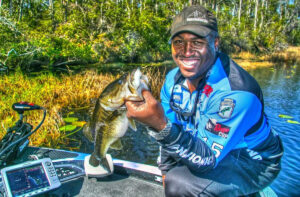