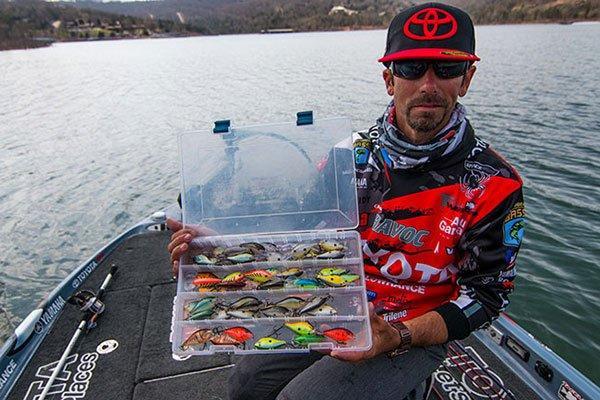 Bass fishing with crankbaits is easy—at least that’s what some anglers think. You can spend a day winging a crankbait around and enjoy moderate success, but that’s often as far as the “chunk and wind” mentality will take you. As you begin to delve into the more technical side of crankbait fishing, however, you’ll realize there’s much more to this technique than casting, reeling and repeating.

Although Elite Series pro Mike Iaconelli admits to keeping a crankbait rigged throughout the entire year, he considers the early spring months to be a crankbait lover’s dream. With thousands of big, aggressive bass en route to eventual spawning grounds, keeping these lures handy can pay enormous dividends.

According to Iaconelli, there are 8 early spring crankbait secrets that, when applied, will produce noticeable improvements for you this season.

Many anglers know they’re supposed to be throwing crankbaits in the early spring. We see it on television and we hear about them winning big events, but do we know why they’re so effective? Learning the real reasons behind it will broaden your understanding of the technique.

“If I randomly toss a tennis ball to you, you’re going to catch it. That instinctive reaction is the same with a bass—if a crankbait is coming by them, they’re instinctually inclined to swipe at the lure. It’s the same thing.”

“Early spring bass are always moving,” Iaconelli said. “They’re always in some sort of transition. So using a moving bait for moving fish is a totally logical thing to do. When the water temperatures begin to warm, these bass have one instinct—they’re thinking about spawning. As anglers, we’re looking to intercept those fish throughout their annual migrations and a crankbait is one of the best tools for the job. You can cover water very quickly and easily move with the fish.”

In addition to picking off these wandering bass, crankbaits serve another important purpose by forcing the fish to make a split-second decision.

“Slow-moving baits such as jigs or worms often only appeal to a hunger strike,” Iaconelli said. “The bass inspect them for a while before finally deciding to eat. Crankbaits entice these same hunger strikes, but they also trigger reactions. Early spring bass aren’t always feeding, but you can force-feed them with a strategically placed crankbait.”

2. Change in direction is everything

If someone is chasing you, you’re probably not going to run in a straight line—you’ll probably dart in every possible direction in order to avoid the threat. This is exactly how bass forage behaves, making it imperative for your crankbait to change direction throughout the retrieve.

“Regardless of the time of year, I want my crankbait to change direction quickly,” Iaconelli said. “That abrupt change is what really triggers both hunger and reaction strikes. It’s a natural occurrence that makes bass eat. Whenever a shad or crawfish is in danger, they’re moving erratically.”

3. Match the vibration to temperature and activity level

Not all crankbaits are created equal. With little effort, you’ll find some that wiggle, wobble, dart and dash, but what difference does it all make? According to Iaconelli, each action is meant for very specific situations and water temperatures.

“You can also feel the belly of the bass with your fingertips. If it feels crunchy, you can bet they’re feeding on crawfish. When it feels soft or mushy, you’ll be better off with a shad or bream pattern most likely.”

If you’ve ever walked down a store aisle full of crankbaits, you’ve probably been overwhelmed by the variety of color selections—some colors and patterns more closely resemble spaceships than crankbaits. Instead of getting caught up in all the hype, Iaconelli makes a concerted effort to keep his colors simple throughout the early spring months.

“I think a lot of people go overboard with crankbait colors,” Iaconelli said. “I follow an old fly fishing adage this time of year—you have to match the hatch. Whenever I get to a place, I’m on a mission to find out the bass’ primary food source. If you stick to your basic shad, bluegill and crawfish patterns, you’re going to catch plenty of fish.”

If you’re having trouble getting bites with generic crankbait patterns, don’t assume the bass aren’t feeding. Instead, try using a more neutral-colored crankbait. When the fishing gets slow, this can produce great results.

“When things get tough, whether it’s due to post-frontal conditions or increased fishing pressure, I have a lot of success with very natural colors,” Iaconelli said. “This is extremely important. You can get away with loud colors when they’re really chewing, but you have to tone it down when they get lockjaw. This is why I designed custom colors for Rapala—they’re a little more neutral and less intrusive, which means they get more bites from finicky bass.”

The popularity of red crankbaits explodes in the early spring months and it’s largely due to a common misconception among anglers. Contrary to popular belief, not all crawfish are red in color.

“Early spring bass fishing usually coincides with the crawfish becoming much more active as they emerge from their winter hiding spots,” Iaconelli said. “So in a way, people are right—bass eat a bunch of crawfish this time of year. But are they all red? Absolutely not.”

If they’re not all red, what color are they? That depends largely upon your geographic location. Iaconelli has a few tricks up his sleeve that help him determine the predominate colors of a fishery’s crawfish population.

“Throughout Texas and many parts of the Tennessee River, you’ll notice a lot of red tones to the crawfish,” Iaconelli said. “But in other areas of the country, you’ll see a lot of oranges, greens and blues. You can research an area’s colors online sometimes, but when you get to the lake, kick rocks over at the boat ramp and start looking for crawfish. Also pay close attention to the bass’ throats because you’ll see all kinds of antennas and pincers sticking out.” 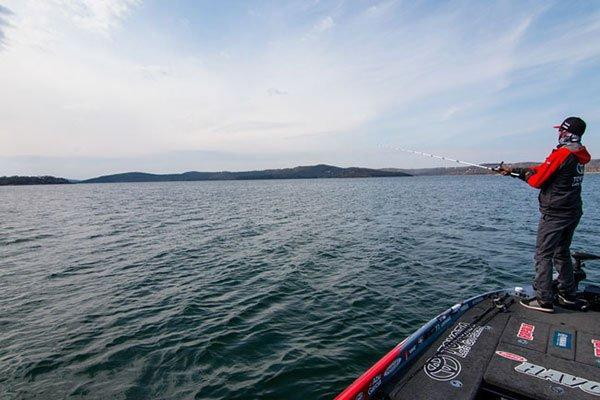 After fishing a while without any action, it’s easy to start daydreaming of more productive days and better fishing. If you want to optimize your early spring cranking, however, you need to stay focused for the entire duration of each and every cast

How to make a Shad Rap suspend perfectly

Neutral buoyancy is a very desirable crankbait characteristic in cold water temperatures. Iaconelli changes the belly hook of his No. 5 Shad Rap to a No. 4 VMC Short Shank Round Bend Treble and the tail hook to a No. 5 VMC Short Shank Treble. Just by upsizing his trebles, he’s able to make a No. 5 Shad Rap suspend perfectly on 6 to 8-pound fluorocarbon.

“Like we’ve already discussed, a change in direction is everything when you’re cranking,” Iaconelli said. “You can achieve this with two different approaches—physical deflection and crankbait design. By picking a crankbait that runs a little deeper than the depth you’re targeting, you’ll be able to deflect that lure off of small rocks, stumps and submerged trees to elicit reaction strikes. Or you can use a ‘hunting’ crankbait such as the Scatter Rap. With just a quick increase in your retrieve speed, you can make it change directions easily.”

7. Connect the dots with map study

Ike just crushed ’em on Table Rock with these techniques and we got it all on film. Watch the video here.

Early spring bass are looking to spawn, hence the term “prespawn period”. As you search for a productive crankbait pattern, it’s important to understand the value of map study. It allows you to pinpoint the bass’ wintering locations and nearby spawning grounds, giving you a distinct advantage over other anglers.

“Bass are going to winter in the deepest, most vertical areas of a lake,” Iaconelli said. “It’s where they spend the most extreme times of the year in both the winter and summer months. If you can locate a few likely wintering holes on a map and find nearby spawning pockets, all you have to do is connect the dots. The bass will always travel along the contours—they’re not making random, uncalculated movements. Look for any features that jut out and interrupt these contour lines such as underwater points, long boat docks, grass lines, rip rap or even boat ramps.”

Unlike many other bass fishing presentations, crankbaits allow you to cover massive amounts of water in a short amount of time. To use this to your advantage, Iaconelli suggests casting at a 45-degree angle to the bank. While parallel and perpendicular angles often focus on specific depth ranges, these quartering casts will allow your crankbait to hit every depth zone along a particular contour, increasing your odds of generating a strong, replicable pattern.

Many fisheries have hundreds, if not thousands, of shallow bays, pockets and fingers, making it difficult to pinpoint likely spawning grounds. When you find them, however, it makes it much easier to catch early spring bass with a crankbait. If you know from where the bass are coming and where they’re headed, you’ll have a much clearer idea of their likely travel route.

The next time you hit the lake in the early springtime months, don’t sell yourself short—keep a crankbait in your hand and hang on tight. These tips have helped Iaconelli win some of the biggest tournaments in the world and they’ll have a big impact on your success as well.