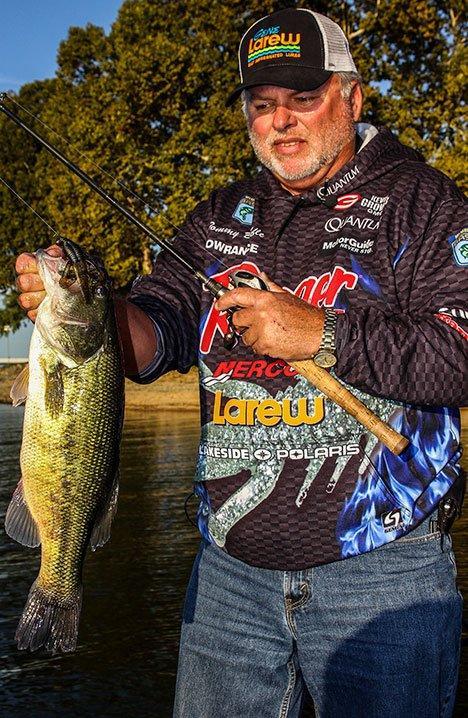 The rod loaded and released rhythmically as the lure bumped along the bottom. Ticking and grabbing as it caught the edge of rocks along the hard bottom under the tension of the line being winched by the reel. The line sluggishly tightened as the rod tip began to load as the fish began to take the bottom bouncing lure in a new direction. The angler reacted with a hard hookset and started a game of tug of war with an unwilling bass on the other end.

I spent many a spring and summer knee deep or canoe deep in the clear waters of Ozark streams in my high school and after college days. I don’t mean to brag but I could drain a creek of all its smallmouth and largemouth bass with box of jigheads, tubes and grubs. And it was the simplest approach everâ€”cast out the bait, let it get to the bottom and just reel it along the bottom try to scrape and tick the rocks along the way. It worked well in small waters for many years.

Turns out it really works well on larger reservoirs in a slightly different capacity. Bassmaster Elite Series angler Tommy Biffle developed a new system through trial and error that has lead to four wins in the last two years at the Bassmaster Open, PAA and Elite Series levels. His success came largely on a Gene Larew Biffle Bug with a Gene Larew Hard Head.

The first part of his system involves a soft plastic he designed. The Bug features a hollow cavity  with a big flat tail and two legs that are designed to swim when lifted and dropped or pulled along steadily. Then the 4-inch bait is rigged on a Hard Head which is basically a football shaped weight attached at a hinge to an offset wide-gap hook. When rigged correctly, the hole faces down on the bug and the hook point lays on the back of the bug, keeping it snagless but still fairly easy to hook a fish.

Biffle fishes his rig on heavy Sunline Shooter fluorocarbon line, usually 17-20 pound tests. He uses his signature 6-foot, 10-inch Quantum Tour Tactical Heavy rod with a 7:1 gear ratio Quantum EXO reel. This setup enables him to hook a fish well and the confidence to land them, even around heavy cover.

But the most compelling parts of the Biffle Bug/Hard Head system don’t involve his tackle or lure choices. It’s the manner in which he fishes the rig and where he fishes it.

“It’s funny because I noticed after a year or so that I was fishing through areas I normally would have never stopped and fished and catching a lot of bass I normally would not have with the Biffle Bug,” Biffle said. “You can fish it fast and cover water like a crankbait, but you don’t lose as many fish as you do on a crankbait because the head is free of the hook and it’s hard for them to get leverage on you.” 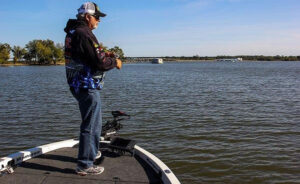 We wanted to see the system at work in person with the person who has conceptualized over it. So we hopped in the boat with Tommy Biffle on Grand Lake during a time when the lake was fishing pretty tough. In fact a lot of other patterns were only yielding little bass and some sessions during a recent writers event, yielded no fish.

Needless to say it was less than ideal conditions to see a lure and system for fishing for the first time. It turns out Biffle doesn’t get spun out by weather or conditions or fisheries or any number of things that spin out so many fishermen. He’s incredibly even keel and incredibly simple with his approach to fishing.

“The first time I tried the Hard Head and Biffle Bug was during the winter on a lake near the house,” Biffle said. “I was out trying to get a picture fish for a photo shoot. I remember my buddy who had been making the Hard Head for years told me he had swam a worm on it and caught a lot of fish over the summer. So I thought my Biffle Bug would look really good on it for crawling around in the cold water. I made five casts on a spot they get on sometimes and usually I will catch a good fish off of now and again. I hooked four bass and lost the fifth one but those four weighed more than 20 pounds. I knew I had something then.”

Fast forward to the Bassmaster Elite Series event that got cancelled on the Arkansas River back in 2010 and moved to Ft. Gibson, right in Biffle’s backyard. In that event, guys were fishing offshore and on long flats and points extending out into the lake, targeting hard spots on otherwise flat soft bottoms. Biffle knew the field would all be throwing big worms, football jigs, Carolina rigs and crankbaits. He wanted something he could fish a lot of those places fast and find which ones were holding bass. Out came the Biffle Bug and Hard Head again. The rest, as they say, was history. The following week he did it again in a PAA Event flipping and casting the Biffle Bug. He won again this year in a Bassmaster Open and again flipping it on the PAA.

But we were most enamored by the cast and retrieve aspects of the Biffle Bug and Hard Head combo.

“It has changed the way I fish,” Biffle said. “I stop on areas I would have never stopped because I can cast it so far and with the way I fish it, I can cover so much water in a hurry, faster than with other baits.”

The key for Biffle lies in keeping the Hard Head and Biffle Bug banging the bottom but doing it quickly. For most cases, that involves throwing it with the 7/16-ounce Hard Head and reeling quickly in water up to 5 feet deep. He catches bass out to 20 feet on the combo but where he can really cover water quickly is in that 0-10 foot zone of water.

Watching Biffle fish the bug, we noticed he keeps the rod tip point towards the bait but not directly at it  so there is a slight angle on the line coming off the last guide to the water. He reels it fast, even with a 7:1 reel but still his rod would jump as the head collided with hard bottom. That’s the key is finding those rough hard patches out there on otherwise clean bottoms.

He also did really well ticking the bait along near laydowns, stumps and even docks especially walkways.

“I don’t fish crankbaits,” Biffle said. “I used to catch a lot of bass on cranks, but I got tired of losing them too. With this deal you don’t lose hardly any fish. And, if I go down the bank with you and I’m throwing the Bug and you’re throwing a crankbait, I’m going to catch more bass than you.”

From what we saw last week, he might be right. We’ve had good experiences with the Hard Head and we’re looking forward to applying it around more situations on the water. The key is to fish it around rock, ticking and banging into the rock, and reel it faster than you’d think while maintaining that contact. When a fish bites, often you will just feel a slight difference in weight of the bait or your line will just start off in a slightly left or right direction. Anytime you feel a slight change, it’s time to swing.

On our day on the lake, Biffle pulled into one pocket and caught probably 14-16 pounds of bass in short order fishing the bait fast over rough patches of rock on flats and points and around isolated wood in the form of stumps and laydowns.

Many more anglers will learn the virtues of the Biffle Bug and Hard Head combo and the system for fishing it on their own and on different waterways across the country. No pun intended but we’re probably just scratching the surface on the new approach to covering water effectively for bass.