Prespawn bass fishing is quickly approaching for much of the country. While our friends to the north still have a ways to go, lots of states are warming up and the bass are chomping at the proverbial bit to move towards shallow water. Of course, when they move towards the shallows they’re hungry, active and perhaps most importantly, much easier for anglers to catch.

I’ve heard all kinds of theories about when and why prespawn bass move shallow. To be totally honest with you, I’m not sure I buy into one theory over any others. I’m not a biologist and I don’t pretend to be, so I try to take environmental cues from surrounding wildlife each year and make my own opinion.

You can read articles and learn plenty about bass fishing but as the old saying goes, there is absolutely no substitute for time on the water and close attention to detail. I believe that nature and wildlife act as one cohesive symphony. I can’t explain it and I know it sounds painfully lame, but I’ve noticed a lot of things in my area that always—no matter what—coincide with the first push of shallow prespawners.

These occurences may not line up exactly the same for you, so that’s important to understand. This kind of stuff all revolves around your geographic location. What’s more important, however, is the need to pay attention to your surroundings when you first start crushing those big bass in the prespawn period. That first good day you have this year, I want you to put your rod down for a little while and look around. What are the birds doing? What about the plants? Which ones are blooming and which ones are still dormant? Has the grass turned green yet or just the clover patches?

I’m well aware that this may be a little “out there” for some folks and I totally get that. But I want to run through some environmental cues that, for me in the Southeast, always indicate awesome prespawn bass fishing.

I keep a close eye on our Japanese magnolias this time of year. We had several in our yard when we bought this house and I never did like them. They bloom for about two weeks and return to ugliness for the rest of the year. Not to mention, they smack me in the face when I’m cutting grass.

But after the past several years, I can guarantee you that they’re not going anywhere. Oddly enough, I’ve learned that whenever they bloom, the prespawn bass are shallow and choking on crankbaits. It hasn’t failed me yet.

For instance, I’ve been fishing a lot this week. It has been in the 70s and absolutely beautiful outside. The water temperature is in the 55-degree range, the water has nice color to it and by all accounts, the bass should be smoking a shallow plug right now. I went two days in a row to try and force this bite and guess what? It never happened. I caught one hybrid on a crankbait and that’s it. For the life of me, I couldn’t figure out why it wasn’t happening.

That is, until I pulled back into my driveway. Our Japanese magnolias look to be about 2 weeks from blooming. There are no purple flowers to speak of, which made the light bulb click in my head. So I went out the next day and targeted bass a little deeper and I had a much better day of fishing.
A few years ago, those silly magnolias started to bloom in the first week of February. It was cold and nasty outside and I have no idea why they decided that was a good time to do their thing. But sure enough, even in that bad weather, I went to the lake and smashed them on a shallow crankbait for about three weeks. I found the prespawners before anyone else started to even look for them.

This is why it’s important to pay attention to your surroundings. When you crush ’em this time of year, you need to be looking for what nature is currently doing. I don’t know why the Good Lord made it be like this, but if you ride past my house and see my Japanese magnolias blooming, you better hightail it to the lake and start throwing a crankbait.

Hummingbirds come out to play

We keep our hummingbird feeders up all year long. My wife likes to look at the little guys and I don’t care much about ’em. But I don’t mind those feeders because when the hummingbirds show up in our yard, the prespawn bass tend to get on primary and secondary points. It sounds like I’m being a hippie or something, but it’s like clockwork every single year. The first time I see a hummingbird buzzing around one of our feeders, my rear end is hooking up the boat and going to the lake.

According to folks smarter than me, hummingbirds migrate to their winter homes in southern Mexico and Central America in the winter; apparently they’re like me and hate the cold weather. But something inside of them knows when the warm weather is coming in the United States. Normally the males migrate north first and this happens anytime between January to early March in my area. So if I’m outside and notice smaller and brighter-colored hummingbirds (the characteristics of males) showing up in our yard, it’s a safe bet that the prespawners are just starting to move shallow.

Again, things like this may sound a little weird, but they’re an excellent way to get ahead of a pattern or bite before anyone else in your area. 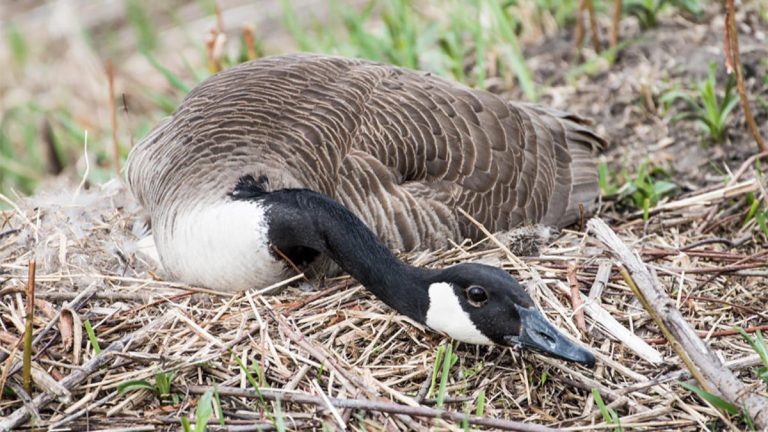 I’ve had my fair share of unpleasant encounters with geese. I don’t know what in the world makes those dang things so ornery but my gosh, they’ll try to eat your face off if you just look at ’em wrong. They’re some mean dudes and I don’t want anything to do with them.

Although they’re total jerks, they’ve started to inadvertently help me understand when the fish are moving shallow. In my part of Georgia, they don’t necessarily tell me when prespawn starts, but they do tell me when I need to start transitioning from prespawners to spawners. Allow me to explain.

My buddy and I fished a tournament one Saturday in early March. It was one of those special days that only come around once in a blue moon and we absolutely beat their faces in. We were culling 4-pounders all day on what seemed like every other cast. Towards the end of the day in between our giggling and high-fives, I noticed that a bunch of geese were sitting on their nests along the bank. They were mean as a two-headed rattlesnake, too. Anytime we got within 20 yards of them they’d get to hissing and carrying on like they were big and bad.

After we won that tournament I figured I’d fish the Sunday tournament by myself. My buddy had to work or something, so I just jumped in and figured I’d see what happened. I started off the day by fishing stuff almost identical to what we had fished the day before. I beat the tar out of that stuff and man, by lunchtime I probably had three fish for four pounds. I didn’t know what the heck was going on.

I decided to call an audible and start targeting the bass closer towards their eventual spawning grounds. I keyed in on sunny, windblown, south-facing, sandy flats and I absolutely stomped ’em for the last three hours. It was a repeat of the day before, but just a little closer to spawning flats. And wouldn’t you know it… I got hissed at and chased by ticked off geese all afternoon. They could hiss and carry on all they wanted to but I won that dang tournament.

I honestly don’t know what made me even begin to put two and two together but I’m sure glad I did. Each and every year, I watch closely for nesting geese on the shoreline. It seems to always happen towards the end of the prespawn period so whenever I see them, I know the bass are fixing to make a major and sudden move away from their typical staging areas and towards their spawning flats. The prespawn bite is quickly coming to an end.

I swear I’m not a hippie. I don’t think so, at least. But I cannot overemphasize the importance of paying attention to nature when you’re having an awesome day of fishing. It’s so easy to get caught up in the excitement but if you can just take a few minutes and look around, you’ll be able to consistently duplicate that success each year.

Heck, even if you do get caught up in the excitement, it’s not too late to make some important notes. Say you get back to the house around dark. Grab you some supper, a cold drink and talk non-stop to your spouse about your killer day of fishing. But in the morning when you wake up, grab a cup of coffee and go outside. Look around in your yard and seriously take everything in.

Are the ferns starting to green-up again? Have the cardinals and blue jays made their way back to your feeders? Are the dogwood trees budding yet? Are the deer starting to move through your property again? Have they shed their antlers yet? Can you finally hear the sound of those pileated woodpeckers after a long, nasty winter?

So often we want the “quick fix” when it comes to both fishing and hunting. We think we’re going to read or watch something that will turn us into overnight experts. While research surely helps, nothing will ever beat the ability to keep a clear mind and become part of nature’s symphony. Nature talks to us every single day but always remember… it’s up to us to listen.