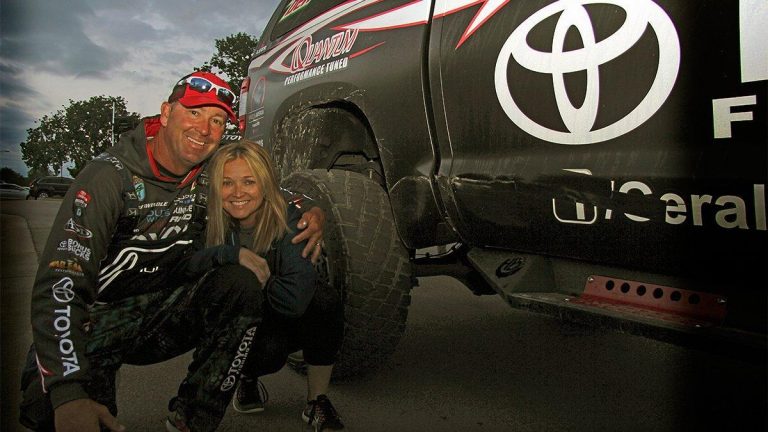 Under heavy Sunday morning clouds at the Ingalls Harbor boat ramp, Gerald and LeAnn Swindle laughed, chatted with friends and paused for a photo rich with love at the end of a very trying week at the Academy Sports + Outdoors Bassmaster Elite at Wheeler Lake.

â€œWe’re keepin â€˜er held together with duct tape like Dale Jr. at Talledega, but we’re laughing and fishin’ on Sunday,â€ said Swindle while hugging his bride and best friend  â€œLuluâ€ â€“ a nickname he tagged her when they began dating 13 years ago.

Every Elite Series pro will tell you that making Sunday’s Top 12 cut is the end goal of each week on tour, but for the Swindles, surviving Thursday was a victory.

â€œWe had an unusually hectic week and Thursday was pretty much a catastrophic fail,â€ said Swindle, sitting on his boat’s front deck as LeAnn backed him down the ramp. â€œI preach the importance of having a Positive Mental Attitude and Thursday was a test to see if I believed my own preachin’.â€

LeAnn had just returned to their RV and started to sip her first cup of coffee Thursday morning when Gerald phoned for help. He had trolling motor issues and she rushed to meet him at a ramp several miles away to provide a replacement motor.

The stressful and hurried pit crew maneuver seemed to provide the perfect fix, but while at the ramp, 5-foot, 2-inch LeAnn, who maneuvers a 21-foot bass boat trailer better than most men, accidentally hit a boat trailer used by B.A.S.S. media, doing minimal damage to the trailer, but significantly gouging the passenger door of the Swindle’s Toyota Tundra.

â€œMy wife raced to come help me, and then she had an accident in the parking lot as she headed back to the campground,â€ Swindle explained. â€œShe was dreadin’ telling me about it, because she absolutely hates to make mistakes; she was really beating herself up.

â€œThe bottom line is, it’s pretty minor in the big scheme of life. I mean, heck, nobody got hurt and bless her heart, she and the sweet lady we were camping next to ran to Lowe’s and bought black Gorilla tape to patch it up the best they could. She’s already called our insurance company, the Toyota dealer and the graphic wrap company. She’s on top of taking care of business just like always.â€

However, Swindle’s woes didn’t end with a long dent in the boat ramp parking lot. His trolling motor issues continuedâ€”even with the replacement.

â€œBy the time I rolled into weigh-in on Thursday, I was on my third trolling motor,â€ Swindle said. â€œI beat that first one up worse than I realized at Winyah Bay and the second one was a spare with a bad motor, I guess.â€

Swindle, who wears the initials PMA for Positive Mental Attitude on a bracelet and the back of his hats, provided powerful proof of such mental strength when drifting down Wheeler completely powerless with a dead trolling motor.

â€œI had taken the bad motor off and I had nothing but a bracket while I waited for the replacement,â€ Swindle said. â€œBut I managed to catch two keepers and lost a 4-pounder while drifting with no motor, so I asked myself, â€˜If you can hook three good ones with no trolling motor, what can you catch once you get a motor on here?’â€

At the end of one of the absolute worst days Team Swindle had ever endured on tour, they sat in 11th place Thursday.

Two much smoother days on Friday and Saturday, mostly on the strength of a new Zoom swimbait, vaulted Swindle into 8th place entering Sunday’s final round.

By Sunday morning, long after the last angler had idled out of Ingalls Harbor, LeAnn sat behind the wheel of their slightly dented Tundra reflecting while her trusted dog Myrick slept in the passenger seat beside her.

â€œThink how bad this week could have been if the Lord hadn’t been watching out for us. Thank goodness the trailer I hit belonged to people we knowâ€”it could have been a stranger’s trailer that might have been really mean about it. And at the end of a very rough week, it’s pretty hard to complain when you’re fishing on Sunday,â€ she said before driving off with plans to head back to their RV, sip a coffee, watch GUTS Church online and reflect a little more.