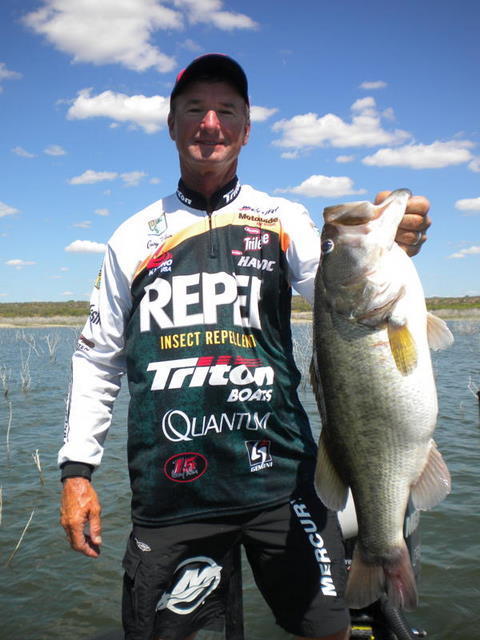 Most anglers, weekender or pro, look to sponsorships as a way to support their fishing. Professional anglers are no different but their motivation for keeping them may be. Their livelihoods demand good sponsors.

All things considered and in a hypothetically perfect world most anglers try to align themselves with companies whose products they believe in, those they would use anyway, and those that build products that they can help create and endorse truthfully. They are looking for staying power too and also a company that allows them R&D options and a good, solid financial backing. Economic issues can cause some movement in endorsements and sponsorships but for the most part pro’s look for long standing partnerships and those they can nurture using their creativity. Some anglers that  jump from deal to deal can lose credibility. Others have found comfort by staying loyal with strategic sponsors their entire careers.

We had the opportunity to sit down with legendary pro Gary Klein and talk to him about his sponsorships and why he has worked so hard to keep some of his sponsors since 1979.

Wired2Fish: In looking at your sponsorships and companies you are aligned with you have 3 companies you have been with since 1979 and 1980 respectively. In today’s environment that is pretty special.

Klein: I have worked with Mercury and Berkley since 1979. I have been with Zebco/Quantum since 1980 and yes it is by design. I am super confident in their products and have seen the evolution of their products improve each year. I get to learn both sides of the business. One is from the product development side and the other is the marketing side. Another neat part of our jobs is seeing the early stages of products and having input on tweaks that will make them even better. My experience began with the three companies above when they began to see the value of the professional angler and my sponsors are like family to me.

I am still with all of these companies and am proud of those associations. When I started with Berkley they had XT only but had a visionary by the name of Paul Johnson who could imagine where we are today, even way back then. I give Paul a lot of the credit for seeing the future and where we were headed with line in particular.

Quantum has been part of my arsenal since 1980 and I have seen some of the first baitcasters and now the EXO, the Smoke and PT’s which are top of the line as far as I am concerned. They went from a so-so company to the top of the heap in a very short period of time and I am glad I was on the ride with them.

Wired2Fish: You have also been with Triton for 10 years. Before that you ran Skeeter and ProCraft. How did that relationship begin?

Klein: I started with Triton because of Earl Bentz. When we started the World Championship Fishing and boat racing was part of it Earl stopped by and liked the way I drove a boat. We talked there but I called and set up an appointment with him and put the deal together in his office. I truly believe in their boats and feel I am spoiled because I get to run them. Some things have changed over the years but the Triton family still has the same kind of folks running it. When I started it was Ken Premo, Neil Hart and Earl that made me feel at home and now the new staff continues to do so.

Wired2Fish: You recently entered the non-endemic sponsor realm with Repel. How has that sponsorship gone so far entering your second year?

Klein: Repel has worldwide distribution and are truly starting to see the value of professional fishing and the anglers. They understand the reach and have the dedication to stay put and build the relationship even further. I remember when you told me about Royal Purple Maxfilm. They too are a non-endemic to our industry and I buy that spray lubrication for my boats because I have excellent confidence in it. You haven’t steered me wrong ever and I work hard not to steer others wrong either. Because I use the products of my sponsors, like Repel, and have confidence in them it’s easy to tell others about them. I truly believe in them and feel they are the best products and do what they say they will. They too are part of my angling family and that relationship continues to grow. I am obligated to tell the truth and I do.

Wired2Fish: We know you keep up with the websites, read the magazines and stay up to date on what other anglers do in the way of sponsorships. Does that have an impact on what you do?

Klein: Not really. I am excited when I see someone get a new sponsor that hasn’t been in the sport before. It’s great news because times are tough. The bottom line is I am very loyal and believe in the companies that support me. It’s funny but once I have that association I live it. I believe strongly in the companies wherewithal and innovation that I work with and because I do have a confidence in their products that takes one more variable out of the puzzle for me. I run the best boat, have the best trolling motor and outboard and use the best gear and tackle so it makes my job easier when I am on the water. That peace of mind is huge.

Wired2Fish: Anything new on the horizon for you?

Klein: I have a couple of special projects I am involved with that I can’t talk about but rest assured the products that come from them will be killer. I do not do anything second rate and its neat to be able to get in on the ground level. I will let you know more about these as they are developed further.

You can learn more about Gary and the companies he works with by going to Gary’s website at garykleinfishing.com.