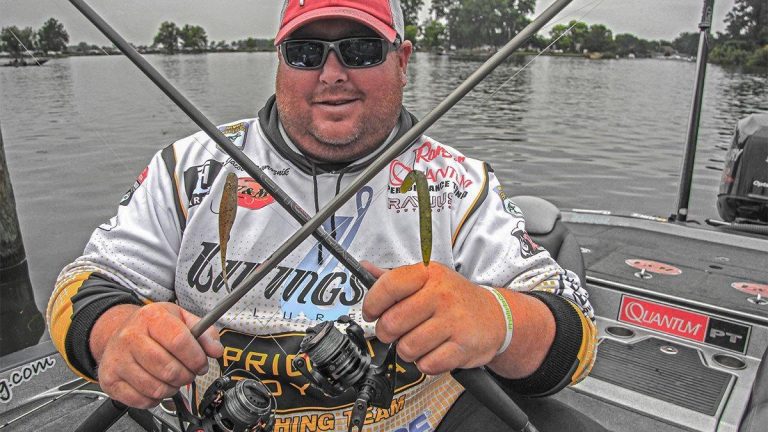 Jacob Powroznik was sitting in the pre-dawn darkness of day two at the Plano Bassmaster Elite at Lake St. Clair pulling spinning rods from his rod locker when Justin Lucas, docked next to Powroznik, said, “Jacob, help me hook up this drop shot.”

Most might find it odd that Lucas, one of the world’s best bass anglers who sits back-to-back with Powroznik near the very top of the Toyota Bassmaster Angler of the Year standings, would ask a fellow pro to help rig his lure. But like a willing father threading a red worm to a hook under a bobber for his kid, Powroznik just grinned, grabbed the end of Lucas’ line, and put his expert touch to the finesse rig.

Heck, it’s really nothing new. Powroznik was shown on the Bassmaster TV show taking a time-out in the middle of competition during last September’s Toyota Bassmaster Angler of the Year Championship to rig a drop shot for fellow pro Cliff “Cajun Baby” Crochet.

Apparently the time taken to assists other pros with their drop shot rigs is no hindrance to Powroznik””he won that tournament in which he helped Crochet, and he’s sitting near the top of the leaderboard this morning on St. Clair.

No surprise, just before untying from the dock, Powroznik graciously offered a few quick tips to the drop shot rig that’s made other top pros come calling for his tutoring.

“If it’s sunny, I like a longer 16 to 18-inch tag end””or leader””between my hook and weight because fish tend to be a little higher in the water column. But if it’s cloudy, Smallmouth are especially prone to hug the bottom, so I’ll shorten it to 6 or 8 inches,” said the Chesapeake Bay resident.

?Sometimes you need a meat hook

“Everybody thinks that all drop shots should include tiny hooks, but that’s not true. The size of the soft plastic you’re using should determine your hook size,” warned Powroznik. “If I’m using a 4-inch V&M Chopstick or a small soft plastic jerkbait on my drop shot, then I’ll go as big a 2/0 straight shank hook, because you’re not going to get enough of a tiny hook through the bigger lures to keep bass hooked if you use anything smaller.”

Greg Hackney and Kevin VanDam are using big, size 40 and 50 spinning reels these days because their larger spools reduce infamous twist and tangles, but Powroznik still opts for the smaller size 25.

“I use a fairly small reel, but I’m pretty adamant about the Quantum Speed Freak for its really fast 6.2 gear ratio that picks up 33 inches of line when you turn the handle. That’s really key, because slower reels can’t keep up with a smallmouth that’s screaming to the surface and throwing slack in your line.”

Too big of line is the biggest mistake

“The No. 1 thing most anglers do wrong when drop shotting is use line that’s too heavy,” concluded Powroznik. “Stay away from 8 and 10-pound test, loosen your reel’s drag a little bit and use 6-pound HI-SEAS Fluorocarbon instead. I swear you’ll get more action out of your lure, and way more bites.”