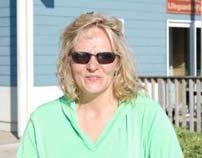 Over a career that has spanned more than two decades, Mark Davis has established himself as one of the most talented, accomplished and respected anglers on the BASS and FLW Tours. In some senses, he’s an open book and has been the subject of thousands of words of press. But a little-examined part of Mark’s success has been the role of the woman behind the man, his wife Tilly.

Here she is in her own words:

W2F: What was your first impression of Mark?
Tilly: Mark is like a big sweet teddy bear, but he was everything I said I’d never date. He was very laid back, very country.

W2F: Where did you go on your first date?
Tilly: We went to Wal-Mart to get a battery charger. Then we went to Rod’s Pizza in Hot Springs.

W2F: Is he difficult to be around when he doesn’t do well?
Tilly: He just gets very quiet. He’s ten times harder on himself than anyone else could ever be.

W2F: Do you think any of the other anglers’ wives are jealous of the success that you and Mark have achieved?
Tilly: I don’t ever think about it.

W2F: If Mark were on death row and had to pick his final meal, what would it be?
Tilly: Fried fish.

W2F: What’s the last chick flick you took him to?
Tilly: I don’t know. Maybe Hope Floats, ten years ago.

W2F: Did he cry?
Tilly: No. I’ve only seen him cry twice in twenty years.

W2F: Does he use the internet?
Tilly: If I get it up and going.

W2F: Tell our readers something surprising about Mark.
Tilly: He’s a huge cut-up, a big jokester. He has a great sense of humor and makes fun of everyone.

W2F: What is your favorite lake to visit?
Tilly: I’ve got to think about that one. Maybe Guntersville.

W2F: What is your least favorite lake?
Tilly: Maybe Seminole. It’s hard to find a place to stay there.

W2F: What was the last non-fishing or hunting vacation you took?
Tilly: For the first time ever last year, we went on one. We went to Oregon to visit the Yelas family. But we ended up fishing anyhow, for salmon, and going crabbing.

W2F: If forced to give one sport up, would Mark give up fishing or hunting?
Tilly: Probably hunting. He knows he has a God-given talent for fishing and he wants to make the most of it.

W2F: When do you think he’ll retire from competitive fishing?
Tilly: I would say no more than 15 years from now.

W2F: When would you like him to retire?
Tilly: It doesn’t matter to me as long as we have money in our bank account.

W2F: Who is his best friend on tour?
Tilly: When he fished FLW, he shared room with Jay (Yelas). But since he has been back at BASS , he hasn’t found his groove yet.

W2F: Can you back a trailer?
Tilly: Yes.

W2F: What is the biggest bass you’ve caught and what did you catch it on?
Tilly: Probably a five pounder on a worm. That’s about all I fish.

W2F: What is Mark’s most prized material possession?
Tilly: He’s the most unmaterialistic person I know. Probably his boat.

W2F: What is the best thing about being married to Mark Davis?
Tilly: It’s just right. We know we’re right together.

W2F: What’s the worst thing about being married to Mark Davis?Tilly: It’s stressful all the time. Between the kids and bass fishing, there’s always something to worry about.