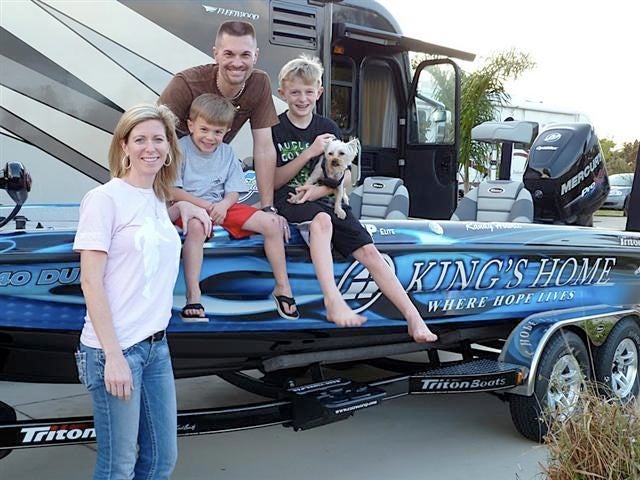 “So many roads, so much at stake

I’m looking at a coward.

And he is in chains.   From where I sit this minute in the db/bb/re I can see a man in handcuffs sitting in the back of a police cruiser.   Two cruisers, and one K-9 unit are now in the RV park.

I told the woman who lives with the man in chains has a black eye.   And bruises.

If you abuse your spouse, you are a coward.

If you abuse your children, you are a coward.

All bullies are cowards.   But I believe that when all is said and done, and the cowards stand before whomever it is that will decide where the cowards will spend eternity, the cowards need to know one thing right now.

Whom you answer to, is not afraid of you.

The police are all around Elite angler John Murray’s motorhome, the man in chains came from the cottage on the other side of John’s RV.   As the police drive away all I’m watching is the Murray’s through their picture window.

John is next to his wife, Amy

And Amy is holding their two year old boy, TJ.   Love and hate under the Winnebago lights.

As the police came into the campground, so did Elite Angler Randy and Robin Howell, all peacocked up and bragging about the sushi dinner they just had.   They laugh at the look on my face knowing my feelings on eating bait.   I told them the over/under on how good they will be feeling later is 8hrs.

I took the under.

As I’m leaning in the driver’s window talking to Randy, and watching the police action less than a 50 yard field goal away, Randy starts talking about the new wrap on his boat and truck:   King’s Home.

I nod politely, but after being a crime reporter for so long I’m mainly paying attention to what’s going on with our neighbors bathed in red lights.   Some of the worst outcomes I’ve had to cover have all been domestic dispute calls that suddenly went bad.   I’m impressed that whatever town we are parked in has sent three patrol cars, including K-9, to answer the call.

“What’s that,” I ask and back up a bit to actually look at the wrap, and see it.

Then Randy answers with this, “It’s a home for victimized, abused, frightened boys and girls, they even have Hannah Homes for abused women.”

Been here, done that.   By now I’m becoming more aware of what I call messages from the universe.   And this one, was a 2×4 upside the head.

I’m standing watching a domestic dispute police action while leaning on the truck of an angler sponsored by a group who provide safe haven for victims of domestic abuse.

See what I mean about this universe thing.

So I pat Randy on his shoulder and just say this, “Dude”¦you’re up”¦King’s Home, we’re going to do that story.

When King’s Home sponsored and wrapped Randy’s boat they decided to give the boat a name.