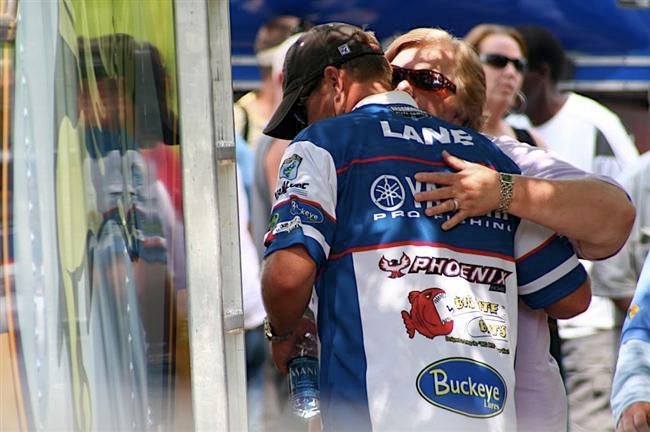 Where’s the game in life

Dateline:’  An Open Letter to my Roommate, Russ

Dude, you are a professional on the lake of play, you have the physical skills to be here.

The courage it takes to be a parent.’  Courage to always put others before yourself.’  Family.’ ‘  God.’  Country.’  Russ.

As it should be for us all.

There is no courage swinging for the fences when you put your swing before others.’  That’s cowardice.

When the family floats on every cast, consistency, confidence rules.’  You can’t be a day three angler on day one.

You got, day three.

If you are looking for a sign from the “coach,” here it is my friend.

For the past several days we have talked of family, life, love, sports and winning.

I called you, “coachable” and I don’t throw that word around lightly, for in sports, I believe that word to be, sacred.

You can have talent.

You can have speed.

You can have strength.

You can throw all the heat you want, but if you are not, “coachable” there will be no “Halls” in your future.

I know this because Hall-of-Fame Pittsburgh Steeler Head Coach Chuck Noll told me so.

Years and years ago I did a TV show with Coach Noll.  I did it with him about a week or so before he was inducted into the Pro Football Hall Of Fame.

We did it inside the shrine at Canton.  Between interviews and location shots the two of us walked alone through the whispers, that is the history of the game.

I would walk and talk with him, turn to look at him, only to see that he had quietly stopped several feet behind me at a bronze bust, or exhibit.

And there he would stand.  Arms folded across his stomach with one hand, his right, holding his chin.  The only thing I would say then, was nothing.

I gave the coach, his past.  It was due.

And then he would turn, and slowly walk down the aisle, head down, reverence for the memories still playing within.

I stopped when he stopped, and I listened when he talked, I asked nothing, I told myself, “Shut up; just absorb.”

And this is what he told me after every stop, every time he spoke of the busts of bronze he, at some point, would use the word, “coachable.”

He would always punctuate the word with his right index finger.  “Coachable.”  Right finger and thumb held together, bang, as it made a period in the air.

Russ, as you are out there right now on Lake Murray, and not sitting at the dining room table across from me, you couldn’t see this, but my right index finger and thumb came together and dotted the air for you my friend.

Be proud of “Coachable.”

I only saw Coach Noll draw on the air blackboard one other time, he would use the same punctuation when he said the simple word, “game.”

Years later, on a rainy night with drops creating rivers on the windows of the charter bus I was riding from Manhattan back to the ESPN campus with my friend Bob Ley sitting next to me, in the drops I could see Chuck Noll’s face, feel his hand on my shoulder, the gentle squeeze, the slight tremble.

And I know why he never answered.

Back then while standing in that Hall, I was still green, not beaten up and busted yet, no battle scars, no deep losses, no high wins, Coach Noll knew that if I had to ask that question he didn’t want to say this to me…

You got, no game.

As your roommate, as your coach, as now a dude with close to 30 years in the business, as a guy who has been busted up, turned inside out and flung like a rag doll up against the wall and halls of journalism, let me tell you this, let me tell you about…Game.

You got, almost game.

And I just haven’t called you out my friend, I have just placed my hand on your shoulder, squeezed gently, trembled some.

Watching the river of rain drops as the bus crossed the Cross Bronx Expressway coming back from the Sports Emmys, I found what Coach Noll, knew.

If you are playing sports for the crowds in the stands, you ain’t, got game.

You got, Game, if you are playing sports, for the crowds in your head.

If the crowds in your head cheers when you take to your field of play, you ain’t, got Game.

If the crowds in your head, are silent…

…then, and only then…

In time, when all 3 C’s line up for you every time, every launch, every cast, every weigh in, then Game, will come to you.

You told me that every once in awhile while you are out there competing, there is a magic moment, a time, a feeling, a knowing that you are perfectly lined up in how the universe works, and you said that you, “know what the fish want thrown and when you throw it, whack, they crush it because I knew what they wanted to bite, just absolutely knew as if I was the fish down there.”