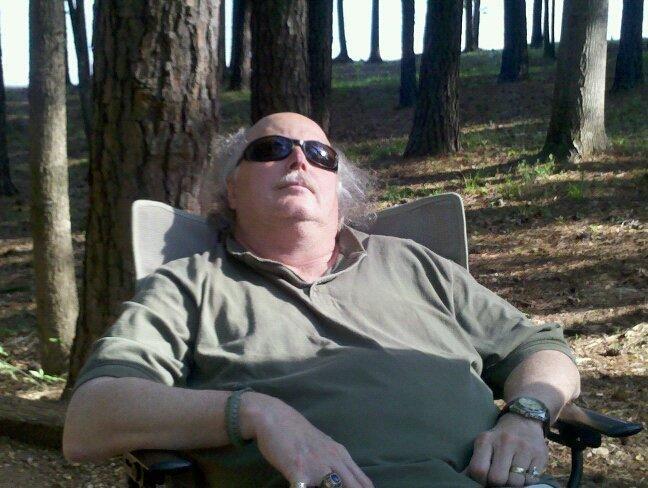 “Your time has come to shine”¦”

I’m slumped in a chair.

The photo of me was taken by my good friend, Kerry Short.   If you know me personally, and you look close at that photo, you will see a busted up db.

In the photo, behind the Costas, is a beaten up, emotionally and physically drained, me.

In the last 10 or so days, I have had my ass kicked emotionally and physically.   Mostly emotionally.   Eight to ten Advil a day takes care of the physical issues.

Tequila and crushed ice could numb it all, but reaching for that would start an even bigger problem”¦so I left the portable db bar and Frozen Concoction Maker in the db/bb/rv.

And then I left the db/bb/rv in Cullman, Ala., with a homeless family who could use it.

Quit saying good things about me doing that, it was something that I could not have NOT done. I had no control.   As my wife Barb said, “It’s the human thing to do, humans helping humans, no North vs South thing, no color issue thing, no poor vs rich thing, just the right human thing to do “¦ ah but Hon, please clean the inside of it first okay.”

The human thing to do. So I did. Maybe not so much on the cleaning.

I walked into the hotel last night in LaGrange, Ga., and just between you and I, I’m going to man up here, I turned on the shower, stood in it for as long as I could, and then found myself just sitting in the tub with the shower running over me.

Freud would have a field day with that.   If you are a psychiatrist, psychologist, or counselor don’t call or email me about that confession.   No offense, but I don’t care what you have to say.

I’m in charge of my own mind, and trust me, you don’t want to be in here with me about now.

I know what the hell happened, I went off the path, fell off the wagon, and the universe sent me a little bit of hair of the dog medicine.

I have been in a funk most of this season, just ask the people here real close to me, db’s body is here not sure db is though would probably be the consensuses.

And they would be right.

I miss my family, my wife, my daughter, my son, and the dog.   Truth be told, without them around me, especially my wife of 37 years, Barb (bb of the db/bb/rv), my time of doing this is becoming shorter and shorter, may take a job selling cars just so I can smell her perfume everyday, can have my son hardly talk to me every day, miss my daughter in Austin everyday by still walking in her old bedroom, have the dog lick my face everyday.

I have walked away from careers before, and may do so again.

And here’s a secret that may shock you, WILL shock my family.

Couldn’t walk into my house, and then turn around and once again, leave.

I was leaning up watching the anglers bring their fish backstage, watching them as the were about to take the stage, thinking how I would miss them, what would I do next, what would I say to Jerry McKinnis, to Todd Hammill, Terry Brown, Jason Sealock, Glen and Keri May.

How do you say, done.

When suddenly, my friend Kelly Jordan walked up to me.

“”¦and all your dreams will run their way”¦”

When Kelly told me, “I have cancer,” it was the beginning of the hair of the dog from the Universe.   The beginning of two weeks of soul searching, disasters, and incredible outpouring of kindness.

It began here with Kelly’s story: “Came Horror In The Wind

It was my friend, KJ’s plight that got me back on the plane to come back, even though I sat motionless for most of the flight, missing home.

So I get back to Little Rock, and my two best friends on the tour, K-Pink and K2 pick me up at the airport, after a Mexican dinner and a Margarita or two, I get back in the now falling apart db/bb/rv, and head to the next assignment;   The B.A.S.S. Central Open No. 2 in Table Rock, Kimberling City, Mo.

Then came the next, upside the head from the universe.

“Beneath The Wind” was the first story of a week of disasters that I would go through.

I didn’t know it then, but it was the beginning of a week that would end with the photo that Kerry Short took of me exhausted in a chair.

The beginning of the message week.   Delivered by the Universe

Followed by “Comfort, In The Storm.”

All of that in just the space of seven days.

But the Universe wasn’t done.

Then came, Cullman, Ala.

How do you write about a 48 hour period that may have changed your life?

How do you write about a 48 hour period, that into your life, faith came back?

I knew of the first two.

I doubted the last one.

In the mirror, I only saw somebody who I thought sucked.

I think the universe saw it as well.   So from out of the sky, came a test for us all.   By the boss of bosses.

I don’t believe in chance, nor luck.   I believe things happen for a reason, if I didn’t really believe before, I do so now.

It began on Facebook, the Guttenberg Press of our children.   “Friend” me if you want to see it for yourself, but when the universe came after me it did so through the keyboard.

I had never heard of Cullman, Ala., but I had a Facebook friend, and actual real life friend named Kim, who it turns out was from there.   I had visited her once, but didn’t really know where it was that I was.

That happens a lot.

Kim started talking and showing photos and videos of the tornado that destroyed her town, her neighbors, her family.

For some reason, I don’t know why, I went to Cullman, Ala.   Ended up leaving a part of me there, both physically and mentally.

I am now a part of a town I never knew existed. I love a town that I spelled the name WRONG the first two times I wrote it.

I didn’t know where the town was, but it was here, in Cullman, Ala., that I found myself.

Stopped being a schmuck.

Regular ass humans “¦ not the government “¦ not the media “¦ got faith once again, in you.

And through that, came this:   “A Field of Tears”

The story that at the end of my career, I will look back on as maybe the most important story I will have ever done.   Not because of how it was written, or the photo’s taken.

The Universe challenged us.   Us humans.

Challenged us TO BE HUMAN.

And you responded.   You cut trees, you brought clothes to those with hardly any left, you brought water, food, supplies.

Up until this point in time, I failed.   I’ve covered disasters before, man made, universe mad, but I never did so as a HUMAN.

The Universe had had enough of that.

I drove into Cullman, Ala. as a Media.

As the universe knew it should be.

And frankly, I don’t care either way, as I will probably be long gone in the biz by then.

As I drove to the next event, here in LaGrange, Ga., in a truck borrowed from LeAnn and Gerald Swindle, Elite Angler and Elite people, I listened to the song now playing in the Sennheiser head phone cans on my head, “A Bridge Over Troubled Water,”   about 30 to 40 times.

It was the only song I listened to as I drove here “¦ had it on repeat on the iPod.

I will continue to write for awhile

I will continue to be a media for awhile.

I will continue to be a human forever.

The universe showed me that when it calls, I will come with keyboard and camera in hand, but it will be in the hand of a human.

A human not afraid to put the camera, put the pen down, and pick up a chainsaw.

As the universe knew it had to be.

And as now I know it has to be when humans use the internet to reach out and call for help.

As Cullman, Ala. did.

And that help will come, as humans helping humans.

Because Barb told me to.

And the universe seconded it.