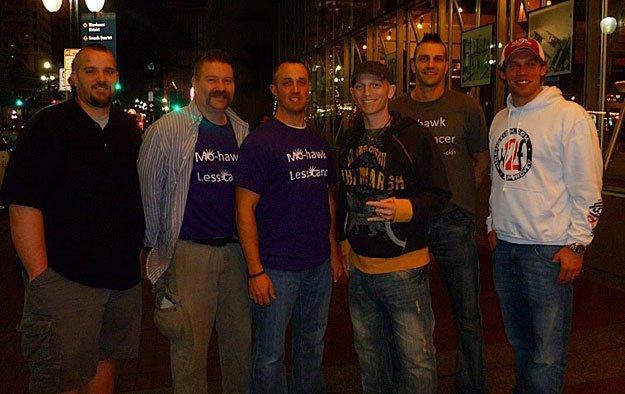 The sidewalks were of cobblestone, the people of feathers and masks.

A white truck with a brushed aluminum grill cooked sausages among the pots of jambalaya.  Brown sauce coated the rim and dribbled down the side.

A hotel doorman with a top hat and a broom swept blue plastic beads into the gutter.  Sneakers and high heels waited on the curb for the cross sign to turn green.

Bars that opened to the street filled the alleys with laughter and the sound of ice cubes twirled by straws, outdoor cats were curled up sleeping on a green dumpster, a woman wrapped in a blanket sat at a bus stop, one elbow sticking out of the frayed cloth, she was singing a song , only she knew.

I walked, hands shoved in my sport coat pockets, amongst so much life, so much color, every block washed in it’s own signature jazz beat.

Just another drunk, who went too heavy on the Mardi, and the Gras.

Except I was flat out sober.

To the crowd, I was the drunk on the yellow gaslight steps, invisible to those who walked by. A block later they would only remember the gaslights, not the man underneath.

I was of the street, not on the street, lost as I was, in plain sight.  Which is how I needed it to be, how I hoped it would be, because at this moment I needed life, to wash over me.

Cleanse me of the question I just asked another human being.

Cleanse me of how the man of quiet grace, answered me.

And a see through man on gaslight steps, who kept hearing the answer blowing on the wind of jazz.

Under the gaslight sky, all I could stare at was the calendar on my Droid that showed me, April 2011, was only 6 weeks away.

And no Mardi Gras mask, would have hid my tears.

When The Flame Goes Cold

There are those amongst us who are heroes.

There are those amongst us who are angels.

I believe them to be one the same.

There are people on this planet put here for the sole purpose of saving us, from ourselves. They run to what we run from.

They hold, what we won’t touch, when all else fails, theirs is the face you will see.

His is the face that will crawl through the smoke to find you, his charred and soot smeared arms, the ones that will carry you to safety.

When all others have left you behind, it is he who will come for you.

In that split second when it comes down to between you, or him.

He is a Waukegan Firefighter and a Paramedic who will stand in harms way to protect you. The man with icicles hanging from his mustache as he battles a fire in the Wisconsin winter.

His name is Kevin Oldham. Kevin will be 34 in May, if May comes for this young man.

He is a son, a husband, a daddy. Married 8 years to Katherine, daughters 3 year old Stella, 18 month old, Evelyn.

And Kevin Oldham, is dying.

“The doctor told me that I have Pancreatic Cancer, stage 4. Ninety-five percent of the people who get that diagnosis, don’t make it.”

And with that the Waukegan flame grows cold.

Kevin matches the color of the gaslight steps I now sit on, the edge  of which I just rub with my fingers as if trying to put the color back in this young man’s sunken face.

Now, he tells me, he can’t even do three pushups.

I have long since been able to look into his eyes, so I pretend to be writing notes, but I’m just buying time.

For this young man is much, much, stronger than I.

“The only sport I watch, is professional Bass Fishing,â€ he said. â€œI love to fish, I have an â€œagreementâ€ with Katherine that I can go fishing once a week. Bass fishing is my favorite. Love it, but I don’t do it as often now.”

For Kevin the Bassmaster Classic, “is like the Super Bowl for a massive NFL football fan — never — never thought I would ever be at one.”

This is a gift. From his friends. Waukegan firefighters who got together, pooled their money, and brought their ailing brother to this, Kevin’s Super Bowl — The 2011 Classic.

“I’ve worked with these guys for 10 years. We would run together into burning buildings to save people. Now (Kevin is not looking at me, but at his fellow firefighters who are sitting nearby) — now they are trying to save me.”

Kevin is part of Code 3 For A Cure.

“We take a fire truck around and stop and talk to our brothers all over the country and we tell them,  Get Checkups, go to your doctor if you don’t feel right, have things checked out. Don’t push it off, if you catch it early, many times you can cure it.

“By the time they diagnosed my cancer, it was pretty late, in fact one of the things that bothered me the most about all this is it took a while that day for all the tests to come in, and my wife was sitting in the waiting room, and by the time the Doctor came out, she was all alone, and when she saw the doctor, she knew it was bad — and she was all alone.”

A couple years ago I did a story with Gerald Swindle called, “A Livewell For Tony,” and it was about how Gerald lost his beloved brother, Tony, to Pancreatic Cancer.

One of Kevin’s friends knew about his brother Tony, and knew how big a fan of Gerald, Kevin is, so he made the call to Gerald.

“He asked me If I would call Kevin, and just talk to him, about fishing, about cancer, about his disease.”

I know Gerald, the G-Man as he is called, I know him as the man he is, off stage.  As a caring, loving, emotional human being, the bravado of the stage is just that, this is a man who still has date nights with his wife, Le Ann, who looks everywhere but into your eyes when you talk of his brother, Tony.

“db, I wasn’t going to make the call. It just brought up so many old memories, Tony went through all the same things.”

But Gerald, made the call, “It was the hardest phone call I ever made, I’m talking on the phone and Le Ann is laying on the bed next to me listening, and she is crying.”

And then came this.

“But I’ll tell you, Kevin is a special guy, I think I got more out of the phone call than he did.”

Gerald pulled the rim of his baseball cap down, and only looked at the ground, not at me. I told him, thank you for talking to me, and that I loved him, rubbed his shoulder as I left his table at Media Day, and out of respect, didn’t ask what he said during the toughest phone call of his life.

Left those words to be just between Gerald, and Kevin â€¦ and Tony.

As I sit on the gaslight steps I knew I wanted you to hear the exact question I asked Kevin, so you would know, why I did this story.

Because, if you believe in Angels.

Because, if you believe in Heroes.

Because, if you believe in God, you need to know Kevin’s answer, to the hardest question I’ve had to ask in my life.

Me:  “I know this sounds strange, possibly horrible, but in a weird way isn’t a diagnosis of stage 4 cancer, possibly a death sentence, in effect really, a life sentence â€¦ a sentence to live.”

When you ask a question like that, to honor the person being asked, to give that person the dignity they deserve, you look them straight in their eyes, and you give them the time, however long it may take, give them the time they need, to answer.

And with that single word, came the peace I was hoping to find, the peace many of us need to know, hope to hear while we also struggle with, or have struggled with, loved ones with lives measured in minutes, not months.

“I don’t care what it sounds like if I want to tell my family, my friends I Love You — I do! I don’t care if they are guys — I love them and I tell them that. Don’t get me wrong; I’m a fighter, and I plan to beat this, plan to be here way past April of this year, but just in case, let me be clear — it’s the worse possible scenario in the world, but it is also a blessing. It can be the best year of your life, db. I look at it as a blessing. I get to say GOOD BYE, and I get to do it, my way.”

And Kevin’s way is this — in a canoe.

“I love to fish, so we are going to have a canoe, filled with memorabilia of my life.”

The sidewalks were of cobblestone, the people of feathers and masks. A clown on stilts just walked by my gaslight steps.

This is not a story about dying, but about living. Masked, or unmasked. As I watched life draped in purple beads around me, the dragons and the beasts, the trumpeters and the saxophone players, the man in the top hat who swept the street, I realized, for all of us, April too will come.

For all of us, on the calendar we use to count life, there will be a month when our calendar, flips over no more.

We all, have a due date of our life. For some, that due date is circled. For most, it is just a mystery.

As I left the step, and walked back to my hotel to write this story, I knew that I would try to live my life as Kevin now lives his — filled not with cancer, but with love.

Promise to not just hold, but to embrace the loves of my life, and to embrace life as well.

Walking back to the hotel through the Mardi, and the Gras, I stopped only once at Canal and Bourbon Street.

Stopped, to watch a green sparkly feather rise up from the cobblestone, and float gently into the sky.

“Yes, how many years can a mountain existBefore it’s washed to the sea.”