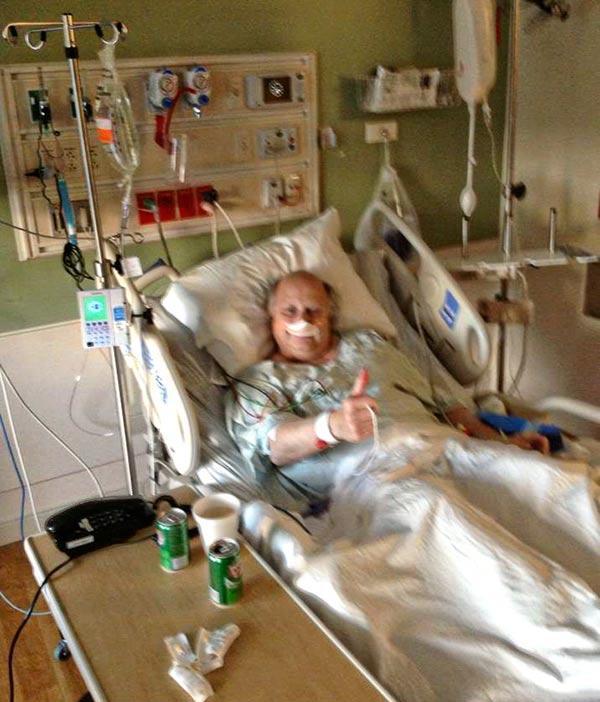 If you’ve got cigars, light them.

If you’ve got beer, pop the top.

Pull the cork on your wine bottle, get into your after-work sweats, ’cause I’m going to tell you a true story that happened to me “¦ one that even I don’t understand.

It’s about a moment in time, two moments in time that may have changed the rest of my life.

If I somehow get my mind around it.

Going to be a lot of people out there who will believe it and know why it happened.

Going to be many out there who won’t.

Back this puppy up a bit, give ya’ll some insight into what I’m fixin’ to write.

This was supposed to be a story, a funny story of all that I’ve been through in the last 5 weeks post-brain surgery.

Me and my friends at Wired2Fish.com discussed a story that would tell you folks that I’m ok, and I’m baaaack!

Me: “Dude I’m on so many hormone pills that I was reading the Victoria Secret Catalog, FOR MYSELF”¦been looking sort of lovingly at Barb’s Purple Pump shoes as well”¦”

Me: “Dude, not even close. I can’t taste a thing so I started eating fruit and yogurt and other healthy stuff while it won’t hurt.  Trust me, not going to waste a donut now.”

That’s what you were supposed to get, but in-between me talking to W2F, and writing this, something happened.

Something that shook me to my core.

Something that has made me question, everything.

And that’s the story you’re goin’ get.

Five weeks ago a team of surgeons went about removing a brain tumor that had formed around my Pituitary Gland.  The team consisted of a Neurosurgeon, An Ear, Nose and Throat Doctor and an Endocrinologist.

Highly trained folks who have done this stuff many times before.

To get to the tumor they went up through my nose, my sinuses and up to the base of my skull, which they bored through to get “to the promised land” as my ENT Doc told me.

I had surgery on Wednesday and went home on Friday”¦a total of 55 hours in the hospital for Brain Surgery.

Because some of the tumor had grown into my optic nerve and surrounded my carotid artery, they left some of the tumor in, not wanting to risk taking it out manually, rather instead using radiation to get at it.

Before I left the hospital they took a CAT scan of my head to see just exactly where the tumor left behind was, and from that they proceeded to tell me that I would need treatment from something called a “CyberKnife.”

Last week my wife, Barb, and I met with the Radiological Oncologist who told us about what was being planned”¦I was to have an MRI with contrast stuff shot into my arms, then he would meet with the Neurosurgeon they would map out the “plan of attack” and on February 6th I would begin the radiation treatment.

I was assured it would be done one week before I have to leave to cover the Bassmaster Classic.

Making the Classic was all I cared about, so I signed the papers and the process began.

Ever since surgery up my nose, my nose has been massively stuffed up, brutally stuffed up, and Tuesday night I woke up barely able to breathe through it.

As I laid in bed my head felt like it was about to split open”¦my eyes hurt, my temples hurt”¦I can take a lot of pain, but this was beyond reason.

Tears ran down my cheeks, it actually hurt so much I starting quietly sobbing, and then I did something I never thought I would ever do.

And here’s the exact prayer I said:

Then I reached over to the nightstand and took a handful of pain pills and basically knocked myself out (don’t do that at home).

Most wouldn’t call that much of a prayer.

As a writer looking at it, I think it borders more on a pleading or bargaining with the heavens.

But from a person who hasn’t said a prayer, hasn’t recognized a God since First Communion, all those above who might have heard it would be shocked enough to give it prayerhood.

Wednesday morning, while still pretty groggy from the several pain meds still floating through my system, I had pretty much forgot my nighttime coming to Jesus moment, mainly just happy Barb was home for the day, a “snow day” as her school was closed due to a storm.

I was sitting in the living room, Barb was in the kitchen when the phone rang”¦she was closest to it so she answered it:  “Don”¦it’s for you”¦”

As I came into the kitchen to get it Barb told me, “It’s your Neurosurgeon”¦” and watched as in front of my eyes the color drained out of her face.

Normally his office staff calls me, this time the doc himself was on the phone “¦ it wasn’t going to be good news.

“Don … I have something amazing to tell you. I’ve cancelled the CyberKnife treatment.”

I didn’t say anything.

“The tumors in your head are gone. there’s no need for the CyberKnife.  Come see me in 6 months, and we’ll do another MRI to make sure they don’t come back, but right now, you are tumor free.”

“How could that be; how do you think it happened?”

“I have no idea, they were there, and now they are not.”

“”¦that he doesn’t really understand”¦”

So as I write this, the tumors that were left in my head, are gone.

There is a CAT scan taken the day after surgery that showed them.

There is an MRI taken 5 weeks after surgery that doesn’t show them.

I’m sure there are any number of scientific answers to where and why.

But to me, there will always be only one answer, the prayer I said through my tears.

But to me there will always be only one answer, the prayers you said for me.

But to me there will always be only one answer, all the positive energy that came my way was more powerful than any CyberKnife.

What if FAITH “¦ is actually matter, particles of something, like light.  And those particles did come my way.

I will never forget that moment on the phone when the doc told me I was “tumor free” and the first thought that came into my mind was exactly this, “Thank you for listening to my prayer.”

Folks, right this moment I am tumor free and no one can really explain why, it was there and now it is not.

I’m sure the docs will someday explain it to me, and I will sit there and graciously listen, but I already know the answer,

and I hope you do as well,

the answer is in the prayer I said that night,

the answer, is Love.

And if I didn’t wholly believe that before, if I was only playing lip service to the universe before,

the universe proved its point,

when it kissed my forehead,

and the tumors disappeared.

“”¦maybe I’m amazed at the way

I really need you.”