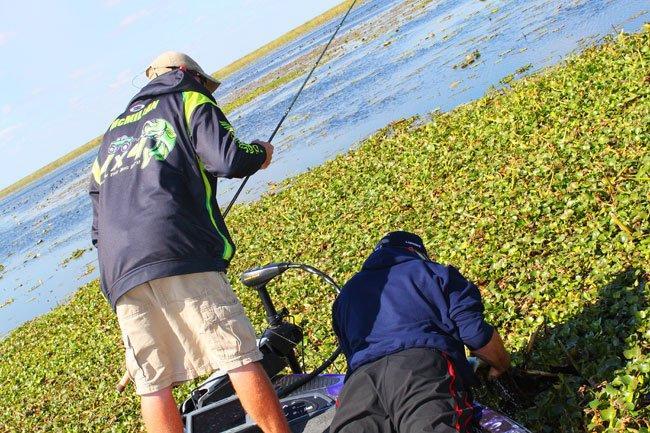 Few people outside the fishing world can understand the relationship that you have to have in order to fish with someone. And I don’t mean just going out to the lake for a Sunday afternoon to burn a few hours. Iâ€™m talking about trust. Full disclosure. The kind of relationship where you know you can tell or show each other anything and also know it wonâ€™t come back to haunt you.

It’s often associated with a father-son or brotherly relationship because thatâ€™s where it usually starts. Years of trust are poured into a partnership before either partner really knows whatâ€™s happening. And by the time it comes down to needing to trust someone out on the water, itâ€™s just second nature. Relationships like this donâ€™t come about very often outside of the family. But if they do form, water can be thicker than blood. A friendship forged through fishing is one of the most powerful there is.

Very few of these relationships start in the heat of battle. Few begin on the first day of a major tour event between two anglers standing in the front of their respective boats competing for $100,000. Usually thatâ€™s when the gloves come off â€“ when it’s kill or be killed and win at all costs.   Tournament fishing has become a cut throat sport. Pure love for the game isn’t felt by all of the upper level touring anglers. It has become a means to an end. And screwing over the guy fishing 100 feet from you is a common practice.

So both Randall Tharp and Brandon McMillan had reservations when they met on their best stretch of Lake Okeechobee vegetation a little over a year ago. It was the first day of the Wal-Mart FLW Tour event in February. The two met a few years back, but didn’t really know one another at all. And through no other means than assumption, they both knew they were about to be screwed over.

But it didn’t play out that way. Tharp and McMillan met halfway down the hundred yard stretch they were both fishing, and then they politely went around each other, made their way to opposite ends and turned around and made their way back again. This continued throughout day one. Each time, the both knew this would be the pass where something went awry. But it didnâ€™t. And with each pass a bond began to form. After a whole day of fishing like this, McMillan knew he didn’t have to worry about Tharp and Tharp needn’t worry about him.

The two met on the same stretch on day two. Day three and day four started the same way as well. Neither angler ever crowded the other or intentionally tried to catch one that the other missed. On day two, it even went as far as McMillan loaning Tharp a flipping stick after he broke one of his own. That rod helped Tharp catch 32 pounds that day. Each did their own thing, to which McMillan credits their success.

â€œI had already made up my mind before we fished past each other on day one, that if he was going to be a jerk, I was going to be a jerk,â€ McMillan said. â€œThatâ€™s just the way things go now a days. You donâ€™t really expect a lot of respect or loyalty out there. But he never gave me a problem, so I never gave him one. After day one, I never thought twice about it. It could have gone a lot different if weâ€™d both tried to mess each other over, and neither one of us would have done as well as we did.â€

Trust starts with respect. Both anglers showed a boat load of that by treating one another the way they did and ultimately the duo finished the event in first and second with McMillan pulling off the win. Knowing that very few fishermen would have handled the experience the way Tharp did really impressed McMillan. 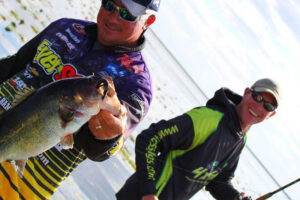 Tharp saw the situation the same way. He just knew that McMillan would burn him if he got the chance and yet he never did. And as Tharp watched McMillan win the event, a great respect developed within Tharp not only of McMillanâ€™s skills on the water but also for the man he is and the ethics by which he fishes.

â€œIâ€™ve left Okeechobee a lot of years mad or unhappy with the way I fished, but last year I left the lake satisfied,â€ Tharp said. â€œI was happy finishing second, and happy that Brandon won. Iâ€™m never happy about finishing second. Itâ€™s hard to explain, but I was just really happy for Brandon.â€

Tharp, like many anglers, has been burnt before by people he thought he could trust. People who swear not to go back to his hard-found honey hole and still do. Fishing is competition. And competition, unfortunately, brings out the worst in some people. Naturally heâ€™s developed a thick skin to envelope what he does on the water. Trust isnâ€™t something that comes easy for Tharp.

â€œI think there are a lot of guys out there that share information, and Iâ€™m sure there are a lot of guys that trust somebody. I usually have a real problem with that, and Brandon is one of the first ones I have ever trusted,â€ Tharp said. â€œItâ€™s really weird, but I knew from that point on when we fished against each other last year, that I could trust him about anything. I feel like in what we do, that kind of trust is a very rare thing.â€

The trust spawned a friendship which developed into a partnership out on the water this past winter. Tharp and wife Sara relocated to Okeechobee like they did last year to winter there and fish the lake for a few months in preparation for the EverStart and FLW Tour events. Within the first couple days, they had already been out to dinner with McMillan and his new bride Brianna. While the ladies chatted about whatever ladies chat about, the boys talked fishing. They started fun fishing together shortly after that and entered into a local team tournament to feed that competitive urge.

Once word got out that the two big sticks would be fishing together they were deemed the â€œDream Teamâ€ by the other anglers planning to participate. Everyone gave the duo a hard time stating they might as well not even waste their time and money, Tharp and McMillan were sure to win. The truth is the Dream Team might as well have not even weighed in. Their measly 19 pounds garnered a lot more ridicule than winnings and two of the most competitive fishermen on the lake replaced a victory dinner with a plate full of crow.

But the â€œdream teamâ€ didnâ€™t give up. They set the record straight with their next tournament outing bringing in a whopping 34.64 and winning the event with big smiles on their faces. Brandonâ€™s father Jimmy and little brother Dillon looked on with pride as they finished in third with more than 30 pounds themselves. The day couldnâ€™t have gone better. 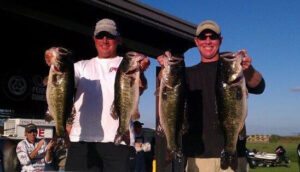 Then tragedy struck. Brandonâ€™s father Jimmy was murdered a week later. Instantly Brandonâ€™s life was turned upside down. In an instant nothing made sense anymore, and fishing was the last thing that Brandon wanted to do.

â€œThat was our thing,â€ McMillan said of fishing with his father. â€œWeâ€™ve always fished Okeechobee together. That was our place.â€

Understandably, McMillan didnâ€™t want to go back out on the water. There would be no way to make a single cast without thinking of his dad. No way to fish a spot without seeing his face. If he caught a big bag, he wouldnâ€™t be able to pick up the phone and call his dad up to tell him about it. There was just no point.

Though his family encouraged him to get back out on the water, he just couldnâ€™t. He knew that would be what his father wanted, but it was just too much. Ultimately it was Tharp who convinced him to get back to fishing.

â€œAfter all that happened, I didnâ€™t want to fish at all,â€ McMillan said. â€œI could care less about fishing the EverStart or the Tour, but my family kept saying â€˜You have to do it for your dad.â€™ I didnâ€™t know what to do so I asked Randall, what he thought I should do. And he told me if I couldnâ€™t put my whole heart into fishing and get my head right, then I shouldnâ€™t do it. And thatâ€™s the main reason I fished them. That and the fact that I wanted to beat him. My whole goal in life now is to beat Randall.â€

Well McMillan didnâ€™t beat Randall in the EverStart or Tour Open this year but he did bring home solid ninth- and fifth-place finishes, honoring and bring pride to his fatherâ€™s name. Tharp finished an impressive second place at the EverStart and dominated the Tour Open, winning by more than 23 pounds. Odd happenstances in both events just added to the chemistry brewing between the two. The first day of the EverStart found Tharp and McMillan tied with exactly 19-12 and day one of the Tour Open had them atop the leaderboard 2 ounces apart with 33-7 and 33-9.

McMillanâ€™s wife Brianna confessed to FLW Outdoorsâ€™ host, Jason Harper that she feared the two had entered into some sort of â€œbromance.â€ I asked McMillan if he wanted to defend himself so in my best effort not to misquote him Iâ€™ll write out his exact words:

â€œSomewhere in the story can you please put that Randall and Brandon are happily married, I donâ€™t want people getting the wrong idea.â€

After pausing just a second, he realized what he said didnâ€™t sound like what he meant and added, â€œYou know what I mean,” with a laugh. â€œWe are happily married to our wives. You writers will misconstrue anything.â€

We get the point, and all of America has been put on notice about the Batman and Robin, Starsky and Hutch, Ponch and Jon, or whatever dynamic duo fits the mold for these now famous Florida-fishing anglers, friends, and brothers in the sport.